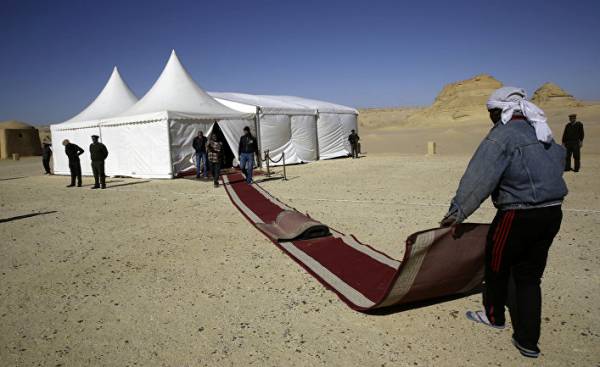 Cairo — the Red carpet still lies ahead officials in Egypt. “A curse will haunt them”, causing frequent attacks of social network users in the country.

The situation that caused considerable resentment among the Egyptians, is spreading a red carpet (with high price) for the passage of the highest officials in Egypt. At the same time, the government assures that it applies the strict measures of budget savings of the country, trying to cope with the deficit.

On Saturday evening these photos were leaked on the social network: the desert was carpeted with red carpet in honor of the passing of the Egyptian Minister of antiquities Khalid al-Anani and his accompanying delegation during the announcement of the beginning of archaeological research 28 mummies in the province of Minya.

Thawra_Tajmana (“the revolution will bring us together”): the red carpet for the Minister of antiquities to visit the excavations in El-Minya cost 6 million pounds

The authenticity of the images could not be verified, but the Ministry of antiquities of Egypt until the evening of the resurrection has made a statement which might explain or deny the matter.

Previously a similar incident. Criticism of the delegation of the President of Egypt Abdel Fattah Khalil El-Sisi. During the opening of a number of infrastructure projects in the West of the capital in February last year, before his delegation was spread a red carpet of a few kilometers. In their statements, the Al-Sisi urges local citizens to austerity, spending cuts and rationalization of consumption. The most widespread such statements are received in social networks, where the President informs people about the poverty of his country: “We are very poor”. These words were spoken during the youth conference in the South of the country in January last year.

The next day, social media users launched a hashtag #Myocardia. Reigned discontent and outrage, but government officials refused to recognize their activities “wasteful”.

Amir Abdullah on his page in Facebook published these words: “roll out the red carpet in the desert in order that the Minister is not spoiled and does not dirty your shoes.”

Ahmed al-Qadi Twitter also wrote: “During the visit of the Minister of antiquities in honor of the new archaeological discoveries in the desert sand is covered with carpets. However, many ordinary citizens are sleeping under bridges with no covered… You remember that we are very poor”.

The price for one square meter of carpet of average quality in Egypt ranges between 15 and 18 pounds (about one US dollar). The cost of laying carpet in length, one kilometer is approximately 18 thousand pounds (about 1000 dollars).

It is unknown whether these carpets are specially purchased for the visit of officials and, therefore, are now the property of the state, or were awarded a contract for the rental with one of the private shops.

A luxurious red carpet is synonymous with world famous film festivals, the passage of stars and celebrities in the spotlight, being the center of attention and in front of the camera. In addition, it also spread in the arrival time of the officials in the airports during important visits in other similar situations.

Over the last few months the government of Egypt pursued economic policies that have an inflationary effect. The most important of them is the liberalization of the exchange rate of the pound against foreign currencies, as well as the introduction of VAT, increase in electricity prices and reduction of subsidies on fuel and other products. 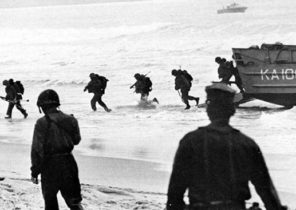