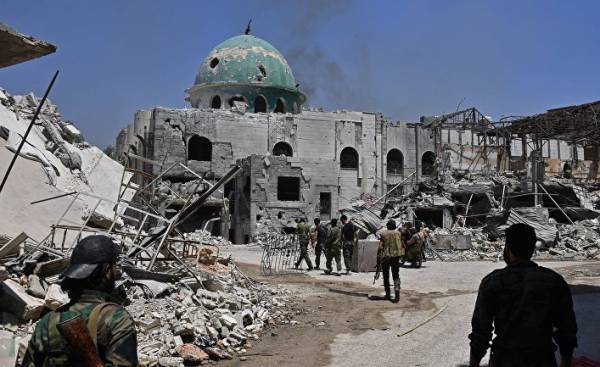 The leader of the movement “Ahrar al-sham al-Islamia” Abu Ammar said that three years ago the Syrian army, which would be subordinate to the regime, virtually non-existent due to military operations, which opposition groups carried out against the army.

He also stressed that the dependence of the regime from Iran and Russia have turned a popular revolution against a brutal authoritarian regime in a difficult international problem and contributed to prolonging the war, causing great suffering to the Syrian people.

Abu Ammar said that ignoring the Russian-Iranian influence in Syria from the international community will lead to the expansion of the boundaries of the conflict because of the expansionist ambitions of these two States.

He noted that the recent massacre in Khan Sheyhun in which the regime used internationally banned sarin gas, is the most striking example of the dependence of Bashar al-Assad from supporting Russia to the extent that he neglects the norms of international law and the international community. The latter is possible due to the guaranteed use of the Russian veto in favor of the regime.

In addition, the leader of “Ahrar al-sham” stressed that the increase in scale of the Russian-Iranian intervention in the country would make it impossible political settlement of the conflict not only in Syria, but the conflict at the regional and international levels.

According to Abu Ammar, factions of the armed opposition managed to destroy the Syrian army, since most of the units come from the authority of the regime, after which the latter had to engage in a war of your clan members and not rely on the Hezbollah fighters, “the Islamic revolutionary guard Corps the” Iranian, Shiite militants in Iraq, Afghanistan and so on.

He added that, despite this, the revolutionaries were able to defeat these forces and achieve a major strategic success before Russian troops intervened in the conflict, focusing on its air force and using scorched earth tactics, thanks to which the regime was able to move in some regions. Despite this, opposition groups still play a leading role in a number of areas.

On possible offensive in Idlib province in Northwest Syria, Abu Ammar said that this is not the first time when the forces of Bashar al-Assad carried out a similar military campaign. At the beginning of last summer, the army regime, and the subordinate militia units conducted military operation, which has moved to the village South of Aleppo in an attempt to reach Idlib province, but this operation failed miserably, and the Syrian army suffered heavy losses.

It is expected that this time Russia will participate in the operation, and the new is that in addition to Iraqi and Iranian militias used by Russian terrorist organization “Democratic Union”. As noted leader of “Ahrar al-sham”, Russia uses this operation as a tool of pressure on its competitors.

In his opinion, the extension of the influence of these militias aimed to establish control over the border with Turkey, and as a consequence, to harm the forces of the Syrian revolution and to threaten the security of Turkey. He confirmed that if the operation starts, the opposition groups will respond to this aggression and to inflict defeat, but also praised Turkey’s role in the Syrian revolution. She always stood on the side of the Syrian people.

However, Ankara has paid for his position, great price when on Turkish soil, a series of explosions, as well as a coup attempt. In addition, Turkey is under pressure from a number of international organizations.

Abu Ammar said that Turkey is adjacent to the government, the people’s revolution which owe her. It is the hallmark of relations between the two countries and contributes to their development. A turning point for them will be the transition of Turkey from a parliamentary system of government to presidential, as this will help to provide greater support for the Syrian revolution and to end the injustice against the Syrians and other people of the region.

He also expressed his confidence that the war in Syria will continue as long as the regime of Bashar al-Assad will not be overthrown, along with all its structures and the Syrian people will not be able to determine their own future, which is consistent with its principles. In such circumstances, the world would witness the emergence of a United Syria in which there is no place for force and coercion. Overthrowing the regime, it is impossible to stabilize the situation neither in the country nor in the region, as the Syrian regime and its backers are the biggest sponsors and exporters of terrorism in the world, whether directly or indirectly.

He stressed that “Ahrar al-sham” is on the side of the forces of the revolution in Syria and in defense of its principles and will not leave without attention to any one intervention from abroad, thereby expressing its refusal to accept the solution that would take into account the interests of both sides and equate the murderers and killed them. According to Abu Ammar, a movement will contribute to any unification of the revolutionary forces that would reduce the level of conflict in the country. He hoped that the “Tahrir al-sham” will make a step in this direction, despite their statements that she does not agree with the terms of such settlement.

In his opinion, the number of those who left the ranks of the movement and joined the group “Tahrir al-sham” does not exceed 4% of the number of fighters first, while some of the media inflate this figure, resulting in data that is absolutely untrue.

About “Ahrar al-sham,” Abu Ammar said that the organization, with the blessings of Allah were able to achieve significant success and to play a special role in the Syrian revolutionary movement, which makes it one of the few groups that managed to maintain its presence in Syria and fighting ability over a long period — six years.

In addition to deployment positions on all the liberated territories, active participation in all the clashes with the regime, as well as doubling the number of fighters, including in its ranks, the movement is replete with good experts from among the Syrians. So, among leaders of the movement many have international diplomas in engineering, medicine, administration, law and other disciplines. Perhaps the abundance of such personnel has become one of the most important reasons for the survival of the movement until today, despite the simultaneous death of all first-level managers in the heinous bombing three years ago.

At the administrative level, the movement is characterized by centralized decision making, high degree of rotation of power through periodic elections chief. Also actively used the principle of Shura (consultation). 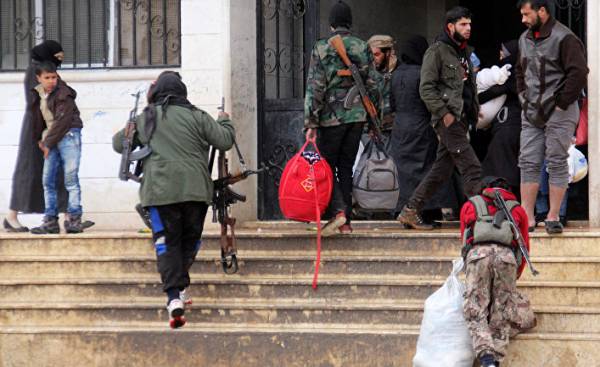 © AFP 2017, Omar Haj KadouБоевики during the move from the suburbs of Damascus, Khan al-Sheikh in Idlib province

Thus, according to him, the movement is not confined to military action in order to ensure the victory of the revolution, but also taking steps in the areas of policy, responsible for administrative management in the liberated territories, despite limited opportunities. In addition, it conducts advocacy work, as it believes that it is necessary to use all not against the law methods in order to support the oppressed, to uphold their rights and pursue a fair deal.

In conclusion, Abu Ammar said that the movement has put forward the project of moderate Islam, far from extremism and any pseudo, which is one of the most important pillars of revolutionary work. You need to take into account that some errors that are allowed from time to time, always considered that reflects a common desire to develop and overcome them. 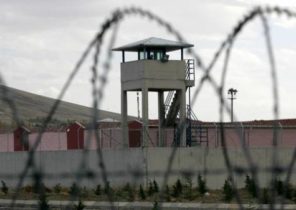