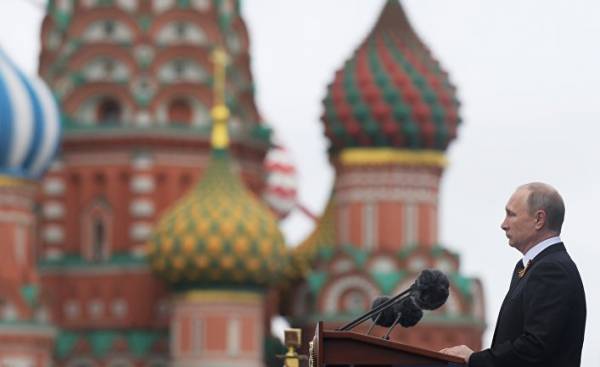 Donald trump is trying hard to strengthen suspicions about the opacity of relations with Russia. The dismissal of James Komi (James Comey), almost secret meeting with Sergey Lavrov in the White house, revelations about the communication allegedly compromising of American intelligence poison the atmosphere in Washington. The new President may get involved in foreign policy crisis before started actually the policy itself. The turmoil in the United States is opposed to the clarity of objectives and intentions of the Kremlin: they are not necessarily hostile against Washington, but pragmatically focused around their own interests.

With trump (which would be better) or without Vladimir Putin is a comprehensive international policy. As for the West, the victory of Macron took the sword of Damocles from the EU, and is scheduled for may meeting (trump should arrive on may 25 in Brussels for a mini-summit of NATO; may 26-27 summit of the group of seven in Taormina) will have to restart transatlantic relations with the new American administration. Russia is the most prominent missing link in the summits, but it will still be at the center of discussion: Moscow — a synonym of security in Europe and, increasingly, in the Mediterranean, she took the main role in Syria, and now eyeing Libya.

Being in a cool relationship with Saudi Arabia, Russia found with it mutual understanding in the issue of reducing oil production to maintain its value.

What thinks and what Moscow wants? As far as trump is unpredictable in their reactions, so impervious to the idea of Putin. Regarding the latter, numerous (consisting of seven people), Russian only “non-governmental” delegation held 16 may in the Latvian capital of Riga “dialogue” about some of the positive symptoms. Russia is experiencing a deep distrust of the West, and NATO in particular; voltage became the “new normal” (with its risks may have been underestimated); Russia sees no real threat from the allied patrol in the Baltic countries and Poland, and missile defense system; in Ukraine, Russia continues to participate in (other) frozen conflict, resolution of which is not yet in sight, while the Minsk — 2 agreement are not met, but there is no “escalation”; Russia no longer expects that the EU will remove sanctions; she would like to reduce the enormous capital which has been invested in Syria to turn it into a “life annuity”.

The election is Moscow in terms of the interlocutors? Dialogue is fine, but you have to have a very clear idea of who and what you are. “Instinctively” the Russians are committed to bilateral dialogue with the United States, whoever is their President. Donald trump they still see a chance, which they claim they were deprived of the Obama administration; if necessary, they will manage without him. Russia is developing priority relations with Beijing, as shown by the presence of Putin at the opening of the silk road. The most promising direction for pragmatic Russian-American cooperation include the regional crises, particularly Syria and the middle East, but also North Korea, whose destabilizing potential of Moscow does not leave indifferent.

The interest in other channels of dialogue is expressed sparingly. On the lowest rung of interest to NATO. Russians believe that the Alliance wants to resume their relationship (NATO expresses a contrary opinion). The only exception to this are the issues of disarmament and arms control that should be addressed not only with Washington, but in multilateral formats, that is, without the participation of NATO is not enough. For Moscow, the United States has ceased to be the only possible source also in the middle East, especially in post-conflict Syria, when America wants it to come loose. Hence the diplomatic activity of Russia against other regional countries: Turkey, Iran, Egypt, Gulf countries. It is necessary not only in order to supplant Washington, but in order to ensure that the dividends of a serious military investment. Putin does not trust one only of gratitude on the part of Bashar al-Assad.

Finally, the European Union. After the elections in Austria, the Netherlands and mainly in France, Moscow in some measure, the revised European attitude to the wave of populism. Despite all the shortcomings, the EU will continue to exist. In Syria, the EU is not because of the political and military weakness, but it will play a role in her recovery (which Russia continues to see Brussels as official of the payer, not the negotiator).

The EU today remains unresolved one important card of all: Iran. The prospect of an American-Iranian relations is very concerned about Russia. “Europeans and Russians are United by the interest that is associated with the prevention of a collision between Washington and Tehran — said in Riga, the President of Fund “New Eurasia” Andrey Kortunov. — If Donald trump will continue to look at Iran through the prism of the relationship, Netanyahu, the middle East, it could reach explosive conflict between Sunnis and Shiites”. Nuclear agreement with Iran was a success for European diplomacy and personally Federica Mogherini (Federica Mogherini): it can be the basis for resumption of relations between the EU and Russia.

On hovering over new York shadow should definitely be a European capital. “We need a European leader who will have the determination to resume weakening” of 17 may that said, not Russian, not American and not European, and former Deputy Minister of defense of Ukraine Alexander Chaly.