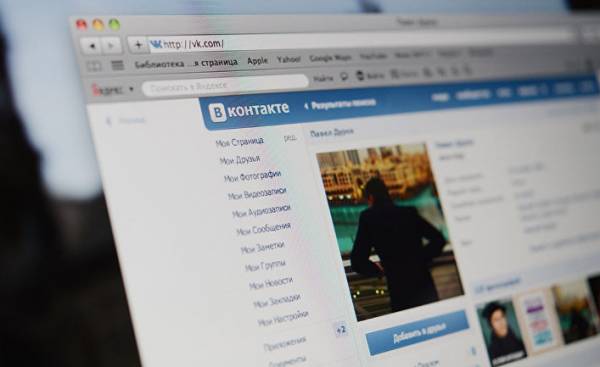 The decree of the President of Ukraine on introduction of new sanctions against Russia came into force on 17 may. The ban includes a number of Russian websites, including popular social networks Vkontakte and Classmates.

Providers are confused because the lock will take about two years and a billion dollars, and the penalties for failure to comply with the decree was already announced.

In the European Union not to make statements until I get “more information” from the Ukrainian side, because such bans uncharacteristic of democracy and closer to totalitarian regimes.

Meanwhile, NATO was sympathetic to the decision of the Ukrainian authorities.

Those affected by sanctions

In the new sanctions list includes 468 Russian and Ukrainian companies. Sanctions against 1228 individuals.

With more than half of the companies and individuals had already been included in the sanctions lists of decrees, signed by Poroshenko in 2015-2016.

The new decree introduced sanctions against Russian companies 271 and 682 people.

The basic format of the sanctions imposed — the restriction of entry to Ukraine, a ban on maintenance of economic activities and property management on the Ukrainian territory.

In this list there are dozens of Russian banks, private airlines, media houses, state-owned factories and non-profit community organizations, and organizations associated with LDNR, journalists, deputies, military and judges.

In particular, the decree Poroshenko involves locking on the territory of Ukraine of services of the holding Mail.Ru Group and Yandex, from news-gathering to the service of transfers and taxi.

However, the greatest outcry in the community was caused by that part of the decree, which prohibits Russian social networks Vkontakte and Odnoklassniki, and 1C.

And the Russian service of accounting software 1C, according to various estimates, are from 70 to 80 percent of Ukrainian businesses. However, as stated later, the SBU, the prohibition of 1S the traders is not concerned.

The decision of the Ukrainian authorities affected and other Russian Internet companies and software producers — the publisher of the electronic dictionaries ABBYY, anti-virus companies Kaspersky Lab and DrWeb.

The reasons for the ban of social networks

Question about blocking Russian social networks have raised ukraisnkih authorities. So, at the beginning of this year, the adviser to the interior Minister Zorian Shkiryak said that the Classmates and Vkontakte “fully controlled and guided by the Russian special services”.

President Petro Poroshenko lock on the Russian social networking explained on the pages of Vkontakte and Classmates, urging Ukrainians to follow his example — to abandon the use of these resources “security reasons”.

The day before the signing of the decree Poroshenko on air of transfer of Freedom of speech said that Russia could use against Ukraine kibervoyska.

“We have seen cyber war, when the Russian kibervoyska tried to influence the outcome of elections throughout Europe, in the United States of America. We expect that they will try to make in Ukraine”, — said the President.

Experts in digital technologies explained that this decision is connected with desire to pull the huge flow of personal information, which is charged users of the services.

However, the international Human rights organization Human Rights Watch and reporters without borders condemn the ban on Russian sites.

The European Union and other international partners of Ukraine should immediately call to cancel the decree, urges HRW.

Reporters without borders said the ban on Russian social networks in Ukraine is an attack on freedom of expression and information. The organization urged the Ukrainian authorities to oppose the promotion of quality journalism, rather than ban information.

Despite the fact that the presidential decree took effect, immediately turn off the Internet resources of local providers can’t.

About the beginning of the lock also said Kyivstar, Lanet, welfare, LifeCell. To restrict access ready Triolan and Will.

However, the Chairman of the Internet Association of Ukraine Alexander Fedenko said that completely block access to Russian websites and services, placed under sanctions, if the current device information of infrastructure of Ukraine is technically impossible.

“As of today, it is impossible to perform. For global locks on the territory of Ukraine requires investment in the area of millions of dollars and change the network infrastructure,” he said.

Fedienko, said that the implementation of the decree Poroshenko will need “a year or two and more and somewhere within the state one billion dollars.”

Former CEO of Yandex.Ukraine Sergey Petrenko also said that in Ukraine there is no infrastructure to block Internet traffic.

“There is no opportunity at one point to make binding for all providers the decision and test its performance, the only way to ensure its performance remains feet to get around ISPs and demand. Providers many in Ukraine”, — he wrote in his blog.

It is also worth noting that blocking of sites is not provided by Ukrainian laws without a court order. This was stated by the representative of the Verkhovna Rada Commissioner for human rights Mikhail Chaplya.

“That is if there is a solution, then the access can be restricted. Another procedure does not exist,” he said Aniano.

The reaction of the blocked resources

Russian resources that fall under the new Ukrainian sanctions, saying that the restrictions do not pavlyut on their profits and will inflict damage only to residents of Ukraine.

“This decision will also affect, above all, by the users — citizens of Ukraine. About 25 million people in the Ukraine speak of locked platforms with their friends in Ukraine and all over the world; now they will be deprived of these relations”, — said in a statement Mail.ru Group (which includes Vkontakte, and Odnoklassniki).

The company noted that it has never violated Ukrainian laws and is out of policy.

And Mail.ru and in Yandex stressed that the sanctions will have no impact on the companies ‘ business as a whole and will suffer from this decision, ordinary users.

“It is sanctions against 11 million Ukrainian users monthly who choose our services, and against thousands of Ukrainian organizations that use our technologies and services to develop their businesses,” said Yandex.

Shortly after the signing of the decree Poroshenko Mail.ru Vkontakte Group and told their users how to bypass the lock on its resources.

Russia condemned by his own methods

The Ministry of foreign Affairs of Russia called new sanctions “a manifestation of censorship for political reasons”.

In addition, on the Agency’s website States that the blocking of sites indicate that “Ukraine is moving rapidly to build an authoritarian state.”

According to the Russian foreign Ministry, Kiev “disregard” any international standards of law and morality, its obligations in the sphere of protection of the rights and freedoms of the individual.

“Fearing the slightest sign of dissent in the country, the Kiev regime is moving by leaps and bounds to build an authoritarian state where freedom of speech and unfettered access to information subject to severe restrictions,” — said the Russian Ministry.

On the state channel Russia 24, which for three years prohibited in Ukraine, on may 16 evening news broadcast showed a manual bypass block sites with the help of anonymizers.

It looks very strange, because Roskomnadzor regularly through the trial blocks.

While in Russia, 93 per cent of all blocked sites, and that about 70 thousand pages, was banned for no reason, simply at the same time with prohibited materials.

It is also interesting that the adviser of the President of Russia on development of the Internet Herman Klimenko, commenting on the decree Poroshenko, called such measures ineffective.

He suggested that the blocking of the biggest social networks will lead to the fact that citizens of Ukraine will quickly learn methods to bypass restrictions, using various VPN services and anonymous browser Tor.

Blocked resources are in the top 10 most popular sites in Ukraine. Audience Vkontakte — 78.3 percent Mail.Ru and Yandex — 62.3 percent, Classmates — 46.9 percent.

However, as mentioned earlier, the infrastructure of Ukrainian networks does not allow to block the sites completely. To circumvent the ban in a few clicks.

Thus, as stated by the head of the information security apparatus of the national security Council and defense of Ukraine Valentyn Petrov, users and providers will not be punished for using the manual bypass is sanctioned Russian sites.

The national security Council hoped to reduce the number of Ukrainian users of restricted resources of the Russian Federation at least in half.

However, it is unknown how the lockout will react the Yandex. In the sanctions list of Ukraine they got about 50.

For example Yandex.Card, according to one, will not be updated, others are no longer open.

In the application, Yandex.Weather is only limited information about Moscow and Kiev.

Корреспондент.net made up detailed instructions on how to bypass the lock Vkontakte, Classmates, and other prohibited services.