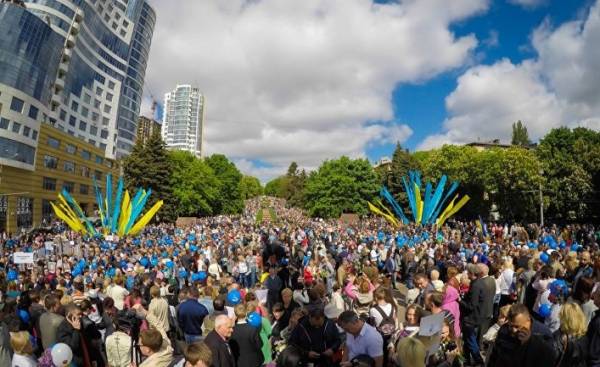 Somehow after experiencing “Victory Day” with all its immortal grandfathers and Russian-speaking regiments, Ukraine has engaged in debriefing. Dear experts on different influential and not very media sites began to gather a thought to think: “Scho vono take to do z Tim nepodobstvo, gentlemen, dwellers Nikoli znovu? Ha?”. Proposals were put forward very different: from spit and forget it as a nightmare to plant all to hell and the day of a national Sabbath to do a normal day’s work. Particular outrage the conscious part of the Ukrainians was the fact that “in the fourth year of the war”… Well, you understand. And then in slim media squabbling crashed the voice of the “pragmatists”, who began to convince the interlocutors that this whole de-communization is the essence of a flawed and obsolete system. “Give people jobs and pensions. Bringing you all the streets renamed? You’ve got nothing to do?”. And here I really want to exclaim: “In the fourth year of the war started up again the hurdy-gurdy of the old-fashioned national values?”. How after everything that happened to us during these years of war, after what happened on 9 may, after grief, death, loss to believe that Russian propaganda will resolve itself? How can we seriously urge to pigeonhole the historical truth and engage in sausage? Till!

It is actually much more cynical than it might seem at first glance. Identity is the basis for the functioning of the Mature personality. An adult can always answer the question of who he is. “I’m a mother” “I am engineer” “I am a Ukrainian nationalist.” Depending on that person responds to the question: “Who are you?” — to analyze his psychological characteristics. “I” as a concept itself is the result of personal experience, education and significant beliefs. “Self-concept” is a system of beliefs about himself, conscious and reflexive part of his personality. This is where understanding your kind of tribe — that is, belonging to the land, traditions, culture, is almost decisive. From which group, history, considers himself a man depends on how he will do in any given situation. Recall Maidan. How many people could not come to the area only because they publicly called themselves opponents of the regime? How many went to the front in the early days, because “I am Ukrainian” “I am Cossack family”, “I am a patriot”, “I am the defender”, “I’m a warrior”? The conscious part of the personality that the self-concept dictates the norm. Because if a person will walk contrary to his understanding, he will collapse, lose integrity, become weak and vulnerable to manipulation.

“Russian world” — an ideology of conquest. It is a faith that requires sacrifice from “istenosanai”. But the goal, the enemy, those against whom they are going immortal columns, are people with Ukrainian national identity. Marches need to show massive support “other ideas” and to slow down the rapid acquisition of Ukraine’s national identity. So, during the Orange revolution of 2004 it was invented by a division into two Ukraine. Every time there was a need to strengthen national space immediately sounded the argument: “There is another part of society that would disagree. Let’s leave everything as it is”.

Something similar is happening now. We show a huge number of supporters “Russian world”, whose opinion we are asked to reckon with. The group, which is directed against the Russian ideology are ukrainotsentrichnaya Ukrainians. Im trying to create an alternative. That is why, “very useful”, in the Ukrainian information space is thrown a “modern sound”: “And let’s forget about the famine, the occupation, death, ethnic and cultural genocide, millions of deaths, hundreds of thousands rising each time in a desperate struggle for Ukraine. Why do we know who we are and what kind”.

Those who are marching in the streets of Ukraine with the red flags, understand who they are. These people have a clear belonging to a single Soviet “Russian” people. All their slogans: “grandfathers fought”, “we’re just going to pay tribute to” all is for the gullible idiots. In fact, those who called veterans of the ATO “fascists” and rushed to tear the Ukrainian flag, have a clear identity with a country that is waging war against Ukraine. To forget history is offered to those who themselves are not yet aware of the part of the Ukrainian people. Or was aware but did not fully understand what traditions, values and principles correspond with the Ukrainians. They proposed to feed the cheap Soviet sausage, to speak tales about “two stories — one people” and prismati assurances: “If you don’t try to feel themselves to be Ukrainians, we’re not going to play along with the country-aggressor”. Metaphorically speaking, the collective Ukrainian, so as not to offend fans of “Russian world”, offered in response to the question: “Who are you?”- answer: “I am for peace,” “I don’t mean to offend”, “I actually live here, but I can move”.