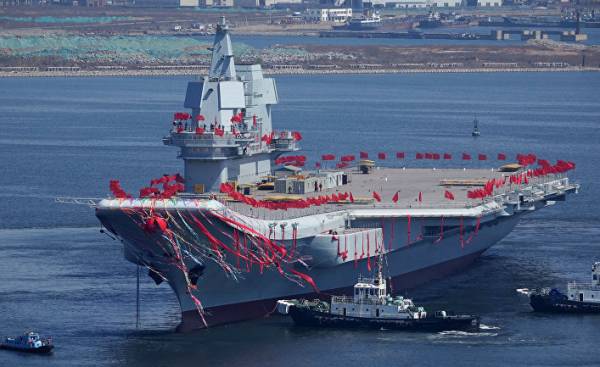 25 APR 2017 China launched its second aircraft carrier, which was the first built directly in China. Already being built the next ship, and, increasingly, there is information about that in the next 10 years, China wants to supply arms and even nuclear aircraft carriers. However, Russia does not want to lose face by 2030 is going to build a brand new ship of this category, which in the future will add to or replace aging, “Admiral Kuznetsov”.

Recall that the Russian and the Chinese program to build aircraft carriers related. “Admiral Kuznetsov” (this is the fourth name of the ship that first bore the name of “Riga, then Leonid Brezhnev, then Tbilisi”) entered active service in 1990. In that time I built and akin to the cruiser “Varyag”, but the collapse of the Soviet Union led to the halt of construction when the ship was ready two-thirds. After the “Vikings” a few years rusting in a Ukrainian port. After it was bought by a dubious Chinese company, and the carrier was towed to China, there to make it a floating hotel and casino.

Thus, China got a few decommissioned aircraft carriers from different countries, two of which have really undergone the intended changes. But in the case of “Varyag” everything turned out differently. It soon became clear that the firm – the buyer was a “straw man” of the Chinese armed forces, and photographs of the place of work talked about the fact that the vessel is prepared to perform its original functions. The “legend” about the hotel then no one believed, and in 2011, the Chinese Navy admitted that the carrier will be repaired and put into operation, becoming the first ship of this class under the Chinese flag.

Shortly after the aircraft carrier was sent to the first running test, and in 2012 he was officially accepted into service under the name “Liaoning”. The main type of its carrier-based aircraft is a fighter J-15 is essentially a copy of the Soviet su-33, the prototype and the documentation of which Beijing managed to get Ukraine along with the “Varyag” that the Russians, of course, is not pleased. But this was not the first and not the last time that China with their actions have caused displeasure in Moscow.

In 2013, China started building its own aircraft carrier, but as you progress professionals and Amateurs could not (depending on nationality) to hide malice or frustration. After all, the new Chinese aircraft carrier, at least externally, is a clear copy of the Soviet counterpart. We can assume that inside there are significant differences, but apparently this ship is different from the “Admiral Kuznetsov” and “Liaoning” in General, only a set of radars to the command island.

The Chinese Navy gives ships names just before putting into service, and in the case of a new aircraft carrier it has to happen, apparently, in the next or 2019. So while the ship is designated as Type 001A (“Liaoning” is the Type 001, that is, even the Chinese themselves do not conceal the origin of the design), but presumably will be called “Shandong”. However, as reported by the Asian news, the celestial Empire while only gaining strength and is going to significantly expand our fleet, in the long run to place six or seven carriers of different concepts.

Now at the shipyard in Shanghai to build ships under the project name Type 002, with a different design, similar to the us courts. Perhaps in the future there will be other ships of this design, and by the end of the next decade, the fleet under the red flag will get nuclear aircraft carrier Type 003 with a displacement of 100 thousand tons. Both new types will be equipped with catapults, but this is a fundamental difference from the Soviet design for take-off of aircraft is used the starting ramp.

It is a more simple technical solution, which, however, imposes serious restrictions on takeoff weight of the aircraft, which in turn, makes the Russians some problems. Their carrier-based aircraft su-33 and MiG-29K can’t take off with full arms or are forced to climb with the minimum amount of fuel that refuel in the air immediately after takeoff. But this only creates additional difficulties. This concept is closely linked with what was the original purpose of the Soviet aircraft carriers.

Russian officially called their aircraft carriers “aircraft carrier”. Sometimes talking about the fact that this is just a play on words, emphasizing the contrast to American carriers, because they were “a tool of aggression of the imperialists”. Of course, this also played a role, but the fact that Soviet ships differed in concept. If only because the “Admiral Kuznetsov” has a fairly large range of weapons against air, surface and underwater targets, while the us and other Western carriers only lightly armed.

Thus, the Western ships are created solely as a carrier aircraft for “force projection”, that is, as a tool of global politics, to the “aggression of imperialism”, if you want. On the contrary, the Soviet Union, which were purely continental power, and he gave the fleet clearly less attention has created their own carriers as a means to protect the coast and naval battles. So the planes on Soviet aircraft-carrying cruisers were supposed to be mainly anti-aircraft missiles, and heavy warheads for defeat of the land purposes, and that is why the Soviet cruisers were not and catapults, after all, enough of the launch ramp.

However, it soon became obvious the limitations of this concept, and during a recent use of the “Admiral Kuznetsov” off the coast of Syria, these limitations become even more obvious. Undoubtedly, the Russians have been extremely important to involve an aircraft carrier, to acquire the experience, however, confirmed that the take-off without catapults does not allow to use capacity of aircraft to the full, and when hitting ground targets it creates great difficulties. Russian aircraft carrier returned home and is now in the dock, where it waits for the complex repair and reconstruction.

Catapults not equipped, however, it is exactly what his sensors and weapons will be upgrades. Will be dismantled huge battery of anti-ship missiles “Granit”, the functionality and applicability of which there is reason to doubt, and the vacant space or filled with a battery of new missiles “Caliber” and “Onyx”, capable of hitting surface and land targets, or extend through it aircraft hangars. Updated “Admiral Kuznetsov” will return to the sea in approximately two to three years.

But really this is only a temporary solution, since Russia is also planning to build new nuclear aircraft carriers with catapults (“Admiral Kuznetsov” is equipped with traditional engines). By the way, in the Soviet Union and managed to design a nuclear aircraft carrier “Ulyanovsk”, combining the start-up springboard and catapults, but the collapse of the red Empire buried this project. Not so long ago Moscow presented a model of a prospective aircraft carrier Project 23000 E “Storm”, which is similar to the revived “Ulyanovsk” and at the end of the next decade to occupy a Central place in the Russian surface fleet.

The start of construction, according to the Russian military program scheduled for 2019 — 2025, and has even started to choose the name: a favorite is “Marshal Zhukov”. Some experts, including Russian, are these plans with skepticism, and warn that building such a large ship that Russia has no shipyards, no people, no technology, not to mention financial resources. Sound even of the opinion that the project “Storm” is a propaganda bubble.

Symbolic or propaganda value of aircraft carriers, of course, should not be underestimated, and Chinese efforts apparently aimed, in particular, to confirm its status as a world power. By the way, that the symbolic value of carriers plays an important role, and prove arguments and vote on the names of the new Chinese aircraft carriers, because in the first place a consistently kept the name “Taiwan”. Of course, the question is, will China stop your choice at such a “provocative” title, but this discussion confirms that the Chinese are well aware of what potential we have aircraft carriers.

It should be emphasized that the combat capabilities of the “Liaoning” is limited. PRC said that the aircraft carrier will be used mainly for training and experience. This is very important the point of view of the Chinese than with the Russians remain “profane” — to compare them with the Americans, of course, is not even necessary. It is interesting that the organization, working procedures, and a uniform deck of the Chinese staff are almost exactly copied from the us.

It seems that China has learned from Russia everything that could, and now turns to another pattern, as in carrier-based aviation operations, the U.S. Navy is the undisputed leader. The fact that the Chinese student is already beginning to surpass his Russian teacher, prove it, finally, Chinese plans to build new aircraft carriers, which contrast sharply with the vague prospects of the Russian project “Storm”. So, at the end of the next decade, China may have four or five aircraft carriers, whereas in the case of Russia even the most ardent optimists assume only two aircraft carrier.

The desire to follow the example of the United States says that the Chinese Navy wants to grow to the level of the opponent, the U.S. Navy, but Soviet or Russian Navy could never match the us even close. But that’s why China should refer to the experience of Russia (or USSR) and to perceive it as a serious historical warning. Don’t expect that America will look at the growth of the Chinese flotilla idly by. By the way, the often-mentioned “Pacific pivot” U.S. — only attempt to stop the rise of China.

Thus, though China is building in the area of aircraft carriers large plans (unlike Russia), and has basically everything necessary for their implementation, there is a real risk that China will provoke a race for naval armaments. In it, he will obviously lose to the United States. Therefore, China should draw on the experience of the ‘ 80s, when the race unfolded and strategic defensive weapons, which the Soviet Union was exhausted and collapsed.

Although the Soviet Union, in General, would collapse anyway, because it’s inefficient economy simply could not exist, “the race” with the United States Reagan is much closer to the denouement. The Chinese economy is also beginning to slip, and the question arises, has not reached this (much-touted) “Chinese model” of their territory, and will not suffer if its soon inevitable collapse. China should remember that its aircraft carrier “Liaoning”, then still under the name of “Varyag” was officially launched in 1988, shortly before the beginning of the end of the Soviet Empire.