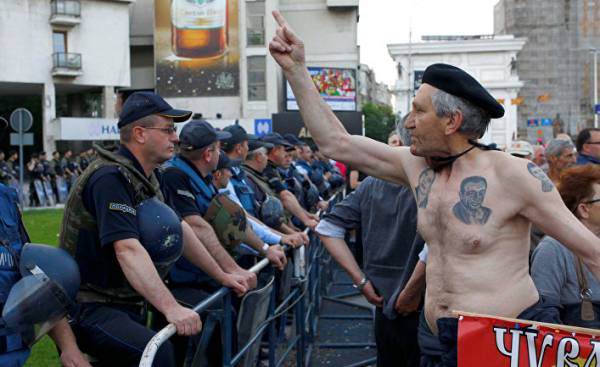 If you are in Bosnia and Herzegovina, Serbia or Macedonia and use the word “region”, it is assumed that you mean the Western Balkans. By this phrase, which has become a modern neologism, refers to the Balkan countries, which are not included in the European Union and, probably, never it will not come. The phrase Western Balkans are fully pushed past the name, South-East Europe. It has spread to several countries became EU members, as well as Bosnia and Herzegovina, Serbia, Macedonia, Montenegro, Albania, “paralyzed” Kosovo in the Western Balkans. Now known as the territory that the EU is going to use solely as a vestibule for the distribution of goods, are exempt from all taxes, and as a zone in which, using false promises of Euro-Atlantic integration of the EU will prevent the spread of Russian, first of all, as well as Chinese influence. In fact, the Western Balkans proposes the integration into NATO. Especially put pressure on countries where live Serbs, because the idea of the Alliance “Russian Junior” will do anything to tear away from the people that they love so much. It is, of course, about the Russians, or rather Russia is the main enemy of NATO.

If we talk about Macedonia, which since its founding tended to be integration with the EU and NATO, the Alliance was in no hurry to take under his wing. However, a NATO military presence, that is, the Americans in Macedonia began in 1992. In 1994 at the airport in Petrovac, near Skopje, was established a military base. To embed American soldiers were given to former military polygon Krivolak, where training exercises of the forces of NATO and the countries participating in the program “Partnership for peace”. In Kumanovo was built intelligence base and logistics center KFOR — they ceased to exist in the spring of 2001, following the intensification of the conflict with the Albanians. Overview of the situation in the region we will start with the story about Macedonia, where the picture is not rosy.

Turkey does not create the Great Albania, but…

Political tensions, which in the case of Macedonia easily turns into ethnic, may result in armed conflict between Macedonians and Albanians. Such a development would suit many. Of course, supporters of the “Albania in its natural borders,” and those who do not want to have pipelines for Russian energy “flows” was laid on the territory of Macedonia and then through Serbia to the European Union. Similarly, not all positive about Chinese commodity flow according to the “New silk road” and its Balkan section. Someone sees the new conflict in Macedonia an excellent opportunity to prevent the spread of Russian and Chinese economic and with it political influence. By the way, the idea of greater Albania exists from the time of Austria-Hungary, being a reliable barrier to Russian influence in Orthodox countries. Therefore, the main allies EDI Rama — West.

Recently, Prime Minister of Serbia openly with the thesis that the project of expansion of borders of Albania at the expense of all territories where Albanians predominate, is a certain intelligence Agency, and stated that we are not talking about one of the major powers. The Serbian media, especially those who are close to power, it gave reason to call Turkey the main instigator, and creates the impression that it actually is. Recognize that to assert that the Turkish secret services operate in Macedonia, in Kosovo or in Bosnia is to convince someone in the sea is fish. Of course, the Turkish security services have long been present in the Balkans. But whether Turkey is a Great Albania?

Turkey has faced many problems, and it is especially concerned with relations with the US, which diverges in the approach to the problem of Syria and the Kurds. Recently during a visit to Turkey Rex Tillerson kept quite cold. Yesterday Turkey announced that the operation “Shield of the Euphrates” has been completed. However, the agreement between Turkey and the United States has not been reached. The result of many hours of negotiations is unknown, but in the face of Erdogan, it was clear that he was disappointed over the support the U.S. provides to the Kurds, more precisely, Rojava. Erdogan knows that the US is working on the issue of creation of a Kurdish state. What is the calculation Erdogan? If the US is not going to prevent the encroachments of Turkey on Syria and would give her not only the North, but another part of Syria where the state of the Kurds, then Turkey might support the United States in future operations, completely detached from Moscow.

What do the Germans

In addition to strategic problems with the United States, Turkey has faced difficulties in the relations with the European Union. On the other hand, after the disturbances in the relations with Moscow in connection with the downed su-24, Erdogan realized that can survive without energy with a troubled economy, will be forced to leave Syria and to condemn Turkey for an uncertain future. Moscow has warned Erdogan that if he is to threaten the Serbs in the Balkans or close the Bosphorus for Russian ships, possible restoration of the Byzantine Empire. In such circumstances, Erdogan, of course, don’t even think to paste the Russian spoke in the wheel in the Balkans. In the middle East, Russia yet does not cross the red line, but in the Balkans can do it. Russia is now present in the Balkans in the economic and in the humanitarian sphere; it popularitywith their culture, including the culture of diplomacy, that is, implementing soft power. So hysterical headlines and warnings from the lips of some of the Balkan politicians that Russia in the Balkans went on the offensive, and that it is dangerous for the West is unfounded.

Why, speaking about the support the idea of great Albania, indicate that Turkey, rather than Germany, which has brought relations with Turkey on there, limiting the usual diplomatic activities? By the way, who has influence on the Macedonian President Ivanov that he was handed the mandate of Prime Minister Zoran Zaev? The representatives of Turkey or the EU, USA and NATO? If in Macedonia the war starts, Turkey will lose the ability to blackmail the EU by threatening a new migration wave. Turkey irretrievably moved away from the EU, economic cooperation with the EU in decline, joint work in security and exchange of information between Turkey and the EU is very limited, and their relationship is mistrust. So, France and Belgium did not take seriously Turkey’s warnings of impending terrorist attacks, although their security services were transferred and the names and photos of terrorists. In General, Turkey is concerned about a lot of internal political problems, the poor economic situation and the situation in the middle East. Erdogan will not get anything from a new Balkan war, which could lead the efforts of a Frame attached to the creation and proclamation of a greater Albania.

Several events extremely aggravated the situation in the region. One of them, of course, was the decision of the judicial authorities in France to deny Serbia to the extradition of Ramush Haradinaj. A ban on travel from Colmar imposed until, until the court decides on the status of Haradinaj, he violated every day, leaving the city in the car, going on NATO and the French military base for a briefing. It is clear that Haradinaj has an important role in future events. In Kosovo, he has the military infrastructure that monitors terrorist organizations and channels of deliveries of drugs from Afghanistan. At Haradinaj has its own logistics network, supply of explosives, weapons and fake documents necessary to terrorist organizations. He is a brutal killer, ready for anything.

Why put pressure on Serbia

It is worth Recalling that people Haradinaj, including his personal bodyguard, was sent to Kumanovo, and with them there took his own Macedonian security service. Against Macedonia if there’s a shadow hanging clashes in Kumanovo in may 2015. It is known that Haradinaj will take part in the Albanian response to the capture of the Macedonian Parliament Gruevski supporters, and clashes in Macedonia could spill over into the North of Kosovo and southern Serbia. Of course, further development of the situation depends on the readiness and commitment which will show Serbia is the face of risks and threats coming from the South.

How Serbia will react to the possible spread of fire the war from Macedonia Serbian territory, depends on its political stability is inextricably linked with its security. In this context, it is necessary to assess and long-lasting protests of the forces defeated in the recent presidential elections. Soros has harnessed its infrastructure in order to destabilize Serbia and undermine Vucic, making, thus, their business. The demonstrators got the job: at the moment when, in their opinion, the force will be sufficient to break into the building of the national Assembly and proclaim the new government. Soros wants more in life to see the end of Orthodoxy in the Balkans, which will mark the political ruin of Serbia and Republika Srpska. With the help of controlled chaos, putting the protesters on the brink of collision with the police, Soros wants to deny Serbia the opportunity to help the Republic of Srpska.

Non-governmental organizations and various funds emphasizes the role of unemployment and social crisis in Serbia and via social media trying to motivate the youth by the example of events in Belgrade. The goal is to “Wake up” young people, rather to provoke them to rioting in Banja Luka and at violent change of government. It is thrown Soros.

At the same time Bishop of Banja Luka Comerica creates for his sharp rhetoric, an atmosphere in which Croats are the victims, and opposes, as well as all of the Episcopal conference, the policy of the Croatian democratic Union of Bosnia and Herzegovina (HDZ BiH). The Catholic Church does not want the third, the Croatian component of Bosnia and Herzegovina, preferring the country, gathered from the regions. Komarica even mentions that the Croats had completely disappeared from the Central cantons. In fact, the Bishop leads the media preparations for the coup in the Republic of Srpska.

In parallel, actions are being taken that are designed to shift the attention of Russia to Ukraine, and soon even need a no-fly zone over Ukraine and the Kaliningrad region. Planned riots and terrorist acts in Russia, efforts are being made to divide Turkey and Russia, and that Russia had to disperse its military forces on the territory from Libya to Iran.