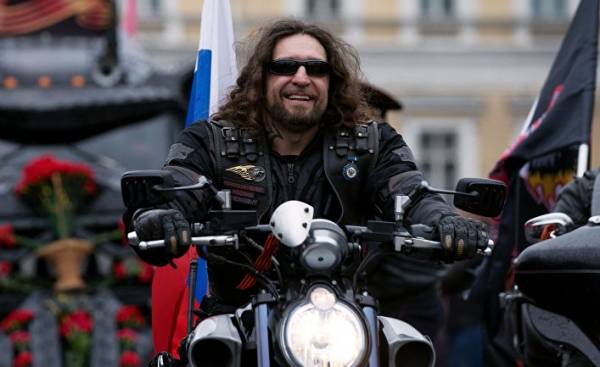 When squat biker in a leather vest appeared on the main Boulevard Donetsk, in the crowd, marching with a military parade in honor of the victory over Hitler, the uproar. “This Surgeon,” the people whispered and approached him to be photographed.

Alexander Zaldostanov (as the leader of “Night wolves” is the name on the passport) enjoyed its popularity. He willingly posed with grandmothers and children in the form of soldiers and not refused to the correspondent iDNES.cz in an interview.

“It was very nostalgic, sincere, emotionally and solemnly, he touted the Victory Day in the heart of Donetsk people’s Republic. — In the globalized world of the 21st century this was almost there, but we will fight for this. Here on the parade, I realized that my homeland has returned, and her bloody wounds heal. Returns the Russia that we lost in 90-e years,” Zaldostanov remembered the chaos after the collapse of the Soviet Union.

“Night wolves” — not the usual biker organization. Their directly funded by the Russian government, and the opposition says tens of millions of rubles a year. The roar of their Harleys biker brutality mixed with Russian nationalism, nostalgia for the days of the Soviet Union and the Orthodox Orthodoxy. Vladimir Putin himself from time to time sits on the bike and in front of the cameras is sent with the “wolves” in motopropulsor.

In Europe, the “Night wolves” has attracted the attention of forays to Berlin on the occasion of the may celebrations in honor of the end of the war. Last and this year, they visited Prague, where on Olshansky cemetery commemorated the Soviet soldiers. On Wenceslas square, they were expecting activists with flags of the European Union and Ukraine. The surgeon went on metamars in Berlin because of the involvement in the annexation of the Crimea is subject to European sanctions.

Zaldostanov believes that in recent years the European view of Russia has changed. “Today, we all pull at one rope. Europeans are beginning to understand what’s going on. The devil’s anti-Russian propaganda was exposed and the people is no longer valid”, — explained the 45-year-old native Ukrainian Kirovohrad, who, according to legend, turned to faith when on the highway it was stopped by an Orthodox priest and urged to change their sinful life and to save Holy Russia.

“We were witnesses of how the flag of the Donetsk and Luhansk regions and the Victory banner (the flag which the red army hoisted in 1945 over the Reichstag — approx. ed.) drove to the monument to the liberator soldier in Treptow Park in Berlin. These flags were carried by the Europeans. When the European Union declared the de-Christianization, all the bridges were burned and we have nothing left in common. The banner of Victory once again brought us together. And they scared of it, why get mad. They see that people support us,” said the Surgeon to the West, standing in the center of the rebel capital of Donbass.