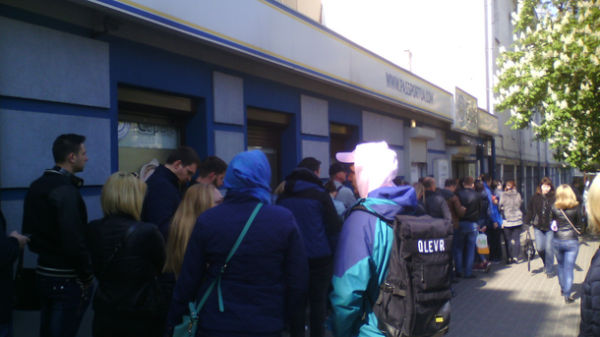 After last week, the Council of Europe to give Kiev final approval for the introduction of a visa-free regime, Ukrainians massively rushed to issue biometric passports. The hype is understandable, because the gate for free entry into evrostrany will open on June 11. “Today” figured out how much time it takes to design the coveted crust and subsides when the first rush at the passport services.

COUPONS. The first step towards a biometric passport — appointment time of filing. Initially, the journalist of “Today” wanted to “pass” through a system of electronic queue on the website of state migratory service, but the attempts failed because the program reported that there is no space available. Experienced users say that the best “window” in the online search at midnight, because at this time the system order is updated and online you can only book two weeks ahead. But an absolute guarantee is still there — too many now wishing. So we decided to go for the voucher and personally went to the passport service of SE “Document” in the Shevchenko district of the capital. However, arriving in the centre at half past nine in the morning, we found that these “hunters passports” enough. In the queue before us were at least 40 people, and the guards passed into the room of 10 people. Inside the staff checked the availability of the necessary documents for registration: passport — original of internal passport, identification code and current passports. After was issued a voucher number 235. Getting the card took no more than 15 minutes. It seemed, now it will go, but… “Come to take the documents in about three hours, — said the employee of the service issuing the certificate. Mad rush of people, and for submission works only the eight Windows, it is possible to serve 30-50 people per hour”. According to her, although the whole application process takes only 20 minutes, but due to a queue feeding you have to spend, in fact almost the whole day.

TURN. After lunch, had to wait for another couple of hours. Indoors much as we do, their turn expect a couple hundred people, a couple dozen adults were with children of preschool age. Well, that passport service enough. Another plus — equipped toilets and kiosks with drinks. But to stay long in the room still hard, as it was quite stuffy. But people are not discouraged: someone was watching movies on tablet, some on the phone telling someone that “turns the crazy all the meetings had to be cancelled”. But for the most part hunters passports discussed the upcoming bezviz. “Decided to do it now, and then you need to go to Italy in July, don’t want to run then at the visa application centres,” says neighbor at a time the man of business looks. The neighbor nods knowingly and says he has a biometric passport is, but came to draw for kids, to avoid hassle before you leave in August.

About two o’clock came finally and foremost a journalist, “Today”. At the window the employee was politely asked to produce documents to complete the application form and the statement to check whether the specified data. Then you have to pay for the service through the terminal. It was not difficult, as consultants, if necessary, help visitors. But it wasn’t the finale, because it was required to stand in a queue in another window, where employees take pictures of the person on the documents, fingerprinted, asked to do a digital signature. The procedure can take about five minutes, with the children longer, but the wait took almost two hours. To speed up the process, the staff in turn took away from the visitors in the packages of documents and gave them to the scan. In the end we have applying for getting biodegradabile took 6 hours and 40 minutes! We decided to issue a passport within seven working days of — fun at a cost of UAH 1210,32 (enterprise services — UAH 400, adminuilog, the form and its personification — 810 UAH). Unrushed, 20 days worth 957,32 UAH.

It is worth noting that all-day influx of wanting to formalize basagran did not abate. The staff politely advised and advised to take off from work and come in the morning, as the throughput of the offices on the street, 27 — to 450 people. Visitors have interpreted these guidelines in their own way, preparing to take a waiting list for a voucher at 6-7 am in order to accurately obtain the throughput. Hearing this, the staff reassured people in a month visa-free fever subsides.

Recall also that a passport can be issued in any district immigration office in your city. There 557,32 service costs UAH 20 days or 810,32 UAH for 7 days.

The bot will help with the place in the queue

In Ukraine there is a Telegram-bot iGov, which helps people to find the “window” in the electronic queue state migratory service. This program every three minutes checks the availability of the queues in the offices of GMR, working in Kiev, Dnipro, Odessa, Lviv, Kharkiv, Poltava, Ternopil, and Khmelnytskyi. Moreover, the robot can look in the window, focusing on the time and address. “There is a formal algorithm by which a new place in the queue appear in the 7:00 and 00:00, but sometimes months it can be released and at any other time,” — said the Creator of the bot from Kiev Anton Bible. 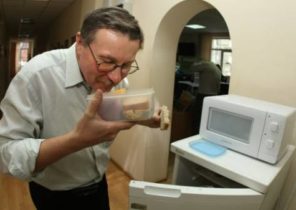