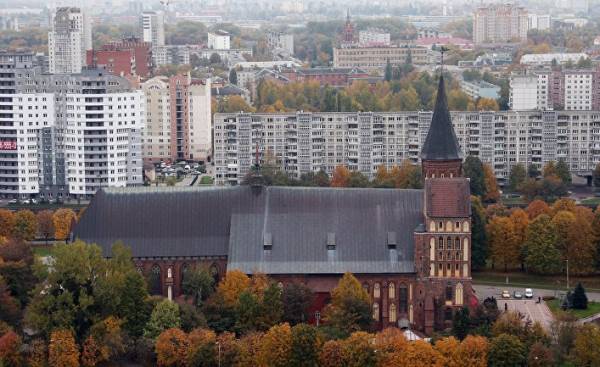 Are the residents of the Kaliningrad region “Russian Europeans”? This is a different Russia, more influenced by Polish cuisine, German roads and Spanish beaches than the Russian empty spaces, Russian food and a traditional off-road? After the collapse of the Soviet Union consciousness was formed almost million people living in the most Western part of Russia?

The Russian Kaliningrad region is usually featured in the media in the context of the tense relations between Russia and the European Union and NATO. It is presented as a “carrier” and “a huge military base of Russia”. It is very rare to hear something or to read about daily life in this region, about the problems they faced, and about the values and symbols that are important to ordinary Kaliningraders. In particular, in Poland and in Europe almost nothing is known about changes in self-perception of the inhabitants of this region.

In 2015-2017, there was conducted a research project that aims at least partially to close this information gap. The authors of the study concluded that the process of self-identification in the Kaliningrad region is affected by a number of factors. In the framework of the project an attempt was made to comprehensively examine all the complexities of this issue and among other things, to figure out how complicated and multi-faceted history of this region affects the modern life of Kaliningraders. Therefore, the researchers focused on two historical periods: the Soviet period (1945-1991) and in the times of East Prussia (from the middle ages to the end of the Second world war, with particular emphasis on the period 1870-1945 years) to Understand the pre-war past and its influence today would be impossible without taking into account such elements as the internal situation in Russia, the influence of the neighbourhood of the Kaliningrad region with the EU and NATO, the current international situation and the information space.

During the implementation of the project were done the following work:

• Among the residents of the Kaliningrad region and the Pomeranian and Warmia-Masurian voivodship (in Poland) has conducted more than 40 surveys. Among other things, the surveys were conducted by scholars, researchers, local government officials and NGO employees.

• There were two research trips to the Kaliningrad region (with a total duration of four weeks), and travel in elbląg, gdańsk and Olsztyn.

• Studied the content of Internet portals, which raises the issues of consciousness and identity, including the materials appearing in thematic groups in social networks.

• Has collected a large number of Polish, Russian, English and German literature of the past and present of the Kaliningrad region and on other issues studied in the project.

• The authors prepared the monograph of 300 pages, which will be the basis for a future doctoral thesis and for publication on the self-image of residents of the Kaliningrad region.

This study suggests that at least from 2000 years in the Kaliningrad region there are intensive debates about the past, present, and future. Such debates tend mainly to Kaliningrad, and a superior emphasis on appearance of public space and symbols of the city and region.

One of the main topics of discussion is the relationship between the Soviet and German (East Prussia) in the past region. The growing interest in the heritage of the pre-war period leads to the fact that the East Prussian Konigsberg is increasingly becoming a reference point for many urban projects. A similar phenomenon, although on a smaller scale, have been reported in other cities in the region. At the same time, there is a significant group of people who insist on the inculcation of Soviet and Russian culture and traditions. According to their view, excessive attention to foreign civilizational heritage can pose a serious threat to the Russian-ness of this region both at present and in the future.

There is another factor that enhances the importance of the debate. We are talking about the world Cup, which will be held in Russia, and Kaliningrad will be one of the vote.

The project participants concluded that the primary and main level of the self-image of residents of the Kaliningrad region is of a national character. People feel themselves Russians (Russian citizens) and maintain a tangible connection with the people in other parts of Russia. But this does not mean that they do not differ from each other. Regional differences can be significant, mainly for geographical and historical reasons. However, it cannot be assumed that regional level of identity is contrary to the national and state level, although it is becoming more important.

The study indicates that in the processes of self-perception taking place in the Kaliningrad region, the role played by the development of the Polish-Russian border cooperation. The opening of small border traffic between Poland and Russia in the middle of 2012 (in the middle of 2016, the Polish authorities have canceled it) greatly helped to overcome the problems rooted in the cold war period. It happened despite the tensions in international relations.

According to the participants of the research project, among Kaliningradians there is genuine and significant interest in the situation in Poland and the everyday life of poles. In this regard, it is important to continue to monitor the processes related to the self-perception of people on both sides of the border, as well as for cross-border cooperation and impact broader political and cultural context of the Kaliningrad oblast. Her social realities remain the big unknown for the neighboring regions of Poland and the EU.

Miłosz J. Zieliński, PhD student at the Institute of Slavic studies of the Polish Academy of Sciences and University of social psychology in Warsaw. He also was a career diplomat, currently working at the permanent representation of Poland to the EU in Brussels.

Project is called “the Identity of Kaliningrad region since 1991 to this day: factors and directions of change.” The project was carried out in the framework of the Preludium offers (2015-2017).