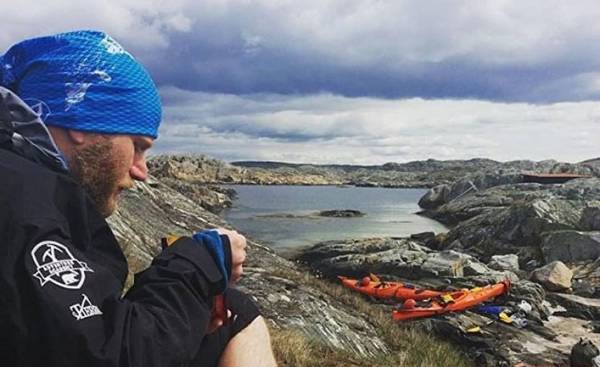 Before the vote less than a month, and mats Goldberg (Goldberg Mats) is among the main candidates for the Russian participation in an extreme reality show “Game2: Winter”.

If he is elected, ahead of the nine-month hell in Siberia and 15 million crowns prize pool.

“The most difficult thing in all of this — to stay so long away from the kids,” he says.

“Wait a minute, I’ll just take off waterproof protection with the phone.”

Mats Goldberg 36 years, and he now lives as if he were in the wilds of Russia. When Expressen spoke to him, he was engaged in rowing on a sea kayak near the island Black. Since January, he spends almost all his free time training and training.

But it’s still nothing compared to the challenge that may wait for him in the summer.

Nine months of struggle for life in Siberia

It then starts a Russian extreme reality show “Game2: Winter”. 30 participants from all over the world will be in a deserted area of nine square kilometres in the heart of Siberia. There they will have to survive for nine months without any contact with the outside world. Not even the crew — instead of the round day will follow two thousand cameras.

“Without a doubt, the hardest thing will be mentally. First and foremost, boring. When the camp is undeveloped and life adjusted, will struggle with boredom,” says mats Goldberg.

The reality show attracted a lot of attention when the copyright holder of the TV program Eugene Pyatkovsky last year announced that in the struggle for a prize is allowed by any means: “Fighting, drinking, murder, rape, Smoking — all,” he said in an interview with Sibirian Times. This allowed critics to compare Russian reality show with the popular film series “the Hunger games”, where under the supervision of cameras fighting for the lives of poor young people.

Mats Goldberg believes that sensational quote was taken out of context. Russian law continue to apply in relation to the participants of the show “Game2: Winter”:

“The media in varying degrees, made it look as if everything is permitted, but actually it probably is that the organizer does not take responsibility for what will happen in the course of the show. And similar disclaimers have taken place even before the show “Survivor””.

“The hunger games” in Russian

Apply for Russian participation in an extreme reality show could anyone. 30 participants will be chosen through voting on the website of the TV program, which ends in June. Mats Goldberg is now on 18th place, and he has a good chance of being invited into the program.

In addition to severe frost (in winter the mercury can drop to minus 50 degrees), Siberia, the range includes wild beasts, in those places inhabited and wolves, and bears. But not the physical deprivation frighten most.

Will miss the children

The toughest test for the mats will remain at home, Alvdalen. There it will wait for two children.

“To live so long away from the kids — that would be the hardest, I think. They have me and ill know roughly what I have. The hardest part is the time. I tried to look at it through their eyes. They know what time it is, but only with the passage of time you start to really feel like you missing someone,” says mats Goldberg.

In April 2018, the competition will end. The remaining building will be able to divide a record high with the amount corresponding to 15 million kroons.

“Keep some form of morality is more difficult than getting there. Then I think everyone will play seriously and all that. To do this, I think it is more likely to go on mutual aid and support,” says mats Goldberg.

How will the “Game:2 Winter”

According to the organizers, the camera will turn on 15 June. Participants will have to choose outfit, and then helicopters will be taken to the island of Siberia, where it will be a competition.

Two thousand cameras will follow the participants all day. Life on the island will be broadcast online and on television in many countries, the organizers said.

Participants will be trained the Russian special forces, and then they have, by and large, to fend for themselves. Initially, the organizers said that they will not intervene, even to prevent murder or rape. But the Russian laws are in force, so if someone breaks them, he is eliminated.

The rest of the participants can leave the island when they themselves want to go home. The remaining 1 April 2018 will share the prize Fund — according to available information, it is 100 million rubles (15 million EEK).