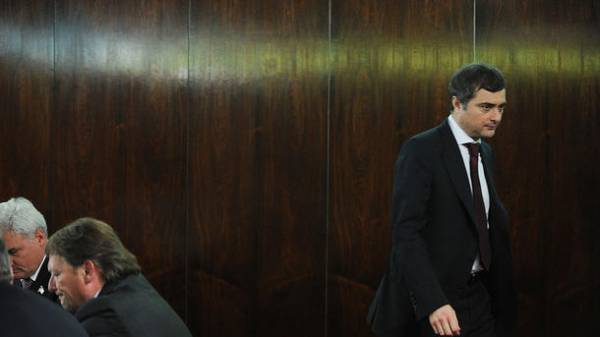 Russian presidential aide Vladislav Surkov defines the internal politics of the Pro-Moscow administration in the Russian-occupied regions of Donetsk and Lugansk regions and decides who is what position it will take. This writes Reuters, reports ZN.ua.

Three men who held high positions in the separatist structures, told Reuters, as Surkov controls the situation on the ground through specially selected Trustees, who regularly report to him about the situation, as he used assistants for the organization of the “elections” and worked to create structures of the occupation administration, which are considered with the desires of Moscow.

“Any call from Moscow was seen as the office a call from God himself and was not discussed, were accepted for execution immediately,” said Alexei Alexandrov, one of the leaders of the “Russian spring” in Donetsk, who later left. Two other prominent separatist confirmed this information, but refused to be named.

All three reported that Moscow has gradually forced most of the leaders 2014, threatening them with death and imprisonment. “At first we were somewhat naive, I thought that uncle in Moscow may simply not understand what’s happening here, when us around here ridicule the Moscow comrades, but after two or three years, and I last spoke with Surkov in November (2016), I realized that everything is understood, and just wanted us to shut up,” said one of the three former leaders of the separatists.

All three say that Surkov played a key role in the appointment of Alexander Zakharchenko, the leader of the group “DNR” after the meeting in the Kremlin. At the time of the Donetsk separatists were led by two people who called themselves as volunteers from Russia. A former journalist with far-right views Alexander Borodai was “Prime Minister DNR” Igor Strelkov, who spoke of himself as a former FSB officer, he commanded the armed men. After what Alexandrov called a verbal indication from the Cabinet Surkov, Strelkov and Boroday quietly resigned to Zakharchenko could take on the powers.

Team members Surkov did not call anyone in Donetsk, their real names, using instead names. In response to the question, how does he know that they were working for Surkov, Alexander said: “Yes, they did not hide it. Loudly at the first opportunity stated”.

Five sources, including close to the presidential administration, and another who worked with Surkov in the Kremlin, said he regularly meets with the leaders of the separatists in the occupied territories, and Russia.

Earlier it was reported that the Russian presidential aide Vladislav Surkov involved in the organization of Russia’s aggressive actions against Ukraine and the security Service of Ukraine has repeatedly recorded his visit to the occupied territory of Donbass.