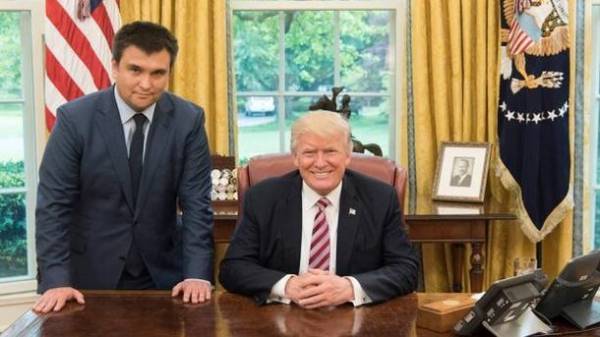 Meeting of the US President Donald trump with the foreign Minister of Ukraine Pavlo Klimkin to organize, to demonstrate parity of the foreign policy of the Americans against Russia and Ukraine on the background of the White house visit of Minister of foreign Affairs of the Russian Federation Sergey Lavrov. This opinion was expressed by political analyst Volodymyr Fesenko, reports 112.ua.

In his opinion, trump and Klimkin showed that between Ukraine and the United States to maintain and develop partnerships.

“In yesterday’s meeting had very significant symbolism. I think this meeting was specially held for parity, in order to avoid any insinuations that Lavrov met trump, and Ukraine was ignored. I think in the States it felt, and so the demonstration organized a meeting with trump Klimkin. In particular, and in order to organize critics of trump within the United States that any flirtation with Russia, there is parity in relations with Russia and Ukraine,” said Fesenko.

He also stressed that in the case of trump’s statement on responsibility of the Russian Federation for the implementation of the Minsk agreementsis nothing new.

“The United States since the Obama’s believe that Russia is responsible for the implementation of the Minsk agreements. Similarly, and Ukraine. It is also necessary to remember. There is nothing new here,” added the analyst.

As told in the Ministry of foreign Affairs of Ukraine Pavlo Klimkin during a meeting with the highest leadership of the United States received assurances of full support of Ukraine by Washington. The Americans also confirmed the understanding of the situation with the Russian aggression against Ukraine.