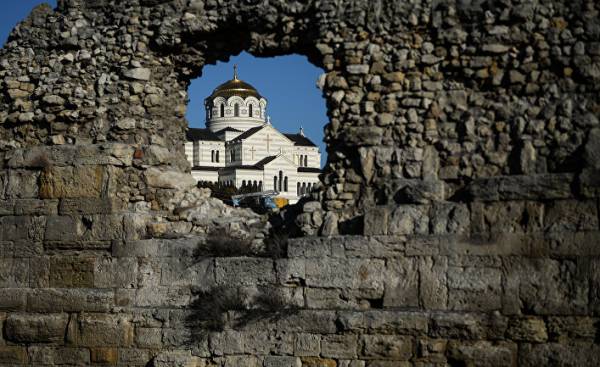 Today the President of Ukraine Petro Poroshenko can say that the blockade of Donbass to nothing lead, and the volunteers who organized it, criminals. But tomorrow, judging by the situation and guided by the political jealousy of the success of the Nazis, Poroshenko stands at the head of the movement “long live the blockade.” Rusyn leader and entrepreneur Alexander Gegalczij just returned from the Crimea and told Parlamentní listy, how things are going there.

Alexander Gegalczij: I went there not to celebrate and salute not seen. For me it was an educational trip, and in this sense it lived up to my expectations. I have always been in Yalta, but now I visited the beautiful Livadia Palace, which hosted the Yalta conference. I really liked the idea of Crimean politicians to hold a similar meeting at the highest level.

I spoke with passersby spontaneously. We participated in several interesting conversations with the leadership of the Republic of Crimea, an independent organization that fights for the protection of human rights, with the chief Muslim mufti of Crimea, chairmen of associations of minorities, including Crimean Tatar, Greek, Jewish, Armenian, Ukrainian and others. We talked with the President, the rector, professors and students of the local Polytechnic and pedagogical universities. I had a feeling that in the Crimea should go to the experts from the European Union, so they have learned to cope with the migration crisis.

– You went and Czech MP from the party SPD Jaroslav Golik. What were you talking about?

— I was already a little familiar with Mr. Golik after his meeting with the Rusyns, which took place during a difficult trip to Ruthenia, which, in modern language of the mainstream, “after the war was annexed by the bloody dictator Stalin, and now occupied by the peace-loving democratic coup Poroshenko”. Yard Golik is neither the Brussels nor the Prague political bureaucrat. And in Subcarpathia, and in the Crimea he went to familiarise himself with the situation on the ground.

On the promenade in Yalta was something incredible. He not bad speaks Russian, so he walked along the promenade and asked people about what was happening, removed all on mobile phone. The people were inspired and motivated to be Frank. It was noticeable that Golik is not dry pros, not some reporter with a scorched soul, armed with devices for thousands of dollars and followed by a suspicious translators and two security guards. By the way, the Broom there was turned an army of all kinds of reporters.

– And then he for five years denied entry to Ukraine…

— At the end of the Yard said: “These happy Crimeans to join Russia!” And it was his decisive step. The next morning Ukraine declared him persona non grata. So attention! Who wants to know about Crimea the truth, must be ready for it. People honored the “ban from Ukraine”, as rewards, for example, of the order of the White lion. But, in my opinion, Ukraine is a shame. It punishes honest people who want to know the truth. MPs from political parties ČSSD, ODS, TOP 09 want, so that the punishment they fear is not necessary.

I also have this “reward”. I was an observer at the elections in Lugansk. And if I said that these elections were observed drunken Russian Cossacks who puts a Kalashnikov to their heads of opponents, it would be in Ukraine dear visitor. And now, perhaps, I was awarded the title of “double persona non grata in Ukraine.” I feel sorry for her.

– When will be opened the traffic on the bridge across the Kerch Strait?

* The bridge will open to traffic in late 2018. Some time the bridge will be used in the test mode, and in the middle of 2019 already there will be travel at a speed of 120 kilometers per hour. At the end of 2019 will be opened and railway communication. Unfortunately, there are many risks, including the threat of terrorist acts by the Ukrainian paramilitary gangs, or directly of the security Service of Ukraine (SBU). After all, they enjoy international support. They blew up power pylons that supplied electricity Crimea. But the international community did not condemn the vandalism.

– What do you think about the statement by the Ukrainian Deputy Andriy Artemenko that in the Crimea can claim the US because the USSR had not paid them the debt?

— I even to speak of it. All this chatter of some Deputy or attorney of a gang, who want to declare itself, and possibly earn some money.

– Some Ukrainian leaders, for example President Petro Poroshenko has recognized that blockade of Donbass to nothing lead. What do you think?

— Today the President of Ukraine Petro Poroshenko can say that the blockade of Donbass to nothing lead, and the volunteers who organized it, criminals. But tomorrow, judging by the situation and guided by the political jealousy of the success of the Nazis, Poroshenko stands at the head of the movement “long live the blockade.” In my opinion, Poroshenko and the Ukrainian part of the establishment does not want to return neither Donbass nor Crimea. Because, if returned, they would have lost all the elections. Kiev and Ukrainian oligarchs recovered from the unrest of great benefit. By the way, often we are dealing with a hidden war oligarchic gangs. Poroshenko supported the blockade because Rinat Akhmetov has not shared with him the profits from the coal trade.

Kiev often talks of return “of all the territories in a free and unitary Ukraine.” But in practice the authorities do something completely different. At the beginning of the conflict in Crimea Ukraine bulldozers dug a channel through which the admitted water from the Dnieper. Northern rural Crimea is experiencing an ecological disaster. What prominent European human rights? Nothing! Stopped rice cultivation, the vast area turned into a lifeless desert.

– How would you comment on the murder of former Russian Deputy Denis Boronenkov in Kiev?

— He was a controversial politician. What would the Czechs, if in Africa killed Crateria? The funny thing is that immediately after the assassination of President Poroshenko said that he sees the incident on the trail. I feel sorry for that poor investigator who has been assigned this case. He will have to find a trace of Moscow or even better trace of Putin himself. But if not, he would get into trouble.

– Will the United States of America, headed by Donald trump to move closer to Putin’s Russia?

I personally do not believe such. It’s such a nice dream, but civilizational differences between these two countries are traditionally very deep. Putin can go fairly far. He enjoys unequivocal support of the population and around the globe. But Trump would have to go against the liberals in the US and the EU, that is against the mainstream. He will not be able to. On the contrary, he will always have to put pressure on Russia to Flex its muscles, what Russian does not love. The only thing that can succeed, so that partial cooperation in the fight against terrorism. Anyway we have another wave of weapons. Unfortunately.

Born in a Russian family in Uzhgorod in 1949. In 1967 — 1971 he studied mechanical engineer at the Moscow aviation-technological Institute, then graduated from graduate school in Moscow, was a member. In 1992 he graduated from the school of the market economy for executives of the Union at the company Carl Duisberg in Germany. He then worked in management of some companies and led international trade and production projects. For several years he had a Czech passport, and he earns intermediation in trading operations in Europe and Asia. In Ukraine Alexander Gegalczij persona non grata, because the team of foreign observers present at elections in Lugansk, and also for the fact that he constantly draws attention to the infringement of the rights of Rusyns. Alexander Jagalchi is Chairman of the international Fund “Russian award”, which awards the Ruthenian and Russian writers prize under the same name.