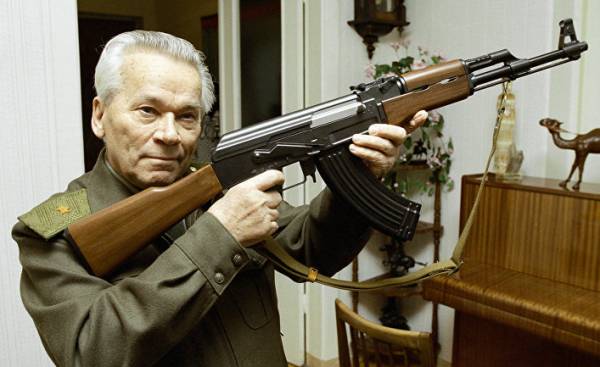 Several months ago the Syrian free army fighters tried to drive out of the small town on the border with Turkey us military from the special forces, and they shouted insulting words such as “infidels”, “crusaders”, “dogs” and “pigs.” These militants, who, in fact, receive support from the United States, brandished the most recognizable weapon of all time — a Kalashnikov. The force of the impact of this image should not be underestimated. Largely thanks to the film, television and the video game industry, most people associate the AK-47 with the terrorists in the service of tyrants, vicious drug cartels, and fanatical rebels. And, indeed, the active use of the Kalashnikov assault rifle during a shootout with police in Dallas, as well as during attacks by Islamists in Paris strengthens this link.

The original Kalashnikov rifle was designed for the Soviet Army, and also as a means of combating the spread of communism across the planet. Today the turnover is over 75 million variations of this assault rifle, which produce about a hundred countries. This machine is easy to make, it is easy to use and reliable, which makes it very effective. The Kalashnikov has been used in countless conflicts on almost all continents. The history of this weapon is directly linked to areas of fighting, saturation of the market and inadequate supply of arms.

To understand how the Kalashnikov has become so important, you should refer to the context in which it was created.

Mikhail Kalashnikov learned well the lessons of the Second world war and used the experience to create your own machine. During the war the Soviets came to the conclusion that an intermediate cartridge would be ideal for use by soldiers on the front line. Unlike large-caliber variants, intermediate cartridge easier to apply when firing bursts, it is easier to that will allow soldiers to carry more ammunition. The Germans developed their own cartridge 7.92 mm Kurz assault rifle called Automatic carbine 42 (Maschinekarabiner 42), which then becomes the basis for the creation of the assault rifle StG44 (Sturmgewehr).

This rifle had very high rate of fire, more powerful cartridge than the SMGS (submachine guns), but it was lighter machine guns (machine guns). Assault rifle StG44 was a lot different from the weapons that the Soviets used during the war, especially from a submachine gun PPSH (high rate of fire, but the pistol cartridge) and rifles Nagant-Mosin (large caliber, but with a sliding gate). Convinced of the usefulness of German design, the Soviets tried to create their own version of this rifle. The result was the AK-47, which allowed Councils to close the gap in the capabilities of different weapons that they used during the war.

In addition, the Soviets wanted to get a rifle that was durable, easy to manufacture and cheap to manufacture. Field conditions of the Second world war on the Eastern front was particularly difficult and require an extremely reliable weapon. Kalashnikov created a machine that not afraid of any dirt or sand. This helped keep aiming and accurate fire from a Kalashnikov assault rifle on targets at a distance of several hundred meters even in the appalling conditions of his detention. Firepower, the ability to use in extremely adverse conditions and reliability firing at this size — all this has significantly altered the idea of this weapon in the late 1940’s and has become a modern standard. I should say that the AK-47 was cheap, and its production required a minimal amount of materials.

Victory in war is not only an opportunity to kill the enemy; crucial cost efficiency. The following models of this kind of rifles (especially family AKM) will become even cheaper and even easier easier to manufacture due to the improvement of the production process. During the cold war, the Kalashnikov has provided the proletariat of the world means for implementation of the Communist rebellion. Such mentality is based on permanent readiness for war and revolution made the production of weapons a major component of a planned socialist economy. Moscow has supplied the AK, RPK, PKM and other machine guns and Kalashnikov machine guns to the friendly socialist countries. The advantage of such a simple device was that the Soviets could provide drawings of the machine in order to be able to produce in other places. The AK-47 and its modifications can be made in almost any country.

AK was first actively used during the Vietnam war. American soldiers could experience in its effectiveness when the peasants, armed with this assault rifle, turned out to be resistant enemies. Washington is serious about this experience and continued to develop the assault rifle AR-15 (later it was called M-16), with the Vietnam lessons. As a result, Washington started to supply its troops a rifle that was lighter, but was able to suppress the firing points. In fact, America said goodbye with such a heavy rifle like the M-14 as a standard weapon and was approaching the Soviet model. The prevalence of Kalashnikov and other created under the influence of the weapons contributed to the fact that it was often used in armed conflict during the cold war.

An example of the global spread of AK may serve as El Salvador 1980-ies, described, XI. John. Chivers (C. J. Chiver) in his book “the Gun” (The Gun), which represents the history of this assault rifle and its impact. In force in El Salvador, the Communist partisans were at first armed action using local abandoned military equipment, and also appeared they have additional features. Government forces at some point found that different variants of the Kalashnikov assault rifle, the rebels started getting out of North Korea, East Germany and Yugoslavia, and ammunition were supplied to them from Cuba. Such supply chain has shown that the Soviet model of small arms exports to the socialist countries worked around the world. A Kalashnikov rifle was distributed through a worldwide network, it could deliver in any conflict zone, and it was due to the fact that a large number of countries involved in its production.

During the Soviet-Afghan war, the Mujahideen began an armed conflict with such antiquated weapons as the rifle is “Boer” (Boer) and British Afghan war (Russian General staff presented a detailed description of how supplied weapons to the participants of the Afghan conflict in the book “The Soviet-Afghan War: How a Superpower Fought and Lost”). Friendly to the Kremlin, the government of Afghanistan even before the war got Kalashnikovs, and also other types produced in the countries of the Warsaw Pact weapons. The CIA, wealthy Saudis and other people and organizations interested in the defeat of Moscow, organized a steady stream of weapons sent to Afghanistan. As a result, the Kalashnikov rifles were used against the country, the protection of which it was created. After several years of hostilities, thousands of firearms were abandoned in this country, and this gave the opportunity to local military rulers the opportunity to create the Taliban and continue to trouble American strategists trying currently to stabilize Afghanistan.

Kalashnikov continued to add fuel to the fire of guerrilla war, terrorism and crime after the end of the cold war.

Although Kalashnikov himself claimed that his machine is a weapon of liberation, the AK is more often seen in the hands of terrorists and members of drug cartels in Mexico. Illegal transportation across the border Kalashnikovs also seems to be easier than shipping the materials needed for the production of bombs and other destructive devices, and partially for this reason, the AK-47 was named as the new preferred tool for terrorists. Countries and non-state actors also supply Kalashnikovs to arm the rebels and carrying out violent acts in Libya, in Ukraine, in Mali and in other countries. Very often in Syria, the Kurds, the Islamic state (banned in Russia organization) and government forces directed at each other the same weapon.

But what does all this mean for American foreign policy? Syria and Ukraine have a lot of pressure on high-ranking American politicians and should make for many obvious conclusion — supply of small arms in distant places are not the actual conduct of foreign policy. Washington has almost no control over where in the end it turns out supply weapons. The decision about arming the Afghan police produced in the Hungarian versions of the Kalashnikov assault rifle was, at least, problematic. American rifles currently get on the black market in the region. This weapon is to steal it, somewhere, throw, illegal trade — helps to support the Taliban, Islamic state and other groups.

There is no assurance that the Pentagon is directly supplying the weapons that can be seen on bad video, captured near the Syrian-Turkish border. The Pentagon and the CIA are currently supported by competing rebel groups in Syria, and it makes even less discernible the line that separates freedom fighters from terrorists. Washington should analyze the benefits of such a free-flooding weapons in various conflict zones. The current Syrian nightmare of ambiguity to who is the true rebels, terrorists and who makes this process even more complicated.

Blake Franco is the assistant editor of the National Interest.