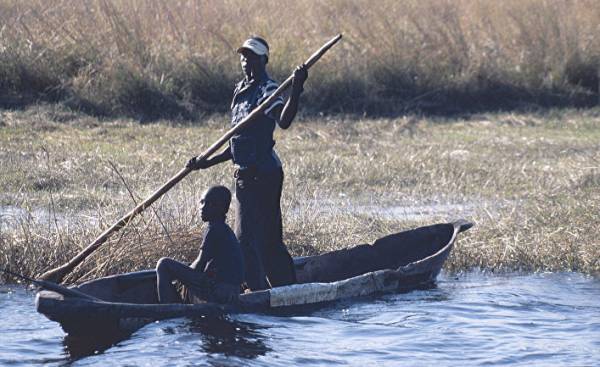 The global slowdown in demand for commodities resulting from slowing economic growth in China had a negative impact on a commodity economy. But the generosity of voracious consumers like China, in the years of rapid economic growth tends to hide the deep-rooted corruption and mismanagement in these commodity-dependent countries. Now that China is the Titanic, but very tough fight for economic growth, these internal flaws cause chaos to corrupt and incompetent States that failed to foresee and consider this fact as the end of an economic boom.

This land country in southern Africa, considered a model of success and prosperity on the continent, since in the past decade, the market of metals and raw materials observed rapid growth. The literacy rate in Botswana increased significantly, with HIV received the drugs, the debt of the country was small, and the state had a credit rating of investment grade.

But then prices collapsed at the diamonds and other raw materials, and coupled with the blatant and rampant corruption among state officials that have tarnished the reputation of Botswana and jeopardized its future.

Today it is obvious that in mining industry of Botswana in recent years, rampant mismanagement, and the executives and Ministers extort money from the national economy, turning it into a cash cow for personal enrichment.

“Now it’s our turn to eat” — said in 2013, the newspaper the Voice of former Secretary-General of the Democratic party of Botswana MPO Balopi (Mpho Balopi). There have been numerous reports about how government officials are cashing in on their positions, and against many investigations were initiated.

Red tape and bureaucratic inefficiency discourages the foreign investors, and Chinese firms have begun to sign supply contracts of raw materials with the countries-competitors, including those with neighbouring Zimbabwe. Public funds are used to provide contracts to those companies who have connections with those in power. Flourished fraud, which had a negative effect even on the Nickel, which is of strategic importance and power generation.

Mining company “Norilsk Nickel”, registered on the London stock exchange, in 2014, purchased the company LionOre Mining International Ltd., but decided to sell its stake in the company to mine Nkomati Nickel and chrome, which is located in South Africa, Mpumalanga. The buyer was the state of Botswana mining company BCL. In September, the financial regulators approved the deal, which is expected to draw several days later. However, Botswana has not done anything to implement this agreement. In October, BCL went bankrupt, and began the process of liquidation, however, Botswana officials said that they have no money to purchase, and that the only way out is bankruptcy.

Of course, the head of the African division of “Norilsk Nickel” Michael MARRIOTT (Michael Marriott) was furious.

MARRIOTT warned that the closure of the BCL “would have a devastating impact on the welfare of thousands of people, as well as a negative effect on the economy of the region, who use the power of a metallurgical enterprise of this company. From Botswana to the world a great reputation of a country with a healthy investment climate. But such actions BCL can put this reputation under threat.”

According to available information, “Norilsk Nickel” intends to sue the government of Botswana. Thousands of local residents will lose their jobs.

“Nornikel” is not alone in his misadventures. Foreign companies are fleeing to Botswana. The Exodus began in earnest in 2010, when then decided to leave BP. In the past year from its coal assets in Botswana got rid of one of the largest South African mining companies Anglo American PLC. The company “ALROSA”, which is a key competitor for De Beers on the world diamond market, after the scandal with BCL will think twice before agreeing to any projects in Botswana.

All this adds to the story-a warning about a country that puts too many eggs in one basket with the intention of getting rich quick.

Botswana has let his people down, clumsily driving the national economy and unprepared to a decline in commodity prices, which is inevitable. The only way to get out of this mess and keep foreign investors in the safely is to turn to foreign experts. Otherwise, fraud and rampant greed of the ruling elite will transform Botswana from a living example of the development of the African continent as a poor and arid country, as it was 50 years ago.

L. Todd wood is a former helicopter pilot, special forces and a trader on wall Street. He writes for Fox Business, The Moscow Times, National Review, New York Post and many other publications.