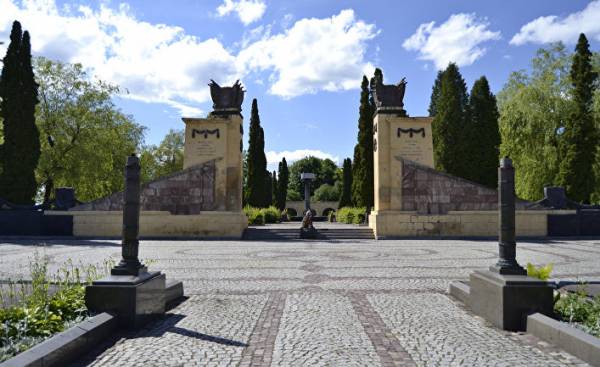 Veterans of the great Patriotic war in Western Ukraine live their last days with the feeling that they lost. “Fascism has again won a victory”, — the nurse of the red army Galina Chernenko. She was born in 1924, started the war in 1941 near Kharkov and graduated in 1945 in Berlin.

Galina I met on the Hill of Glory the cemetery of Soviet soldiers in Lviv. She walked in a black uniform without orders, carrying a bouquet of lilacs on the graves of their comrades in arms. It was may 9, the 70th anniversary of the surrender of Nazi Germany. The gate was on duty activists of the nationalist party “Svoboda” in Bandera uniforms. They did not pass on the cemetery of people with orange-and-black St. George ribbon which is the symbol of the victory over fascism became a symbol of the separatists and Russia, with Ukraine leading an undeclared war in the East. Under the shade of the cemetery wall stood ready with a squad of police in full uniform.
The situation is not conducive to conversation, so we agreed to meet at Galina’s house.

The veteran lives on the second floor of a five-story “Khrushchev” (homes that were built in the USSR in the 1960-ies). Apartment in her small, two rooms, a kitchen, a symbolic size and a small bathroom. “Imagine, — says Galina — we some time lived there six of us: myself, husband, two daughters and two mothers — my mother-in-law”. Apartment is reminiscent of an antique shop, there is a tube radio with magic box and the TV “the ruby”.

For 90-year-old resident of Lviv Galina Chernenko (nee Gantry) Victory Day will always remain sacred holiday. Every year it puts on a ceremonial uniform and goes to the Hill of Glory to the graves of his comrades. “The last few years I have put the order in a bag, — says Galina. In previous years it happened that different people, mostly activists of “Freedom” tore me a form because they irritated my medals, especially the medal “For the victory in the great Patriotic war” St. George ribbon”.

Medal “For victory over Germany in the great Patriotic war 1941-1945” was established by decree of the Presidium of the Supreme Soviet of the USSR of 9 may 1945. It was the most common in the Soviet Union award until 1995, it was awarded 15 million people (including soldiers of the Polish Army Ludovit).

During the war, Galina was a nurse. She mobilized in 1941 and was fighting way from Kharkov to Berlin. The way to the German capital passed through Majdanek and Warsaw, for which she received a medal. “I did not count how many injuries I managed to make the field of battle,” she said — rather, it was about thousands. As a result, after the war, we could not have children. Their first daughter, Lena, I gave birth at 36 years old. Three years later, was born the youngest — Alla”.

Father and brother of Galina died in the war, survived only a mother. Galina remembers how, after liberation of Kharkov she ran home in a field uniform with a gun. “The mother almost fainted, she thought I was lost, — the woman remembers. — She cooked porridge and gave it to me. I fed a little bit, and already had to say goodbye”. Brother the last time she was seen in March 1943, he was standing in the back of a truck, and she and her squad was on the sidelines. “We waved to each other hand, he was so good I smiled. This image stuck in my memory. A few months later the brother died.”

The front was moving to the West. In Volhynia there is a new danger. “We had to beware of the units of Bandera, who attacked on the sly. It was very easy to get shot in the back, — says Galina. — Now you know why I’m shaking from these clowns who stand at the gate war cemetery”. 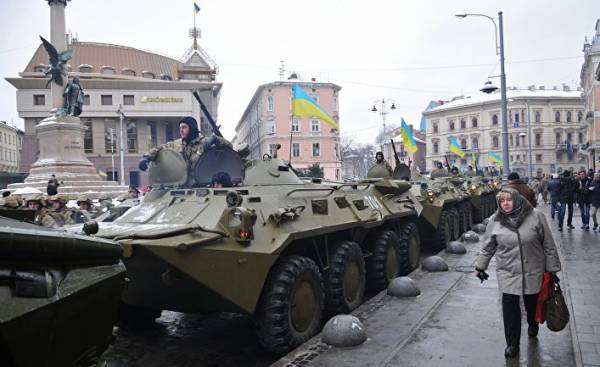 © RIA Novosti, stringer | go to photobackgrounds of a column of armored vehicles before the “March of the defenders of Ukraine” on the occasion of the 25th anniversary of the Armed forces of Ukraine, in Lviv

In memory of Galina reflected the Majdanek concentration camp. Paper bags with human hair, the mountains of dead bodies, prisoners who looked like the living dead, and the guard torturous. “She picked out young women and caused them terrible injuries that they could never have children, — says Galina. — I treated wounds of these women and they told me about her. I can only say one thing: the guard did not wait for the court. Guys shot it under the barracks. It was impossible not to shoot”.

Another strong memory is a trip through Warsaw in January 1945. “I have seen many ruined cities, but Warsaw was a special case. Such ruins were not anywhere”. As Galina said, the war was only one plus. It was easy: here, there is the enemy. “If not for our victory, we would today not talking to you, you wouldn’t be born”, — says Galina. With modernity to understand more difficult. For example, how to accept the fact that his beloved daughter married a German and moved to Germany? “Well, if she’s happy, apparently, and German can be a good person?” — says the woman.

“Can a person my age to have dreams?— she repeats the question and doesn’t think long on the report. How can we live without dreams?— unexpectedly vigorously she says. — I have two dreams: I want a granddaughter came to see me and not only sent cards and congratulated me on the phone. And I want to see Warsaw. It is now perfectly recovered, I saw in photos and on TV. But to see with your own eyes is quite another matter, isn’t it?”

Lubomir Melnychuk, whose friends call Lyubchik, is a young Chairman of the faction of deputies of the party “Svoboda” in Lviv. He has a clear opinion about celebration 9 may. “Ukraine is not a happy occasion. We can say that at that moment Kolyma won Auschwitz. We do not prohibit honor the memory of the victims of the war, but do not assume that may 9 was the day of the Bolshevik demonstrations, the rehabilitation of Stalin or the criminal Soviet regime. The Communists, which is financed by Moscow, prey on veterans and use them to glorify communism. We can’t let them. Our history we need to re-write taking into account all the facts and all the historical truth, including the Second world war”.

The words are followed by actions that unfolded in Ukraine. After a wave of “leninabadis” (demolition of monuments to Lenin) came the de-communization of the names of streets and squares. For example, in Chernivtsi street Nikolai Vatutin (Soviet General who in 1944 died at the hands of Bandera) was renamed the street of Stepan Bandera.