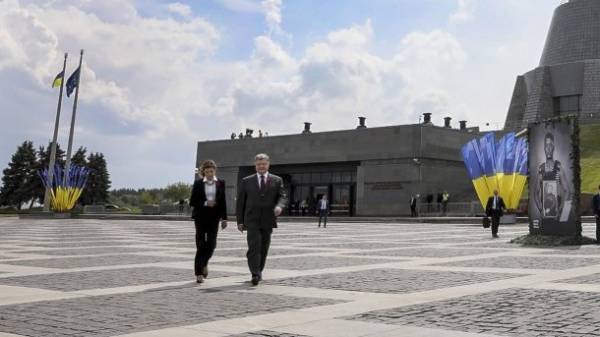 The President of Ukraine Petro Poroshenko expressed his respect and gratitude to all the fighters against Nazism. He said this during the opening of the photo exhibition “the Fourth generation”.

“Ukraine today, along with the rest of Europe, celebrates the Day of memory and reconciliation. Unconditional is the feat of the Ukrainian people and our great contribution to the victory of anti-Hitler coalition in world war II. I Express my respect and honor all fighters against Nazism. Low bow to you for your deeds and for your victory, dear veterans, ” – said Poroshenko.

Here is the full text of the President’s speech:

“Dear defenders of the Ukrainian state!

Today Ukraine celebrates the Day of memory and reconciliation, said it, along with all of Europe, having every right to be. Indisputable is the feat of the Ukrainian people, our great contribution to the victory of anti-Hitler coalition in world war II.

Express our deep respect and honor all fighters against Nazism. I bow to you for your feat, for your victory, dear veterans!

When our ancestors in the 44th and 45th were advancing on Berlin, they had no idea, and in my wildest dreams, to imagine, that after seventy years of his army in the Ukraine will send to Moscow. And will kill their grandchildren.

Please look at these portraits – the face of the glorious soldiers of the Armed Forces, current defenders of Ukraine, brave people and patriots. Their eyes full of pride for belonging to the glorious cohort of defenders of their land. Photos of ancestors, who they hold in their hands, testify that to be a warrior, a defender of the Fatherland – a tradition that has long been revered by the Ukrainian people. I want to thank the photographers for the high quality work of art.

“The fourth generation” – children of an independent Ukraine, those who are now 20 – 30 years. It is the young flower of the nation. It is people who are mindful of their courageous ancestors to defend Ukraine from Russian aggression. This generation, our modern heroes, who every day write the pages of history, writing with their blood, then. It is the “fourth generation”, now took up arms to save their country, encourages us again and again to browse the pages to learn and remember the lessons of the past, and to honor real heroes.

This exhibition should be seen as a symbol of the indissoluble connection generations of defenders of Ukraine. Protect the homeland today are descendants of the soldiers of the red army and the Ukrainian Insurgent Army. They respect their grandfathers and great grandfathers. And those already in heaven must be very proud of the current generation of defenders. It is important to realize that a Day of remembrance and reconciliation this relationship is indissoluble.

Unfortunately, in Europe – war again. Modern Russia as the successor state of the Soviet Union, could not and did not become a peace-loving nation. Remember the Moldovan Transdniestria, Georgian Abkhazia and South Ossetia, the Ukrainian Crimea and Donbass. And Syria, she does not sleep. All this for only 25 years of existence of the Russian Federation. And before that it was Afghanistan in ’79, Czechoslovakia and Prague’ 68, Budapest, Hungary in 56-m.

Today, with the removal of the epaulets and sketch paint tail numbers of tanks and armored vehicles of the Russian military in secret, under cover of night, cross the border of Ukraine. So, without names, without documents, without a uniform burn of Ukrainian land and to fill with blood. Right now the Ukrainian military is an honorable duty. But to be the Russian military means to carry out the orders of the state, does not value the lives of their soldiers, who without a twinge of conscience renounces their dead and wounded soldiers.

For Ukrainian society and for me personally as Supreme commander of the death of every Ukrainian military – the pain and irreparable loss. The feat of our winners, who protect Ukraine from the Russian aggressor, will live forever. To perpetuate I their time and signed a decree on creation of the Memorial of Ukrainian heroes who gave their lives for freedom, independence, sovereignty and territorial integrity of Ukraine. Recently I was approached by dozens of public organizations of veterans of the Antiterrorist operation, presented his vision of the memorial complex. According to the authors, the memorial should be located in a historic place. Would like to quote: “It should be as an open space, a large area where people could not only put flowers or wreaths, but also to spend some time to think, to remember, to comprehend the past, present and look to the future”.

Today we have here representatives of public organizations, which appealed to me. Thank you for the initiative and emphasize that in General, I agree with your proposed approach. Should be soon announced a nationwide contest that with your participation and will determine what should be the structure of the Memorial and its content exhibits and artifacts.

Find the best historic locations to host the Memorial of Ukrainian heroes than these high hills of the right Bank of the Dnieper, not to find. It is a place traditionally visited by hundreds of thousands of people, and the trail here will never stop. Consequently, all of the territory that will host, in particular, national Museum of history of Ukraine during world war II, as well as the future Memorial to the participants of the antiterrorist operation, should be the sole Memorial of Ukrainian heroes. You can assume that the political decision has already been made. In my opinion, this approach will argue adamantly and sustainable connection between different generations of defenders of Ukraine. This will make it possible to perpetuate the memory of our heroes.

Glory to the veterans of the red army and the guerrilla movement!

Glory to the soldiers of the Ukrainian insurgent army and all the participants of the national liberation struggle!

Thanks to all who defended Ukraine from aggression by the Nazi Third Reich!

Glory to the Armed Forces of Ukraine, National guard, security service, border guards, the volunteers and the volunteers, all the military forces that protect our country from enemy attacks, Russian Federation!

Recall, April 9, 2015 the Verkhovna Rada of Ukraine has set may 8 as the Day of remembrance and reconciliation to honor all victims of the Second world war. The law was adopted in accordance with the recommendation of the UN resolution of 2004, declared 8 and 9 may as Days of remembrance and reconciliation and invited the member States of the UN, besides the celebration of his day of victory or liberation, to observe annually a day or two as a tribute to all victims of the Second world war.

Thus Ukraine joined the European tradition. The symbol of the Day of reconciliation and victory Day in Ukraine has become a red poppy. It is an international symbol of memory of victims of war and civil conflict.