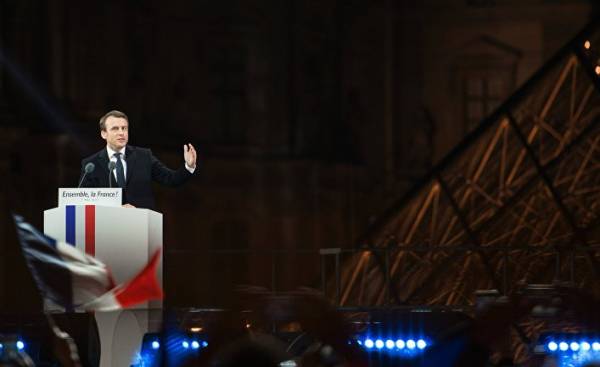 Immediately after the announcement of results of the second round of the presidential elections, the newly elected President delivered a speech to the citizens of France. “I want to appeal to all of you, whatever your choice,” he said. Then Emmanuel macron went to the Central square of the Louvre, where he gathered his supporters to re-contact them with the speech. Macron crossed the area on foot and alone, to the sounds of the European hymn “Ode to joy” by Beethoven.

Addressing the residents of France immediately after the announcement of results of the second round of the presidential elections, Emmanuel macron recalled the “long confrontation” during the presidential campaign preceding his election, and thanked those citizens who “gave him confidence” and supported his candidacy.

“But now I want to appeal to all of you, whatever your choice,” he told the French in his first post-announcement speech.

Among the challenges he will have to overcome, macron said “moral weakening” along with the economic, and therefore sent a “Republican hi” to her opponent in the second round, the head of NetFront marine Le Pen. “I respect those who split in the country was forced to vote for supporters of radical positions. I understand them,” he said.

He further promised to protect the interests of France and Europe. “We are talking about a civilization — he said, — our attitude towards life, our freedom and values.”

“On your behalf, I send friendly greetings to the peoples of the world — continued Emmanuel macron, and want to tell their leaders that France will be attentive to the balance of power in the world.”

France, as underlined by the newly elected President, will be in the forefront of the fight against terrorism, both on its own territory and in the world.

“Opens a new page of our history, and I hope that this is the page of hope, ( … ), tomorrow should begin the renewal of our political life”.

Emmanuel macron briefly thanked his predecessor, françois Hollande, for the work done and moved on to the tasks that will face him during the five-year term of office.

Then Emmanuel macron went to the Central square of the Louvre, where he gathered his supporters to re-contact them with the speech. He crossed the area on foot and alone, to the sounds of the European hymn “Ode to joy” by Beethoven.

“Thank you friends! he said tens of thousands of supporters. — You won! France has won!”

The newly elected President reiterated that he respects those who did not vote for him, but for marine Le Pen, but will do everything possible so that in five years they “had no reason” to re-vote for the extreme right. “Gathered here today are the people of France, he stressed his desire to see the country United.

— The world looks at us, he continued with enthusiasm, and waiting to France had left itself”.

He mentioned the French army and the forces of law and order, not forgetting workers, businessmen, farmers, students and pensioners.

His supporters macron called “majority,” stressing that “six weeks”, that is, during the parliamentary elections, he will again need their help.

“We will not bow down to fear, lies and updochristian, long live France, long live the Republic!” he concluded his speech. After the scene up the family and friends of the Makron, the square sounded the Marseillaise.