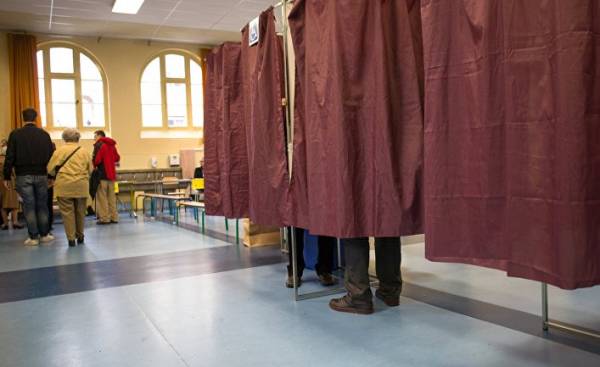 In France, the main finished voting in the presidential election. Most polling stations closed. However, the vote is still ongoing in major cities.

By 17:00 local time the turnout in the second round was significantly lower compared to the two previous elections.

Polling stations opened in France at 8:00 local time and will close at 19:00. As expected, by this time will be known the results of the exit polls.

More than 50 thousand police officers provide security during the elections.

Both presidential candidates have already voted. Emmanuel macron along with his wife Brigitte had voted in their own candidate, a centrist resort town of Le Touquet in North West France.

The leader of “National front” marine Le Pen voted in the polling station of the small town of Henin-beaumont near Lille in the North-West of the country.

Official voting results will be announced on may 11, but actually the name of the winner will be known early.

Liberal centrist macron in favor of further deregulation of the economy and supported by the European Union. At the same time, Le Pen is a French nationalist, anti-immigrant program. She wants to abandon the Euro and hold a referendum on the country’s membership in the EU.

Polls and observers previously predicted a victory to the Macron, however, according to analysts, the low turnout may significantly undermine his chances.

After the end of voting candidates will speak at rallies of his supporters in Paris.

Despite the fundamental political and ideological differences, both chose the historical places of Paris associated with the monarchical past of France. However, according to representatives of their election headquarters, there is no subtext behind this look is not necessary.

Macron rally will be held on the square in front of the Louvre, the residence of the French kings until the second half of the XVII century, when Louis XIV built Versailles.

The candidate has chosen this place after the city authorities refused to allow him to rally on the Champ de Mars before the Eiffel tower out of fear that protesters would ruin the lawn.

Kind of trampled grass in the center of the city could produce an unpleasant impression on the members of the International Olympic Committee, which is just a week will come to inspect the French capital within the framework of consideration of its application to host the Summer games in 2024.

The area in front of the Louvre, where he set the stage which will be the Makron, is exactly halfway between the Concorde, where in 2007 celebrated the victory of Nicolas Sarkozy, and place de La Bastille, place of the triumph of Francois Hollande in 2012.

Marine Le Pen will appeal to supporters in the hunting pavilion of Napoleon III in Vincennes forest in the South-East of Paris.

The administration of the pavilion disown Association with the ideas of the “National front” by posting on its website a statement which said that supporters of Le Pen “might as well have rented dozens of other places in France”.