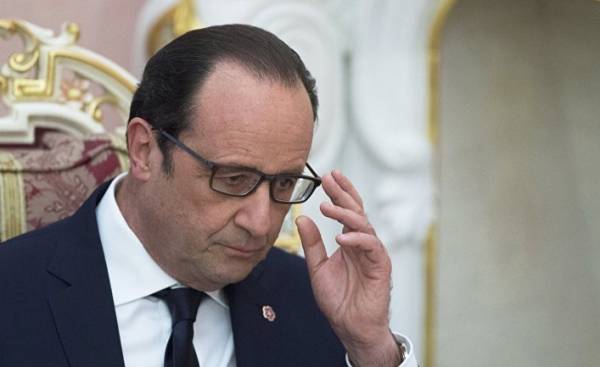 Farmers have a special status in France as the food is more important than religion, money and, often, sex. In recent years, when the President was a socialist Hollande, this repeatedly used. Farmers once brought their tractors to go to Paris, to block the movement and require more support. And they got it.

However, during a visit to the fair between presidents and disappointed farmers several times broke out is not particularly friendly discussion.

• Socialist Francois Hollande was elected in the second round of the presidential elections in 2012, gaining 51,64% of the votes.

• In December 2016, he announced that he would not again stand as a candidate at the next presidential election.

• During the first round of the presidential elections of 2017, the socialist party won less than 7% of the vote. Former economy Minister Hollande, a non-partisan politician of the centrist Emmanuel macron, by contrast, won this round, with 24% of votes.

• The second round will be held on Sunday, may 7. According to public opinion polls, the macron it will triumph over its rival, the representative of the nationalist and conservative forces of marine Le Pen.

“Nothing,” said one of them in front of running TV cameras”. “They didn’t did,” said another.

Hollande replied politely: “It is not, we will help”. “Not enough,” said the farmer.

“But we do not set prices on the world market”, trying to defend Hollande. But none of them convinced.

Clashes were characteristic of the time of the presidency of françois Hollande. And for France, which it leaves when you are going to leave the presidency. On the one hand, it made the country stronger economically. On the other hand, the French are very disappointed.

“Francois Hollande leaves after itself much more unstable, irritated and divided France, than when he came to power. However, France economy is now in better shape, and unemployment, and the debt reduced. But the French themselves, the report does not give,” explains Dave Gerard (Gérard Davet), a journalist of the newspaper Le Monde and one of the authors of the book “Un président ne devrait pas dire ca” (“the President would not need to say this…”).

In the heart of the book — 61 an interview given by Hollande after 2012. Many believe that the book was “the last straw”, causing the President did not stand as a candidate again.

The political scientist Jacques Relan (Jacques Reland) from the research center Global Policy Institute indicates that in fact, Hollande has managed to achieve a number of results:

“Because of all this criticism simply forget a lot of good. In the past year, the economy has created more than 120 thousand new jobs, but the country has a demographic problem, this leads to the fact that the proportion of the active population is growing, and the unemployment rate is not particularly affected”.

In fact, the unemployment rate declined from 10.4% to 9.7% — soon it will be reduced to 9.5%. But part of this success is due to the success in the practical organization. However, now the country of 600 thousand more unemployed than there were when Hollande came to power.

“His presidency was a disaster. When the authorities allow “the left”, it is in order to become less poor. And now the poor became more. To become less unemployed. And more of them. To pay higher taxes to improve public services. And they have become worse.”

The fact that everything is so bad, to anticipate to be difficult. But it is clear that Francois Hollande himself from the beginning, complicate their situation.

“He presented himself as a “normal” President,” explains Jacques Relan.

But the presidency in France — no easy thing the President has so much power and he is so above all other institutions of that all the normal stops at the moment when he — or she — be at the presidential Palace.

In fact, Hollande — a simple man. Loves football and a good movie. As they say, goes every evening to the presidential Palace to turn off lights and save electricity. But this is not enough.

“The French on the one hand want to have a President close to the people, and on the other hand, a President who would wear Royal vestments. And it’s almost impossible,” says Dave.

Besides, it quickly turned out that the promise of Hollande to be the same as all other Frenchmen incompatible with the role of President.

“It wasn’t elegant, and he was always in the rain,” recalls Relan and refers to the fact that the weather gods have clearly cursed Hollande, as many of his public appearances in the fresh air took place in the pouring rain.

Many would probably wait till the clouds pass. Or, at least, would allow someone from staff to hold an umbrella over you. But not Hollande. It ended up that the British press affectionately dubbed him the “rain man”. But the photos soaking wet President hardly gave the impression of a stately statesman.

Moreover, Hollande has also made a number of errors in the communication plan. He amused the whole world when the tabloid published photos of the President of France, through Paris on a scooter with a croissant on the way to the lover, while the woman was waiting for him in the double bed at home.

Changes on the way

But the point here is, ultimately, not in the image. He made a significant political error. For starters Hollande for too long has proved he’s a social Democrat. In the first two years he ruled the country with people who are in politics were much more to the left than he is.

“At first he pursued a failed policy, when you raise taxes, while people hoped that the redistribution of funds will lead to growth in consumption. This did not happen, because the taxpayers began to disperse. And those who remained, stopped work, because why work if the IRS took everything” – makes a cruel conclusion Christophe Barbier.

In early 2014, Hollande changed tactics and gave the business community for nearly 40 billion euros, almost 300 billion crowns, as tax cuts in the hope that it will create jobs.

“But it was too late. And besides, he had internal opposition, opposed it because he lost his majority. This didn’t work,” continued Barbier.

Many point to the fact that Hollande has contributed to the split of the left wing in France. During the first round of elections on 23 April, the socialist party won less than 7% of the vote. But about 20% of the electorate voted for very left of Jean-Luc Melenchon.

“Contribution” Hollande is in such a bad result of the socialists in the elections is directly linked to the two bills. One was the fact that the Frenchman might be deprived of citizenship if he or she has committed a terrorist act. The meaning of the bill was to show the capacity after the terrorist attacks in France in November 2015. But in Parliament the law was just a pawn in the big game and led to a serious conflict on the left flank.

In the end, he admitted he was not. And afterwards, Hollande was sorry that he put forward.

The failure, according to Gerard Dave should also include reform of the labour market, which led to months of demonstrations by trade unions and riots in the streets of French cities. The meaning of the reform was to make the labour market more flexible.

“The law was much more positive for employees than for employers. But governments failed to explain it.”

Therefore, reform in the end was adopted in greatly emasculated form.

Without a doubt, the best Hollande managed to prove himself in foreign policy. For example, he did not hesitate, sent French troops to Mali, when the authorities in the country in January 2013, almost did not come, the Islamists.

And you can still remember Syria, where Hollande was ready to intervene militarily in August 2013.

“Hollande soon realized that I was supposed to do and was ready. But he was betrayed,” explains Gerard and Dave reminds us how Britain and the United States eventually changed his tune and was therefore not ready to send troops to the country.

If you look at Europe, the estimate is once again becoming more stringent. During the election campaign Hollande promised to fight for more solidarity in the EU. Failed.

“In the EU, it has done nothing. In addition, he is in July 2015, prevented the Greeks to leave the EU, more it’s not made up. Unfortunately,” — said Christophe Barbier.

And this part of the heritage of Hollande clearly evident in the course of the campaign, when criticism of the EU has reached new heights.

He is too little crying

If you look at the results of public opinion polls, Hollande never liked the French more as during the attacks. Each time he was able to unite the country and to find the right words of comfort.

He his feelings never showed.

“He told us that he almost broke down in tears during the ceremony devoted to memory of victims of act of terrorism in “Bataclan”, when they began to read the names of the victims. But it was shot at a close distance, and to show his emotions he didn’t want,” recalls Dave.

But perhaps it would be better if the President crying on camera.

“I think that the French would have liked it if he showed his feelings, showed he the same as them, human. This is one of the most important errors Hollande,” considers Dave.

Actually, Hollande is strikingly honest in the book that Dave wrote with Loom Fabrice (Fabrice Lhomme). For example, he grimaces against some of its Ministers and criticizes the French football team, and the judicial system in the country.

He would never do it in public. And therefore the book could not appeal to Hollande:

“For it was intolerable that we have been able to get him to tell what he was really thinking,” says Dave.

Approximately two months after the book containing 600 “unfiltered” Hollande, the President announced that he will not nominate his candidacy for a second term.

“There is no significant inheritance he does not leave after themselves. He was just one of those who ruled France, as a good accountant” is the rating Dave.