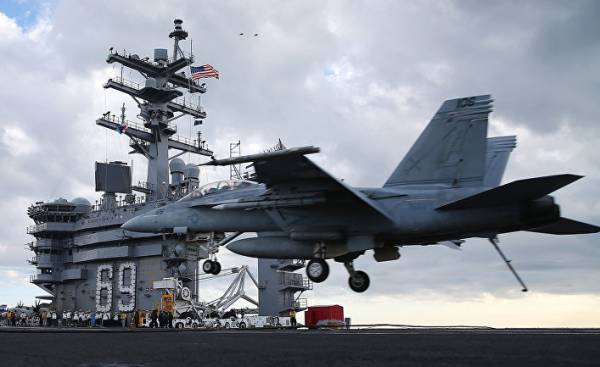 Beirut — Friday, 5 may, a senior Russian diplomat said that the U.S. aircraft and coalition forces will not be allowed to fly over most of the territory of Syria in accordance with the agreement concluded by Iran, Russia and Turkey, which aims to ensure the ceasefire in Syria.

But later the spokesman said that the agreement, which the US did not sign, not “stopping to pursue the terrorists wherever they were in the territory of Syria.” State Department spokesman Edgar Vasquez (Edgar Vasquez) noted that the interpretation of Russian officials by their own agreement “is meaningless.”

A senior state Department official was present in Astana, Kazakhstan, during the negotiations, which have signed the agreement, which took effect at 12:01 a.m. Saturday, may 6. In accordance with this agreement in Syria creates four “areas of de-escalation”, in which the Syrian government and rebel forces must stop battle with each other.

This agreement significantly increased the likelihood that a few years later, during which opponents of the government asked the United States and its allies to create a no-fly zone to protect civilians from airstrikes by Syrian government aircraft, that Russia — an ally of the Syrian regime — finally, it will create such a zone.

However, there are many factors that can derail the agreement as before it happened. This agreement was not accepted by all opposition groups and the Syrian government has retained the right to continue the fight against what it calls terrorist organizations throughout the country.

The statements of Russia also indicate that she may be trying to limit the American military strikes against the forces of the Syrian government, similar to missile attack, which was done in April in response to the chemical attack of the regime against civilians. They indicate that military aircraft of the United States will not be allowed to appear in the most important areas where fighting government troops and rebels, not linked to the Islamic state (a terrorist organization banned in Russia — approx. ed.).

The Russian diplomat Alexander Lavrentyev, a special envoy of Russia on Syria, said that the Russian and Turkish aircraft, as aircraft of the coalition forces of the United States, will also be prohibited from flying in these zones.

However, Mr. Lavrentiev outlined for aviation the coalition forces of the United States a wider no-fly zone. He said that they could only fly in Eastern Syria, over areas held by militants of the “Islamic state”, excluding, therefore, all the Western parts of Syria.

Press Secretary of the Pentagon captain Jeff Davis (Jeff Davis) did not answer the question about whether the U.S. military to reckon with the limits of no-fly zones and whether they will promise not to fly in these areas.

The theme of no-fly zones has always caused a lot of controversy in the course of the Syrian conflict, which is now in its seventh year, the opposition groups are regularly asked to establish a no-fly zone, the Syrian government regularly them refused. The controversy over who can fly, is also likely to continue even after the entry into force of the new agreement.

However, one of the representatives of the Syrian opposition groups attending the talks, Colonel Ahmad berry (Ahmad Berri), in contrast to other opposition leaders sounded a more optimistic view, saying he expects a complete cessation of hostilities in the designated areas.

“This time Russians are more serious compared to the last time, we felt it,’ he said in a telephone interview. — The regime will comply with the terms of the agreement, because the Russians are the guarantors. If Russian told you to cease air strikes, the regime will cease to apply”.

On Friday evening, may 5, before the entry into force of the cease-fire, residents of the rebel-held areas regularly subjected to bomb attacks, went to parks, had a picnic and organized anti-government demonstrations.

In a statement issued on Wednesday evening, 3 may, representatives of the government of Syrian President Bashar al-Assad noted that the government “supports” the initiative on creation of zones of de-escalation, including the demand to stop the shelling in these areas.

However, in the same statement said that the Syrian military will continue the fight against banned terrorist groups like “Islamic state” and associated with “al-Qaeda” militants throughout Syria.

Opponents of the government took this statement as a signal that the Syrian army continues to bomb where deemed necessary, under the pretext of fighting with terrorists.

“The flights are terminated over these territories,” said Mr. Lawrence in an interview with reporters in Astana on Friday, may 5, the day after the signing of the agreement between Russia and Iran, which supports Syrian government and Turkey, which supports some opposition groups.

To the question about flights of coalition forces led by the United States, formed in 2014 to fight against the “Islamic state”, Lavrent’ev gave a clear and unequivocal answer: “the Work of aircraft, especially of the international coalition forces, is not provided absolutely. With notice or without notice, this question is now closed.”

He added that only may work where the international coalition aircraft, is the “Islamic state”, which are located in the area of Raqqa, the number of settlements in the district of the Euphrates, Deir ez-Zor and next in Iraq.

This area also includes the province of Idlib where American planes with increasing intensity was carried out air strikes on those officials are called agents of “al-Qaeda”. This area also includes some areas where Turkey, a member of NATO, fought against Kurdish groups who have the support of the United States.

This zone also includes areas where is a large part of military facilities of the Syrian government forces, such as air base “Shirt” on which the Americans launched a missile strike in response to chemical attacks in April, which killed many civilians in the rebel-held town of Khan Shaykhun in Idlib province.

Zone of de-escalation cover almost all the areas held by the rebels not affiliated to Islamic state: the first area includes Idlib and neighbouring districts of Latakia, Aleppo and Hama, the second zone extends along the southern border of Syria with Jordan, and the third covers the Eastern suburbs of Damascus, and the fourth — the Central province of HOMS.

In a sense all these debates are abstract in nature. The US never received from the government of Syria permission to conduct airstrikes against terrorists in Syrian territory. The Syrian government calls the strikes of the U.S. military violation of the sovereignty of the country.

Russia and the Syrian government quite freely interpreted the exceptions in previous agreements about the ceasefire, continuing to strike, including strikes, which has suffered the humanitarian services and hospitals and after which Moscow and Damascus have stated that in those areas there were terrorists.

Rebel groups also challenged the value of the requirements, according to which they had to disassociate themselves from the banned terrorist groups, saying that they have no opportunity to dislodge well-armed and receiving generous funding of extremists. But at the same time, some opposition groups have entered into tactical alliances with extremists.

However, the UN officials hope that a new agreement will be more successful than the previous agreements which fell under the pressure of these contradictions. According to American officials, they support the stated goals of this plan, but I doubt that Russia will be able to rein in the Syrian government, at the same time expressing his concern with the role of Iran.

From previous contracts this agreement is characterized by the fact that some countries are supporting different sides in the Syrian conflict, agreed at least on the ability to attract external forces to monitor the implementation of the terms of the cease-fire.

Wednesday, 3 may, Vladimir Putin said that the planes will not fly over the designated areas in the case if in these zones will not be noticed by military activity.

Opponents of the Syrian government stressed that the main demand of their supporters was the cessation of bombing throughout Syria. But in this agreement they saw something else, namely a pretext in order to ensure that attacks like the missile strike, President Donald trump, won’t happen again, or attempt to strengthen the political positions of Mr. Assad. According to them, the agreement is very similar to the agreement on the withdrawal of chemical weapons by the Syrian regime, which the U.S. and Russia signed in as an alternative to punitive strikes after a chemical attack 2013.

“This agreement reminds one of the agreement that allowed Russia to save Bashar in 2013. Now they’re trying to save him, by entering into such agreements,” said Hisham Marwa (Marwa Hisham), a member of the coalition of opposition forces.