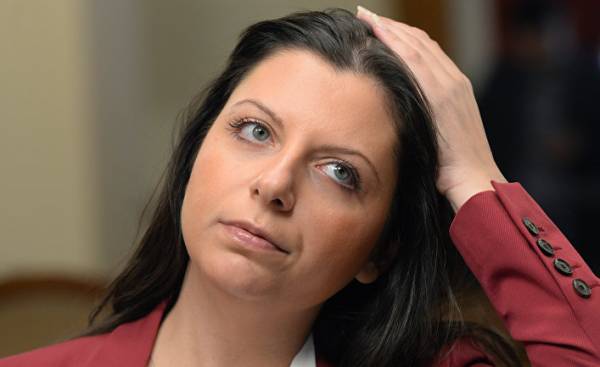 Russia Today Russia’s main international media, accused of spreading Kremlin propaganda in the world and the desire to influence the elections in France. His young editor in chief Margarita Simonyan protected, going on the offensive on “so-called free and democratic press” in the West.

Margarita Simonyan: If you count France 24 political project then Yes, Russia Today is a political project. Russia — not the first country that created a private channel for presenting to the world their point of view. Look at the statements of the French politicians during the launch of France 24: they claimed that the channel will reflect French views of the world. In BBC World has long stated that their goal is to bring the world of British values. Why France and Britain can do it, and Russia can not present its point of view to the world? What’s wrong here?

— You run Russia Today in the French language before the presidential election?

— While we have a website in French. We also plan to launch the channel on the French to reach the French audience. We do this at the end of the year. The project was delayed. Initially, I was standing in 2014, but the implementation had to be rescheduled because of the impact on our budget in connection with the collapse of the ruble. In any case, we never set a goal to begin broadcasting before the presidential elections in France. It’s a lie invented by the French journalists.

— Shortly before the presidential election in France was started several initiatives to combat fake news, fake news. You approve of it?

— It would have been great if they actually tried to fight fake news and not used them as a tool against us. In fact, we are dealing with pressure, not with the instrument of democratic transparency. The French press every day publishes fake news on Russia Today, Sputnik, Russia. And no one in Paris does not condemn this misinformation.

— We will not publish them. Believe me, like all media, we have a system of screening filters that allow you to not miss any false information. Sometimes, of course, there are mistakes, but with Russia Today this happens much less frequently than with CNN. As with any news Agency, we make mistakes sometimes. But why focus only on these mistakes and make them whole story, ignoring the daily directed against us misinformation? This approach can not be called fair and objective.

We regularly give comments and explanations to requesting the Western media, but they do not publish them. They only laugh at this, because the pursuit of your own purpose: they write about us what you were going to, regardless of the actual facts. We are disappointed with the attitude towards us of the Western press. Initially we thought you are objective and honest.

— Anyway, you have published false information about Emanuele the Macron (French correspondents in Moscow in t-shirts “go Forward!” the double life of Emmanuel Macron, and the costs of his trip to Lebanon)…

— That’s unthinkable! The article is about the French correspondents in Moscow in t-shirts of the movement “Forward!” based on the words of the representative of “Republicans” in Moscow. We’ve got an interview, and then talked about the events in French politics on the basis of what he told us. (In fact, the French correspondents did not go in t-shirts “go Forward!” — approx. ed.).

As for statements that Russia Today first wrote about the possible double life of Macron, this is not true. See for yourself that this said Nicolas Sarkozy, the French press, and his insinuations about Emmanuel Macron.

Finally, the visit of Emmanuel Macron in Lebanon, wrote about the French press, and we just picked it up. But your media, then presented the situation as if it was all us. Of fuss and other articles, but you mention only three of them. You chose them because they support your arguments. You and your colleagues asking me questions specifically about the three the news, as if someone had ordered you to ask these questions. Your task is to show your readers that Russia Today and Sputnik vs Emmanuel Macron, although we only repeat what said by the French press.

— Did Russia Today for the 12 years of its existence to change the image of Russia abroad?

— Our goal has never been to change the image of Russia abroad. Our task is to tell the world what he does not say. After all, what I was saying, your so-called free and democratic press, your country calmly bombed Iraq and Libya, and nobody said anything against it. The fact that your public opinion listens to and supports the security services, not calling anything into question.

Look how US tried to convince people of the need for war in Iraq: the case of the American government and the press were the real fake news. The entire Western press says the same thing. The world needs another point of view. The world needs other voices.