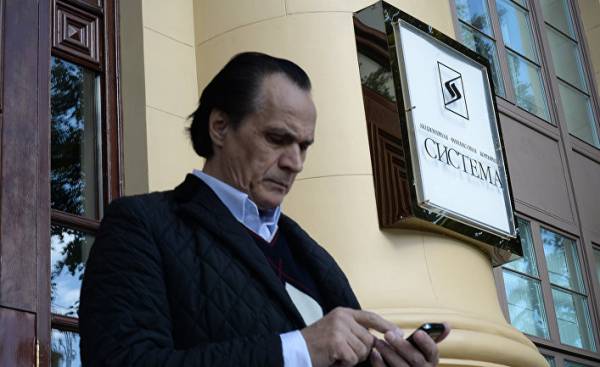 Dollar bonds of JSC AFK Sistema, Russian billionaire Vladimir Yevtushenkov was trading with a record low yield for the day before the state-owned oil company OJSC Rosneft filed a lawsuit against her for that amount (more than 106,6 billion). The news of the lawsuit triggered a correction in interest rates on bonds by 150 basis points and as a result, the yield soared to its highest level in 11 months.

Investors who are not satisfied with near-zero interest rates in developed countries are willing to accept the lower income from securities of Russian companies whose bonds are considered among the safest in the emerging markets. A lawsuit against AFK Sistema, according to analysts at Citigroup Inc., serves as a reminder of the risks, and if the Russian corporate history of the past time can serve as some reference point, company can become the subject of the struggle for the acquisition of her property.

The shock caused the claim to “the System” in the amount equivalent to approximately 75% of its market capitalization, may lead to an increase in borrowing costs for Russian issuers by 15-20 basis points, said a senior investment Manager Privatfonds GmbH in Frankfurt, Sergey Dergachev, who is involved in managing the assets of about $ 14 billion. According to the index Bank of America Merrill Lynch, the yield on Russian corporate dollar bonds fell on 28 April to a record high of 3.56%.

“This news, hopefully, should lead to gradual growth (yield) and provide a prize for the new releases to compensate for risks in the Russian market, Dergachev wrote in the email. — Spreads on the latest editions were pretty narrow”.

The demand for the debut issue dollar-denominated bonds of the United company RUSAL in January exceeded the volume of supply by more than two times, allowing the aluminum manufacturer to post bond at the level of 5,125% below the initial benchmark, amounting to 5.375%. In March and April entered the market of non-state creditors. At the same time as “Alfa-Bank” and “credit Bank of Moscow” to sell the bonds at a level below their price targets.

High demand among foreign investors due to low offers from many state borrowers, who because of the sanctions still cut off from international financial markets means that Russian companies can get out of the situation, “placing a large number of papers on the more expensive levels,” he said in an interview last week, the head of bonds of emerging markets at Pioneer Investment Management Yerlan Syzdykov.

Rosneft, headed by an ally of President Vladimir Putin Igor Sechin, currently controls the company “Bashneft” after in October it acquired more than 50% of the shares of the company owned by the state. According to the newspaper “Kommersant”, the size of the claim is composed of a number of alleged losses of “Bashneft” at a time when it was owned by AFK “System”.

AFK Sistema has transferred its unit — oil company, OAO Bashneft in the property to the state in 2014 as part of the case on the earlier of the company’s privatization, after which the charges of money laundering with Yevtushenkov was charged.

“This event is significant not only because of the size of the claim but also considering the historical context, wrote in the official letter sent to customers by e-mail, analysts at Citigroup, among whom were Vavruska Dalibor (Dalibor Vavruska). Similar lawsuits against large companies are often associated with more ambitious plans, including a change in the asset management system”.