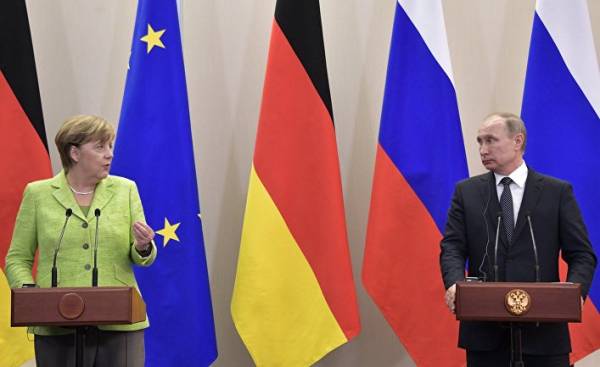 The President of Russia Vladimir Putin held a telephone conversation with his us counterpart Donald trump. Talked about Syria and North Korea, the topic of Ukraine, according to official data, is not affected. The Kremlin said the conversation was “businesslike and constructive”, while trump described it as “very good”. Thus, although Russia is counting on the meeting of the two leaders on the sidelines of the G20 summit in Hamburg, to be held 7-8 July, according to The Wall Street Journal, specific arrangements for such meeting during a conversation has not been reached. Why the President of the Russian Federation and the United States had not discussed Ukraine, and why the Kremlin is in a hurry with the meeting of Putin and trump’s, “Apostrophe” says the Deputy editor of the Foreign Affairs Chronicles Dmitry Galkin.

For the Russian leadership a future meeting of Vladimir Putin and Donald trump has a strategic importance. And, of course, will be supported by the opinion that this meeting will be held, until recently, efforts will be made to arrange a session.

Putin is extremely important to show that the US is somehow cooperating, restore relations with Russia that has prospects of lifting the sanctions and political cooperation. That is why, in conversation, probably, was not raised the subject of Ukraine. This is a topic, which is now the United States and Russia is fundamentally unable to agree, without abandoning their positions. For Putin the issue of Ukraine is of great political importance. For trump, she is not political interest. The only reasonable solution in this situation — do not bring this up in conversation with trump. The more that the American administration is also convenient that this topic was mainly covered through the European politicians.

Working in this regard Merkel, who led the negotiations on Ukraine (during the meeting with Putin in Sochi on may 2 — “the Apostrophe”). Not that the US would delegate some authority to the decision of the Ukrainian question, for US it is important to take the same position. I don’t think they will abandon their positions in order to somehow alleviate the situation in Germany. Moreover, for Germany the question of the transatlantic unity is more important than the restoration of relations with Russia. Therefore, I do not think that the position Merkel will be very different from the American one. After Merkel’s visit it is obvious that its position is hard enough.

As for Syria, for Russia the issue is also very complex. The United States will not consider Russia as an ally and to cooperate in military and political relations with Russia as long as it is not clearly distanciruemsa from the Assad regime. While the part of the Russian Federation are only visible some hints of the possibility of such a step. But for US this is not enough, they want Russia clearly distanced himself and as possible, oppose Iran in this matter. In the current situation, Russia can not go, so I do not see at present any prospect of conflict resolution around Syria.

A more convenient platform for interaction for Russia now is North Korea. Moreover, there is a certain position of China, which stands for political pressure on the North Korean regime without the use of any military means. And, as this position is placed in the tactics of the us administration, Russia could join it. Here and Trump it would be convenient to say that there is some understanding. And Russia it is good to show that in such an important matter as the DPRK, there is a convergence. This is the only point on which the US and Russia cooperation.