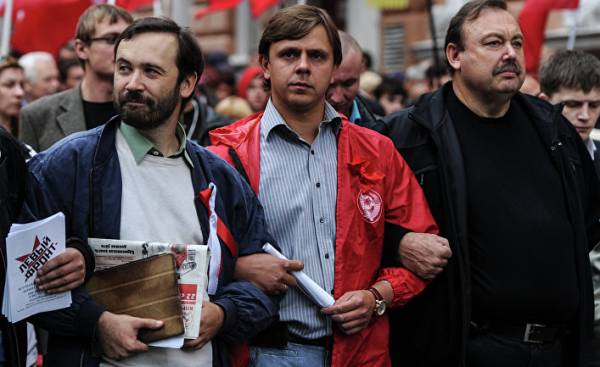 In the capital of Ukraine is at least 2 thousand Russian citizens who were forced to leave their homeland for various reasons, that dream of Russia without Putin.

“It is Russian and no one else should “depotentiate” Russia. But many opposition members, like me, was forced to leave the country. Ukraine is a good platform to continue the struggle.” In 2014 Ilya Ponomarev was the only Deputy of the state Duma refused to vote for the annexation of Crimea. Because of the political pressure he was forced to leave the country in 2015 and now lives in Kiev. “Geographical and cultural proximity between Ukraine and Russia is of great importance. War intensifies the symbolic importance of Kiev. Here have a lot to do.”

Since 2014 at least 2 thousand Russian citizens found asylum in Ukraine. Kiev does not require entry visas for Russian citizens. This group of people is heterogeneous. Here you can meet the volunteers fighting in the ranks of the Ukrainian army, and people involved in different sectors of activity, who fled from persecution in their country. They all share the opposition to the Putin regime and the wave of change has begun “revolution of dignity”. “We are not so naive. Independence did not restrain their revolutionary promises,” analyzes Olga Kurnosova, a former ally of slain opposition leader Boris Nemtsov. “Nevertheless, we are impressed by how the Ukrainians were able to get rid of the corrupt and authoritarian regime. There is a lot to learn”.

In one of the Sunny Saturdays of April, Ilya Ponomarev and Olga Kurnosova meet Vedrina Olivier (Olivier Védrine) in one of the suburban districts of Kiev. This Frenchman living in the capital of Ukraine, believes that “Europe cannot exist without a free Russia.” He held meetings of the opposition. During the meeting, Kurnosova watching a video about the Moscow protests on his phone. She had not been in Russia since October 2014 after his escape on the night train to Belarus.

These meetings on the weekends are becoming more similar to meetings in the analytical clubs with the beginnings of forming a government in exile. To overthrow the tyrant Putin with a broad civil Union, to radically change the system, to build a new Russia in the slogans there is no shortage. The opposition claimed that one of the first steps of the new regime will be the return of Crimea to Ukraine and ending the war in the Donbass. This is different from the main Russian opposition, who do not take such clear commitments. Cheerful atmosphere of the meeting was overshadowed by the call to Ilya Ponomarev, the General Prosecutor’s office in connection with the investigation into the murder of Denis Boronenkov. The former Deputy of Duma in exile was killed on 23 March in the center of Kiev. Though since Ilya Ponomarev is accompanied by two bodyguards, it is difficult to consider the murder Boronenkov, as a warning for the opposition. Denis Voronenkov was more of a deserter than a dissident.

The way Ilya Ponomarev has its dark side and accept it, not all Russian in Kiev. The former MP was not invited to the opening of the House of free Russia on April 13. Conceived as an “alternative Embassy of the Russian civil society in Ukraine,” the House will work as a refugee centre and also as a platform for cooperation of opposition forces. “The Russians living here to understand the problem of transition to democracy in Ukraine”, — says Grigory Frolov, co-founder of the House. “They understand very well what is happening in Russia. Many of us have ties to the West, which opens up great opportunities for us”.

Another problem is to establish links between Russian and Ukrainians. “They don’t know what the situation in 2014 and draw conclusions on the basis of a crude stereotype,” says Vladislav Davidson, editor of the Odessa Review. “The majority of Ukrainians reject everything that is connected with Russia”, — says the journalist Ekaterina Sergatskova, received in 2015 Ukrainian citizenship. The opening of the House of free Russia has caused a wave of criticism and threats in social networks. “Many Russians are denied asylum for not always obvious reasons. Despite the fact that it is obvious they are taking a big risk returning home,” continues Catherine.

In addition to individual cases, there is an obvious tendency to break all relations with Russia. This happens by the trade embargo, the suspension of direct flights and the recent closure of the Russian opposition channel “Dozhd”. In addition, the government is very closely monitoring popular social networks such as “Vkontakte” or “Classmates”, Facebook and analogues “Old friends”. This is justified by fight against Russian propaganda. “But before all these steps are aimed at breaking ties between people, with serious consequences for the population”, — said Grigory Frolov. “One of our main goals, aside from trying to change the situation in Moscow is the restoration of dialogue with the Ukrainians. Despite the current circumstances, I want to believe that we will work together to build our common future”.