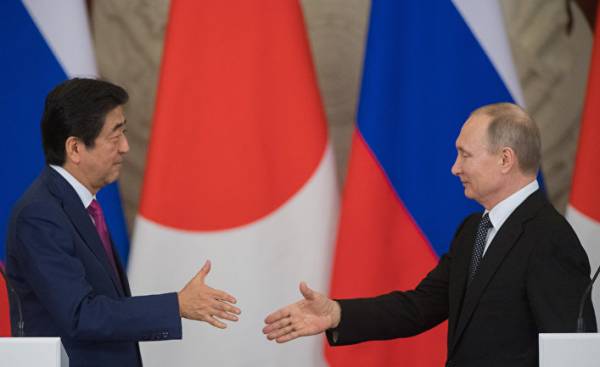 During the meeting in Moscow on 27 April, Prime Minister Abe and President Putin agreed to compile a list of preferred projects for joint economic activities on the “Northern territories”. The purpose of the Japanese side is to prepare the conditions for the solution of territorial problems through the development of the coexistence of the “Northern territories”, including an increase in the number of trips the indigenous inhabitants of the Islands on the graves of their ancestors. However, during a joint press conference, President Putin is almost not touched upon the signing of the peace Treaty. Thus, he stressed that the priority is given to economic cooperation. The confrontation between Russia and the United States on the issue of North Korea, and Syria also casts a shadow over Russian-Japanese relations.

Meeting of heads of Russia and Japan was 17. She was scheduled for 14 hours, but started about 30 minutes late.

In the beginning of the meeting President Putin said: “Japan is a friendly neighbor. It is a promising partner.” The Russian leader added: “During the last meeting we came to an agreement to intensify bilateral relations and contacts. The progressive movement is. I hope that through our joint efforts, this meeting will be the next step.”

President Putin is positioning the joint economic activity as part of economic cooperation, which will lead to the development of the Russian economy. Contrast to the positions of Prime Minister Abe, who has positioned the joint activity as a training environment for resolving the territorial problems emerged during the joint press conference held after the meeting.

Most of his statements President Putin has been devoted to assessing the development of economic cooperation in the far East and in other regions.

In turn, Prime Minister Abe said that the parties had reached an agreement on the concretization of joint economic activities on the “Northern territories”, as well as increasing the number of trips the indigenous inhabitants of the Islands on the graves of their ancestors. “You can start small and gradually improving this cooperation, which will lead to maximal activation of joint economic activities. At the end of our efforts is the peace Treaty, which seeks to Vladimir and I,” said Abe. He stressed that the goal of economic cooperation is the signing of a peace agreement.

Prime Minister Abe attaches special importance to personal relations of trust with President Putin. In a statement to journalists, the Japanese leader said: “Together with Vladimir I want to go towards a peace agreement”.

Nevertheless, even if it is to develop coexistence on the four Northern Islands, this does not mean that soon will be settled the territorial issue. The Russian side has serious concerns about a special system, which insists Japan and which must not hurt the legitimate positions of both sides. The Kremlin does not want people to think that he has made concessions on the territorial issue.

These are presidential elections in Russia to be held in March next year. A source in the Japanese foreign Ministry said: “I think it will be difficult to decide on the areas during the period when elections are held”.

The situation in North Korea casts a shadow

Escalating the situation around the DPRK have seriously affected the Russian-Japanese summit.

The leaders of Russia and Japan agreed that it is necessary to influence the DPRK continues to conduct nuclear and missile development, so that it followed the resolutions of the UN Security Council and refused from further provocative actions. However, during the press conference, President Putin said: “we Must not fall into the rhetoric and quietly to continue the dialogue. It is also necessary to resume the six-party talks on the nuclear issue of the DPRK.” Thus, he made a lunge towards Japan and the United States, which increase the military pressure on the DPRK.

As for the Japanese government, it intends to continue to exert pressure on the DPRK together with the United States and South Korea and to attract the cooperation of Russia and China, which has influence on Pyongyang. On 25 April in Tokyo, representatives of Japan, USA and South Korea in six-party talks on the DPRK nuclear issue and agreed to demand from Russia that it has worked on the DPRK.

Professor, Institute of East Anatoly Koshkin said: “In the face of rising tensions on the Korean Peninsula, there are no prerequisites for Russia and Japan moved from the dead point of the territorial problem.”

Last year, Russia launched the “Northern territories” the newest missile systems. Commenting on this fact, the Director of the Institute for the study of security problems of Eurasia Vyacheslav Zimonin said: “Japan, the US and South Korea building up military power, and Russia is responding to these steps.” Negotiations on the problem of “Northern territories” are closely linked with the issue of security in the far East and Asia, so the path to a settlement will be difficult.

Between Russia and the US are also ongoing confrontation on the Syrian and Ukrainian issues. The Japanese side feels the distrust in the diplomatic position of Russia. During the press conference Prime Minister Abe said: “Various international issues including the situation in Syria and the fight against terrorism can not be solved, if Russia will not play a constructive role. We carefully and openly discussed how Russia and Japan should develop cooperation in the world community”. That is, he noted that some differences still remained.