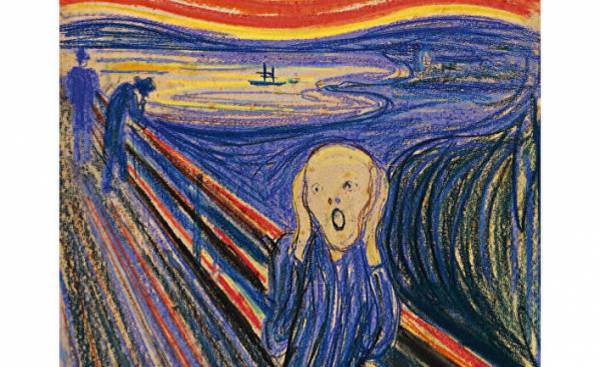 “I went with a couple friends down the street — the sun was setting. Suddenly the sky turned blood red, and I felt a thrill of longing. Oppressive pain in the chest”. So the Norwegian artist Edvard Munch described the state that was passed in the famous painting “the Scream”.

“I stopped, leaned against the fence, because I feel dead tired. Above the blue-black fjord and the city broke the bloody flames. My friends went ahead while I remained behind, shivering with fear. And I felt a powerful infinite scream pervading nature.”

Handed then Munch, according to the critics, its internal state through his painting? Fear of life or death? It was the “Scream” expression of a state of mind? Or there were external reasons for the creation of the work?

For a long time meteorologists believe they could really be. “The scream” by Munch may have been inspired by heaven as a giant cloud of ash, which, in 1883, distributed all over the world, the volcano Krakatau in Indonesia, made sunlight for several years glimmering reddish undertones. So the artist could really see the sky with your “bloody flames”.

However, the eruption occurred nine years before Munch presumably painted. And yet another point not quite fit into the theory of the volcano painted the sky: Munch painted a dramatic red waves — the particles of ash to the border with outer space, but the shimmering in the sunset like a smooth reddish tape.

Now meteorologists presented a new explanation: a special kind of clouds painted the sky over Oslo and so deeply impressed Munch. The Norwegian group of researchers reports that mother-of-pearl clouds can sometimes appear only in winter at high latitudes at an altitude of about 20 kilometers, and they are like heavenly wave, depicted by Munch.

Fright Munch more logical to explain the mother-of-pearl clouds, said Helen Muri (Helene Muri) from the University of Oslo at the annual meeting of the European Union of Geosciences (EGU) in Vienna, which on Monday presented the results of the work of the research group of her colleagues Ficke sweyn (Svein Fikke).

Volcanic sky, Muri explains, it was not unusual at that time, the veil of ash after the eruption of the volcano was kept for about two years. Mother-of-pearl clouds, on the contrary, most of the people in my life never seen so rarely this phenomenon. Accordingly, they could have made such a strong impression on Munch; the researchers called them “loud clouds”.

Nacreous clouds occur when the light is just coming or rising of the sun illuminates the thin veil of fine crystals high in the sky. After about half an hour after sunset and sunrise, the sparkle quenched of either the night or the sun in the sky outshines nacreous clouds and they become invisible.

Crystal curtains are formed only in winter, in severe frosts, when the updrafts raise small droplets in the stratosphere, where they freeze. Such streams often arise in the mountains. However, there often are formed and the usual clouds that obstruct the view of the mother-of-pearl clouds.

The new theory could make a splash, as shown by the surprise of one journalist at the meeting of the European Union of Sciences about the Earth: “Why, — she said sharply Muri, you need to make this question even more of a mess?”

The researcher calmly replied, “It’s our job to ask questions”. Experts in the art or psychologists, of course, can find their own interpretation of the famous painting. As scientists involved in natural Sciences, they hit those amazing coincidences between nature and art, added Muri.