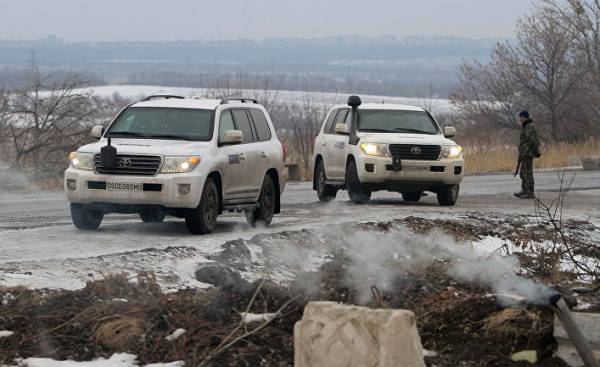 As expected, after the death of an American observer of mission of OSCE Kiev immediately laid the blame on DPR, LPR and Russia (we are talking about the latest ravings Turchinov, who this time has even brought Russian officers), and urged the United States to send an armed mission in the Donbass.

This is written Kiev before the incident the script was so predictable that one can predict the continuation was not work. The body of the observer has not yet managed to pass the OSCE (this happened Monday), as the Kiev authorities tried to use his death to get military aid, without which Ukraine can not expect to win in the Donbass. In addition, the Finance Minister acknowledged that Ukraine, much more is required of US is not financial assistance, and military support and the retention of anti-Russian sanctions. This is clearly stated.

If you think about who benefits from all this crime, it is easy to imagine who in the first place could stand for such a provocation.

About the DNI and the LNR said on Sunday. In particular, Alexander Zakharchenko said the following:

“We always talked about the fact that the safety of mission personnel is one of our priorities. However, we do not have the power to prevent the aggressive actions of the Ukrainian side.

I have repeatedly said that since the defeat in the first military campaign of Kiev tried to drag into our conflict a third force, that is, foreigners. Whether it is peacekeepers or international police force. The vtaskivaniya in the conflict a third force had Kiev not to stop the conflict, but in order to be able to arrange provocations on the international level. From the beginning, the plan of Kiev was a variant of attacks against foreigners on our territory or in the area of the demarcation line.

To drag a third force failed and Kiev struck a blow for the foreigners from the OSCE mission. Unfortunately, the provocation Ukrainian side managed.

The fact that this is a provocation by Kiev, confirmed the attack, which the Ukrainian side exposing the site of the explosion of the car of the OSCE mission. As in the case of the downed Boeing Ukrainian side, Kiev is trying with attacks to make inaccessible the scene of his crime.

However, I am sure that our colleagues in Luhansk, with the support of the OSCE mission will hold, despite the opposition from the Ukrainian side, an objective investigation and prove to the world that the deaths of members of the OSCE is to blame Kiev.

For my part I can add that we under no circumstances not beneficial to the detriment of the OSCE mission, which, though a little, but holds back the aggression of Kiev against Donbass.

We are ready to take additional measures to ensure the safety of OSCE mission members, and we hope that the international community in General and the “Norman four” in particular will exert pressure on Kiev and force it to stop provocation against the OSCE mission and against the Donbass”.

Russia in the person of foreign Minister Sergei Lavrov called as soon as possible to conduct an independent investigation of the incident with the car of the OSCE, which definitely hit an anti-tank mine. Moscow invited OSCE and the Minsk group to cooperate with the authorities LNR for the effective conduct of the investigation, whereas the EU chose to distance himself and refused to take part in it.

As we have seen with the Crimean referendum, instead, to participate and to recognize the correct organization of events, it is much easier to dismiss and then to criticize, to talk about the lack of independent investigation and to blame Russia with the people’s Republic of all the troubles (as it enters Kiev).

“The U.S. once again urged Russia to use influence on separatists to make the first step towards peace in Eastern Ukraine and provide tangible, affirm and improve security.”

You’d think that peace in the Donbass not depends first of all from Kiev, who is the aggressor and continues night and day to fire at civilians… When I hear such nonsense, I want to pinch myself to check that I do not sleep. In addition, Russia is diplomatically replied that the DNR does not need to be pushed Moscow, which, moreover, addressed only recommendations, and the authorities did everything necessary.

After another proposal of Ukraine to the arms of OSCE observers in the Donbas, Deputy head of mission Arne Dalhaug (Arne Dalhaug) stated that there was no reason, because the weapon will not save you from mortar shells or mines. Finally, a little common sense.

As for the UN peacekeeping mission, which said Poroshenko with Rex Tillerson, Russia reminded that this is impossible without the consent of the DNI and LC, and they consistently oppose it (in the republics have not forgotten what happened in the former Yugoslavia and several African countries where they were deployed similar missions).

If to speak about the investigation, appearing Sunday facts confirm the suspicions expressed in the LC the day of the accident. So, after a careful examination of the blast machine of the OSCE militia observation post detected Ukrainian reconnaissance and sabotage detachment, and sappers found on the road two anti-tank mines TM-62 and trap fragmentation grenade RGD-5.

On Monday, the Ukrainian subversive group was expelled from the vicinity of the village of Sokolniki, which is located less than three kilometers from the blast site. She was discovered in an abandoned building after refusing to lay down their arms, retreated to the Crimea (located on Ukrainian-held territory) under the cover of grenade launchers and heavy machine guns (one Ukrainian soldier was injured during the escape).

In addition, there still remains unanswered the following question: why is the OSCE mission decided to go for this secondary dirt road, then as agreed with the LC route ran on paved road safe?

This minor road passes closer to the positions of the national militia, and, as admitted by himself, the Deputy head of the OSCE mission Alexander hug (Alexander Hug) on Sunday evening, patrols of the organization not just driving through it, although it is much more dangerous than the primary route of Slavyanoserbsk in Sokolniki.

The OSCE should coordinate their plans with the militia for the safety of the observers: soldiers inspect the road to ensure that there it mines and traps.

Why was it necessary to put myself in danger? Why do you need to pull off the main road and safe on a potentially risky path (people’s militia warned the OSCE about the presence and activity of the Ukrainian subversive groups in the area)?

Given that many openly suspect OSCE spying on Kiev, the incident sheds light on a few strange methods of work of the “neutral and impartial observers.”