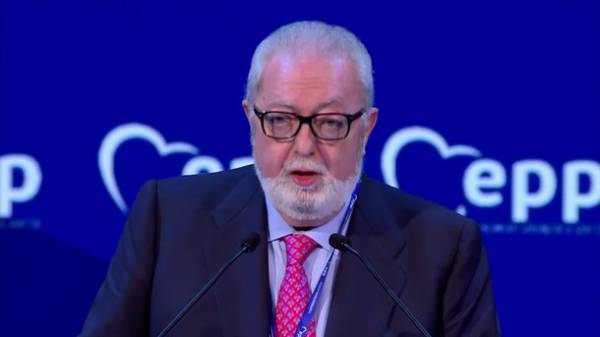 The scandal around the President of the parliamentary Assembly of the Council of Europe (PACE) Pedro Agramunt does not subside. For the visit to Syria by the delegation of deputies of the state Duma of Russia and PACE around him, Agramunt threatened to resign. So, the governing body of the Assembly – PACE Bureau by an absolute majority of votes expressed his lack of confidence and refused permission to perform work on behalf of PACE. At the same time he Agramunt on the meeting of the Bureau did not come, and the resignation did not write, said the people’s Deputy, head of the Ukrainian delegation to PACE Vladimir Aryev.

“The PACE President Agramunt did not write a resignation, did not appear at the Bureau and, accordingly, have not made any statements previously promised. The Bureau of the Assembly that only an absolute majority of votes expressed his disbelief and denied the permission to carry out visits, to make statements and to carry out other activity on behalf of PACE. That is, from the powers of the President the PACE of Agramunt, in fact, there was one name,” said Aryev in Facebook.

At the same time, the Aryans emphasized that the procedural Committee of PACE will have to develop a recall procedure of the President. To date such a mechanism in the Assembly there.

Why Ukraine is fighting for the resignation of Agramunt

Ukraine has long expressed serious complaint against Pedro Agramunt, and now his trip to Syria was the “last straw” that led to the fact that the Ukrainian position was supported by many other delegations. This “Today” said political analyst Volodymyr Fesenko.

“The Ukrainian delegation has played one of the most important roles in this story. The Ukrainian side had expressed serious critical complaint against Agramunt. And after the story with a trip to Syria, which has become controversial, especially against the Syrian attack in Idlib (chemical attack, which killed nearly 100 people – Ed.) the Ukrainian side has been at the forefront among those who most actively demanded the resignation of Agramunt“–said the analyst.

According to the expert of the Ukrainian Institute of policy analysis and management Mr Will, this situation began last year, when the PACE has intensified the debate about the possibility of returning of the Russian delegation to participate in meetings of the Assembly. Recall that in 2014 and partly in 2015, Russia was deprived of voting rights in PACE due to the annexation of Crimea and the outbreak of hostilities in the Donbass. In protest, Russia has suspended all contacts with PACE until the end of 2015, while in 2016 and 2017 refused to confirm his authority in the Assembly. The head of PACE Pedro Agramunt was one of the main supporters of the Russian delegation returned to participate in the meetings.

“PACE is one of the few areas where Ukraine can more or less effectively defend their position, where we have good works and our mission and the delegation of the PACE”, – told the “Today” expert of the Institute of social and economic research, Mykola Kapitonenko.

The expert stressed that the circumstances were such that the Pro-Russian position of Agramunt coincided with the events in Syria, therefore, Ukraine has got a reason, to show that this position is weak from the moral point of view.

“Given the specificity of this organization that it is engaged primarily in humanitarian issues, human rights, the natural that occurred in Syria hits hard on the positions of those who, by whatever way, willing or unwilling, but expressed support for Russia’s actions in Syria. For us this created a unique opportunity that we use,” said Kapitonenko.

At the same time, the expert notes that, if Agramunt will retire, it doesn’t turn of PACE nor Pro-Ukrainian or anti-Russian.

“This is the man who created problems for all of the PACE, and for us this was unacceptable not only because of the Pro-Russian position of Agramunt. It’s in the first place, of course, but the second problem for us is PACE very important institution from the point of view of the formation of international public opinion in exerting pressure on Russia”, – said political analyst Volodymyr Fesenko.

The expert notes that, though this institution may not accept economic sanctions, but as it involves all European countries and some Asian countries, it is a platform from which to exert pressure on Russia. For Ukraine it is important to maintain the relevance and viability of the PACE, because if this institution is blocked, or discredited, this important area of pressure on Russia will be lost.

However, an expert on international Affairs Vladimir Will believe otherwise. In his opinion, PACE is the political platform for applications, but no more.

“PACE is just a political debating club, composed of deputies from those States that are members of this political club. PACE does not accept any binding decisions,” he says.

In this case, said Will, that the deputies-members of the Ukrainian delegation, on the one hand, do make Agramunt was removed from the presidency of the Assembly, but on the other, they are engaged in political PR, is designed for Ukrainian consumers.

Expert: resignation of the President of PACE – matter of time

According to members of the Ukrainian delegation to PACE, Agramunt promised on Friday, April 28, to make a statement regarding his status, but he did not. According to political analyst Volodymyr Fesenko, he’s stalling, not wanting to leave his post, although his departure is a matter of time.

“I think that the issue of resignation of Agramunt is a matter of time. Because it is not a question about Agramunt, a question of reputation PACE itself. The person who has run into such scandal, which has caused so much conflict within delegations, can ensure the normal work of the Institute. Therefore, it will have to change,” – said Fesenko.

The expert suggests that the current PACE President will retire in the near future. Thus, the only way by which he may leave his post – voluntary resignation. If Agramunt will not leave his post, it is normal to work neither he nor the PACE.

Thus, according to Mr willing, to argue whether to leave Agramunt voluntarily or not, is now difficult – it may be that he will go to the end. Meanwhile, already defined in the candidacy of his successor. According to experts, the next PACE President will become Vice-President of the Assembly, member of the German delegation Axel Fischer.
Thus, according to an expert on international Affairs Vladimir Will Ukraine do not win.

“Might just be the new President, the representative from Germany, from the European people’s party, will be less chat with Russian deputies, and no more, – he considers, – If Agramunt accused that he were with Russian Parliament members and openly stated that we need to find a way to return the Russian delegation, the German representative would not make such statements. And that’s all, nothing more”.

At the same time, as noted Mykola Kapitonenko, who would have replaced the current Chairman of the PACE in his post, for Ukraine it will be a victory.

“Judging by the fact that said Agramunt, any option for us to be better than him,” he said.

We will remind, at the end of March in Syria, a delegation of the PACE deputies and the state Duma of Russia headed by President of the Assembly, Pedro Agramunt, despite the fact that Agramunt was not authorized by the Assembly or its bodies in the exercise of such a visit. This visit was the reason for such a large-scale scandal.

He Agramunt in written comments to members of the PACE Bureau stated that it was his private visit, not connected with the work at the head of the PACE, but acknowledged that would have to inform about the intentions of other political groups.

In his opinion, the problem was the fact that “the visit has become a subject of manipulation by some Russian media”, which are not reported private nature of the visit and created the impression that he supports Assad; Agramunt assured that it is not.

However, in the explanations of the President of PACE there are a number of obvious manipulations. In particular, he said that his trip was financed by the Syrian Parliament; however, there is a video of how Agramunt down the ramp of the Ministry of defense of the Russian Federation, who arrived in Damascus from Moscow.

Noteworthy is the fact that the purpose of the trip Agramunt called the desire to see the aftermath of the tragedy in Aleppo, but then he acknowledged that in Aleppo he did not go, unlike other members of the delegation.