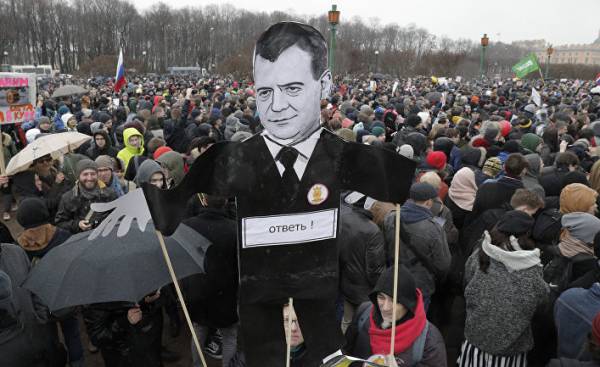 In the past Vladimir Putin has twice suddenly dismissed Prime Ministers before the presidential election to affect the election results. It seemed that Dmitry Medvedev, occupying the post longer than any of his predecessors since the coming of Putin to power in 2000, will be no exception and may even hope to someday be the successor to Putin. But now Medvedev rating drops amid allegations of corruption that have generated the largest in recent years, the anti-Kremlin protests. As a result, the President can get ahead of elections and that of the Prime Minister.

According to two allies Medvedev, now the Prime Minister is worried about his political future more than ever so far. The other two close to the Kremlin source, reported that closer to the upcoming March 2018 presidential election Medvedev might become more vulnerable. Its rating, already low due to two years of recession, has fallen 10 percentage points since the March of a corruption scandal. According to the survey, published on 5 April by the independent Levada Center, it is now a record low — only 42%. Meanwhile, Putin remains extremely popular, and his rating is 82%.

Getting rid of the unpopular Prime Minister looks the obvious solution. Almost a guaranteed victory for Putin in next year will mean that his reign will become the longest since the days of Stalin. It is unlikely to contribute to the enthusiasm of the voters. Accordingly, change the second number is capable of creating the impression that Putin was going to give his government a new life, and should increase voter turnout, perturbed the longest in two decades of economic downturn.

However, the resignation Medvedev may also encourage opponents of Putin. Mainly we are talking about the activist and lawyer Alexei Navalny, at the beginning of March released a documentary in which he blamed Medvedev to purchase expensive real estate in Russia and Italy. As stated in the film, it had spent $ 1 billion, derived close to Medvedev entrepreneurs through fake charities. Putin cannot dismiss Medvedev, “not having made a gift of the Bulk,” says Gleb Pavlovsky, a former 2011 Advisor of the Kremlin.

Bulk video, which was viewed on YouTube nearly 20 million times, was the cause of protests that swept the country on March 26. More than 80 cities on the street is believed to have left 60,000 people. Some of them in mockery of Medvedev were carrying sneakers and rubber ducks, hinting at the passion of the Prime Minister to expensive athletic shoes, and house for the ducks allegedly adorning a pond in one of his estates. According to two sources familiar with the thinking of the Kremlin, the scale of rallies and active participation in them, students become Putin unpleasant surprise. However, others close to the authorities, the sources deny that the events caused alarm among the country’s leadership. “Ratingi rise and fall is a normal process,” he says about the falling popularity of Medvedev, Putin’s press Secretary Dmitry Peskov. However, he refused to answer the question of whether the Prime Minister remains full trust Putin. This week, another poll by the Levada Center showed that 45 of the respondents would approve the resignation of Medvedev and only 33% would be against it (the rest undecided). “The Prime Minister did not give special value to data of opinion polls, especially conducted by the Levada Center, a well-defined political order,” said in response, Medvedev’s press Secretary Natalya Timakova.
Medvedev is now 51 years old. From 2008 to 2012 he was President of Russia. Putin at this time was Prime Ministers to circumvent the constitutional limit on the number of presidential terms. At the time, Medvedev was considered a potential reformer. As a former practicing lawyer, he advocated the rule of law and protection of private business. In 2008, he said that “freedom is better than unfreedom” — and in Russia it sounded almost revolutionary. He also promoted the strengthening of ties with the West and the modernization of heavily oil-dependent Russian economy.

In 2010, during his visit to the United States, Medvedev visited the headquarters of Apple and tried to improve relations with Barack Obama, have treated his burgers in Arlington and set up in a “reset” of relations with Moscow. Putin, however, did not allow Medvedev — even in office — to change the system of Kremlin domination. When, in 2011, Medvedev agreed (according to some information, not too eager) to step aside so Putin could next year return to the presidency, his allies in the country and abroad, finally ceased to believe in it. Medvedev’s flirtation with the West ended in 2014 when Putin’s annexation of Crimea and covert military intervention in Ukraine led to the worst confrontation since the cold war.

Medvedev has never ceased to be perceived as a “Robin in the Putin-Batman” — it described their relationship, WikiLeaks published American diplomatic dispatch 2008. “Medvedev’s think much more gentle and liberal figure than Putin, and therefore in the eyes of most people, considering the main maintaining order in the country, he looks weaker,” — says the Deputy Director of the Levada Center Alexei Grazhdankin. The personality of Medvedev as the Prime Minister has not made a significant imprint on policy. In addition, it is famous for its lack of political sensitivity. Speaking last year in the Crimea, he shrugged off pensioners who have complained that their pensions are not indexed to rising inflation, saying: “there’s no Money but you stay here.” This phrase immediately spread on the Russian Internet and even got into a humorous television program.

Medvedev’s allies believe that his problems are to blame for the Kremlin’s political opponents associated with the secret services, and in particular 56-year-old Igor Sechin, the powerful head of the giant oil company Rosneft. Medvedev and Sechin worked as Putin back in the 1990s when he was Deputy mayor of St. Petersburg. Sechin is in favour of the predominance of the state in the economy and is struggling with Medvedev and his fellow technocrats advocating a more free market. In 2016, Medvedev tried to prevent Rosneft to buy to compete with her company of smaller size, which is also controlled by the state, but in the end, Putin was supported by Sechin.

To the President, many worry that if Putin something happens, the Constitution will take its place Medvedev. Of course, Putin, who, by all indications, is doing well, right now nothing will happen. However, those who feared that, being the head of the country, Medvedev will take revenge, you still put pressure on the President, seeking the dismissal of Medvedev, says political Advisor to the Putin administration Sergey Markov. However, it is believed that there is a kind of an informal agreement stipulating that Medvedev will retain his post at least until 2018. “Medvedev Teflon — says Markov. — It can withstand any number of blows. I think he will survive”.

Most likely, the decision on Medvedev and Putin will only accept closer to the election, because “if you take this step too early, it will not be effective,” says Alexei Chesnakov, a former senior Kremlin official, who continue to advise the government. The dismissal of Medvedev might become a real prospect, “if the election campaign will need to brighten up”.

This is a convenient Medvedev to Putin as a “lightning rod” for discontent, allowing the President to remain above the fray, says political analyst Andrei Kolyadin, who earlier occupied a high post in the Bush administration. Sending Medvedev to resign, Putin “can be under fire”.