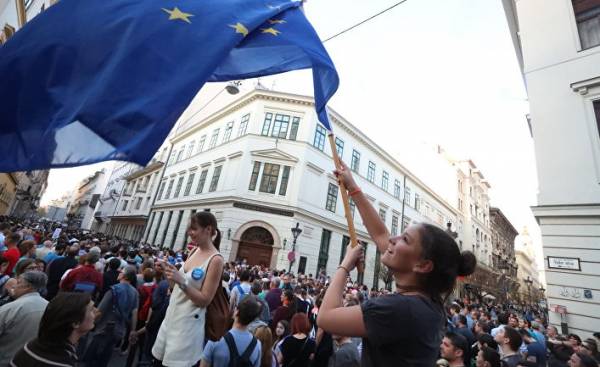 Three capitals in Eastern Europe, three of the same picture. In Budapest protesters try to break through a police cordon to raise the European flag over the Parliament. There, where the ruling party of Viktor Orban (Viktor Orbán) has a majority of votes in Parliament. Over the area you hear the “Ode to joy” by Beethoven, the anthem of the European Union. Tens of thousands of people heed her silence. Andrea Kobor (Andrea Kóbor) sits in the middle of the crowd on the pedestal of a huge monument. “Incredible,” says she. 28-year-old woman, one of the organizers of the protests, which erupted because of the new law on higher education.

The law is primarily directed against known, was founded in 1991 by American billionaire George Soros (George Soros), Central European University (CEU). Andrea she studied at CEU. She knows how valuable this institution for Hungarian youth. “This is one of the rare opportunities for us to start climbing”. Anger and despair over the impending closure of the University Kobor and several of her fellow students created a page on Facebook and called for protests. The first day came several thousand demonstrators, the third — 70 thousand.

In Bucharest at the beginning of the year have gathered even more than half a million people in Victory square. Romanian company handing out free European flags, dozens of them flew over the sea of people. And finally, in Belgrade, a few days ago. In the middle of the hubbub of thousands of mouths, Dimitri, a young student, says he believes in Europe, in democracy, in human rights and friendship among Nations.

Budapest, Bucharest, Belgrade. The list could continue. In the Slovak capital Bratislava last week thousands of people took to the streets to organize a demonstration against the Baghdad government. It seems that the protests in the South-East of Europe, jumping from country to country like a virus. The concept of “Europe” was the idea of struggle. Only here the anger of the streets, directed not against the EU, and Vice versa: angry people hoping for help from the EU and waving his flag.

How big can be the differences between Hungary, which in 2004 joined the EU, Romania, which followed in 2007, and Serbia is a candidate country for membership, so obvious, and their relationship. In all these countries there was a threat of the return of authoritarianism, a quarter century after the end of Communist rule. And in all these countries, a growing number of those who are fighting against it. 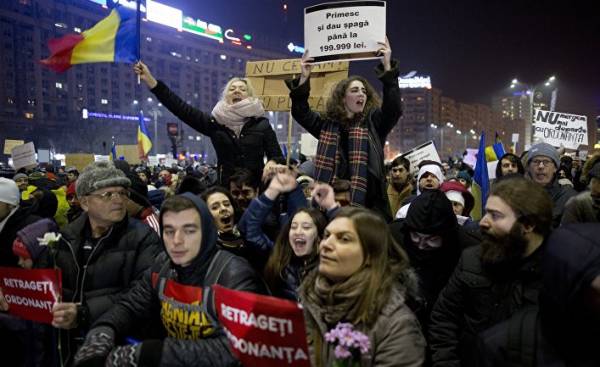 In Romania in January on the streets of Bucharest came out over half a million people, there are tens of thousands of demonstrators in towns and cities across the country. A corrupt political caste wanted to protect themselves through the law on decriminalization of a range of corruption crimes. “Hotii, Hotii”, “Thieves, thieves!”, — shouted the crowd. In Budapest, tens of thousands are resisting the growing tyranny of Viktor Orban, is trying to introduce a new law on higher education. Thousands of people walked through the streets of Belgrade and other Serbian cities after Alexander Vucic (Aleksandar Vučić), in early April, won the presidential elections in Serbia. Now he’s Prime Minister and President in one person. The controlled media applauded. The demonstrators chanted: “Vucic dictator!”

In three countries the protests have been directed against governments or presidents who were elected in a democratic way. But part of the society of South-Eastern Europe all more irritably responds to various forms of abuse of power. This vigilance, too, is the success of the European Union and its often sloped “soft power”. European flags fluttering in Budapest and Bucharest are the recognition that people involved in demonstrations, I feel that for them the mandatory values that underpin the Union. The rule of law, freedom of speech and separation of powers are the standards that are in the still young democracies in Central and Eastern Europe is much less natural than in other EU countries.

The Union in these countries, of course, represents not only the ideal but also the unfolding years the reality. Freedom of movement has made it possible that during this time more than three of the 24 million Romanians found work and income in other EU countries. Thanks to the Erasmus program in Romania, Hungary and Slovakia have a whole generation of students who could study in European countries and gain experience, including becoming acquainted with the virtues of freedom-loving, law-based society.

In addition, each year billions of financial aid from Brussels go to the East. In 2015 it was € 5.6 billion for Hungary and 6.5 billion for Romania. Candidate for EU membership, Serbia also receives over half a billion euros in so-called aid in the preparation for accession to the EU.

The possibility of EU influence is limited

The EU promotes prosperity, to create conditions for the spread of democracy is a long time, this leveling of the economy has been a recipe for success. When Romania joined the EU, the Union insisted that was created by the anti-corruption Agency. The EU understood that corruption was the biggest obstacle to the country to a functioning democracy. Hundreds of thousands of protesters came to the demonstration because it is the Agency the government wanted to deprive of power. They defended the organization, which would never have happened without the EU.

As good as that may sound, it is also true that in these countries, more than anywhere else in Europe, become visible borders and contradictions of European “soft power”. In Romania, the corrupt political caste is pursued legal state institutions. But still remains in power. In Hungary, Orban has been a terrible trick to impose their country in the EU authoritarian rule. And in Serbia, Alexander Vucic is leading the country in the direction of EU membership, while more and more becoming obsessed with the power of Balkan monarch of Proverbs. How is that possible?

There are opposite examples. Spain and Portugal too many years under authoritarian control. In 1986 they joined the EU. Since in these countries has been firmly established democracy. In South-Eastern Europe, this transformation process is complicated by history and geography. Populism Viktor Orban is constantly drawn to the “victim” of the Hungarian nation, which, after the First world war, had lost two thirds of its territory. Serbia is an Orthodox nation with relevant relations with Russia. Many Serbs EU seems therefore only an option, not a necessity.

What can the EU take against the authoritarian manifestations in the East?

Andrea Kobor, a young Hungarian, does not allow himself to succumb to the impressions from the European pathos, which is spread over an area of Heroes. She hopes for Europe, but knows how limited the influence of the EU in Hungary. Viktor Orban leads a kind of long campaign against the Union. In early April the government presented a plan of survey of the people about EU policies. The Minister of internal Affairs, introduced the event with the words: “Stop Brussels!” The government of Orban increasingly artificially stirs up sentiment against the EU, the possible reactions can be calculated.

The EU Commission decided to start legal proceedings against Hungary over a new law on higher education. The Commission demanded from the Hungarian government to make changes in addition to the law as a national law violates EU rules. Andrea Kobor aware of the contradictory actions of Brussels. Every protest from Brussels, afraid she will give the house a new impetus to the campaign by Orban. “Dealing with Orban,” she says, ” we, Hungarians, have to decide for themselves. Only it’s difficult.”

Are many European flags at the Heroes square, only a touching symbol of helplessness? EU to this little that I could do in Hungary, but the fact of his actions: when he can not stop the authoritarian figure, then he at least should inform those who are fighting against nationalism and for the EU that he is on their side. Precisely because of its freedom of action is limited, this often leads to the fact that he, at least, doesn’t make mistakes. “Also among us, the organizers of the protest, says the Pro-European-minded Andrea Kobor, and the EU is controversial. In the eyes of many, he represents the interests of large corporations, not its citizens. For me EU is the lesser evil, nothing more!” 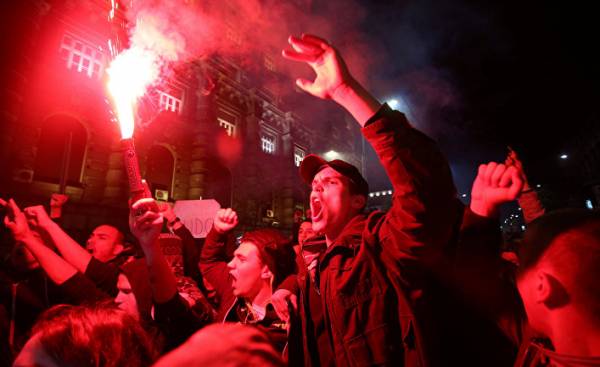 © REUTERS, Djordje KojadinovicАкция protest against the victory of the Prime Minister of Serbia Aleksandar Vucic in Belgrade

As the EU is able to make mistakes, you can clearly see just in Belgrade. There’s 26-year-old Ivan holds high the banner on which is written: “Vucic dictator!”, however, he is blowing the whistle. Ivan completed higher degree in anthropology, but like most of the Serbs of his age, he has no permanent job. Ivan joined the crowd of people that gathered at the Parliament building and is now going to carry their protest on a broad grey boulevards of the Serbian capital. Ivan, as he says, in a somewhat bantering tone, “for Europe, the brotherhood and all that. Of course!” The harder it is to understand how a Supreme representatives of the EU to communicate with the elected President Survived. The German Chancellor invited him during the presidential election campaign in Berlin for lunch. After his election victory received congratulations from Brussels. No word on the ongoing control of the press.

Should it be like this? The fact that Serbia can develop autocracy, is not a fantasy demonstrators — this is a real threat. As for Hungary and for Serbia it is true that the EU has nothing to do with national policy. Vucic — Serbian product of circumstances. And Ivan knows it. But the EU is not exempt from liability. As unnecessary applause from Europe to Vucic are a message: first of all we need a stable relationship — peace in the Balkans.

It is possible that the message from Brussels is even desirable. In dealing with authoritarian regimes inside and outside the Union, the EU increasingly behaves like a real great power: very pragmatic. However, he needs to follow in order not to disappoint the protesters in the streets of Belgrade, Budapest and Bucharest.