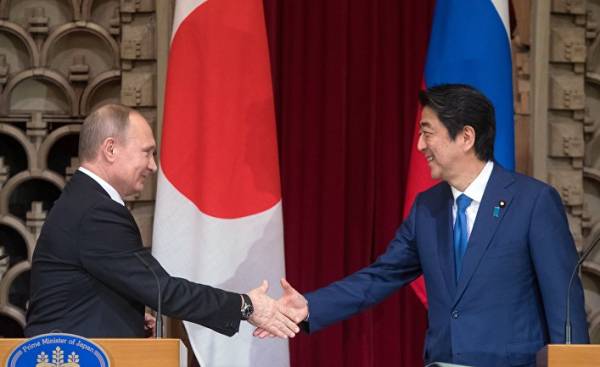 Japanese Prime Minister Shinzo Abe will discuss in Moscow first of all economic cooperation issues with Russia. But the long-term goal is Tokyo — the return of the southern Kuriles.

The Prime Minister of Japan Shinzo Abe during his visit to Moscow, will meet on Thursday, April 27, with Russian President Vladimir Putin. From the talks of the leaders of the two countries the most and will wait for news about the future of the Kuril Islands, ceded to the Soviet Union after the Second world war. Of course, this issue is resolved now. But Abe, according to observers, there is a good chance to negotiate with Putin about the beginning of the joint economic development of the Islands, belonging to Russia which disputed Tokyo.

Four South Kuril Islands were occupied by Soviet troops in 1945, and since then this fact has a serious impact on relations between the two countries. Because of this, Russia and Japan still have not even signed a bilateral peace Treaty after the Second world war. On Japanese maps the southern Kuril Islands are referred to as its own “Northern territories”.

“No chance” for a solution to the dispute

During the Russian President’s visit to Japan in December last year, Moscow and Tokyo have agreed to discuss the possibility of joint economic activities on southern Kuriles. But in February, Russian authorities have made it clear that it is not too interested in negotiating the transfer of the Islands under Japan’s control. First, Moscow announced that five small and before nameless uninhabited Islands of the Kuril ridge has the names of Soviet and Russian statesmen. And then the defense Ministry reported on plans to place on the southern Kuriles until the end of the year division. Both announcements sparked protest from Tokyo.

In the words of researcher of Meiji University Okumura yuna, “do not like” to solve the territorial dispute between the two countries there has been any progress. “I see no reason that would compel Putin to make a move, definitely gone to his disadvantage in the eyes of the nationalist part of its electorate. Especially considering the presidential elections scheduled for March next year”, — says the analyst.

“He’s got enough problems in the international arena, why would he make a move that obviously would have looked like a concession,” said Okumura in an interview with DW. I agree with him and Professor at Tokyo International Christian University Stephen Naji. There is not the slightest chance that Abe will be able to return to the island, he said in an interview with DW.

In the foreground — the economy

It seems, understands this and the Japanese Prime Minister. The interlocutors DW noted that before the meeting, Abe shifts the focus from the question of the return of the South Kuril Islands of Japan on economic cooperation. “If Abe will be able to announce progress on the issue of the export of resources from the Russian Far East, he can show that he returned not with empty hands” — believes Nagi.

“Putin has no reason not to wish for greater involvement of Japan in the economic development of the Far East”, — the expert continued. In addition, thanks to economic cooperation, Moscow and Tokyo can reduce its concerns in the security sphere. “For Japan, the rapprochement with Russia as an economic partner will help to balance the threat from China or to move out of Moscow’s geopolitical orbit of Beijing in the region — says Stephen Naji. — Russia is also concerned that China in search of resources may be interested in expansion to the North, i.e. in the direction of the Russian Federation”.

In November last year, Ministers of economy and energy of Russia and Japan agreed to develop cooperation in a number of projects, including joint production of oil and gas in the Russian far East, and also about cooperation in the field of wind energy and decontamination of Fukushima.

Railway through Russia will connect Japan and Europe?

Another joint project, negotiated between the parties — the railway tunnel between Russia’s Sakhalin and the Japanese island of Hokkaido on the bottom of the La Perouse Strait. If it is implemented, Japan will have the opportunity of railway communication with Europe via the TRANS-Siberian railway.

Consider the option of laying a 50 km-long undersea cable to export electricity to Japan from Russian power plants. The project cost is estimated at 5.7 billion dollars.

Tokyo calls on Japanese companies from various sectors of the economy, including tourism and medical companies, to consider the possibility of participating in Russian projects. However, businessmen from Japan are not in a hurry to do it, for fear of the unpredictable investment climate in Russia.

Although the territorial dispute over the Kuril Islands as if relegated to the background, observers believe that Japan hopes, through the development of economic cooperation to bring the solution to the problem of the South Kuril Islands. It remains a long-term goal of the Japanese Prime Minister, says the young Okumura.

“Abe is very stubborn and determined person. At the moment, the probability to achieve good conditions in the question of “Northern territories” is small, but I’m sure he lays the Foundation for a long campaign (to return the Kuril Islands to Japan. — Ed.)”, the analyst concluded.