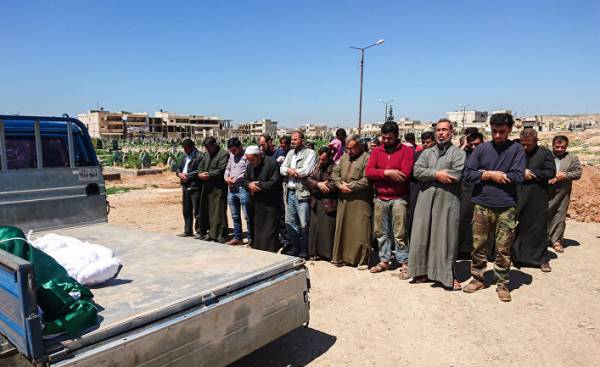 Three weeks have passed since the world was horrified chemical attack in the Syrian Khan Sheyhun. But I guess someone does not want to carry out a serious investigation of what exactly happened and who is behind this event. The organization for the prohibition of chemical weapons (OPCW) has so far not even visited the city to gather evidence.

When 4 APR the horrific pictures of victims of a chemical attack in Khan Sheyhun sold around the world, the ruling politicians and the major media immediately blamed on Syrian President Bashar al-Assad.

Donald trump was so sure who is to blame that even a violation of international law has decided to attack Syria with cruise missiles. Last Monday, the United States adopted punitive measures and introduced sanctions against Syrian 271 who work in a research center in Syria.

But the fact is that the three weeks that have passed since the incident and there has been no serious independent investigation about what happened in Khan Sheyhun and who is to blame.

April 19, the Organization for the prohibition of chemical weapons (OPCW) made the first speech, based on the trial, which began on 5 April.

This international body previously investigated the origin of chemical weapons in Syria. Exactly the OPCW in 2013 and later supervised the transfer of government 1.3 thousand tons of chemical weapons, which was subsequently destroyed.

In a press release on April 19 the Director-General of the OPCW Ahmet üzümcü (Ahmet Uzumcu), a former Turkish Ambassador to NATO, said that was “undeniable” evidence of the use in Khan Sheyhun nerve gas sarin or similar substances.

The conclusion is based on the biomedical samples taken from three dead and seven persons now are in hospital.

It remains unclear who supplied the OPCW with these samples and where they came from. These questions are very important to answer, since the organization did not send anyone to Khan shaykhun.

As the newspaper Proletären previously stressed, Khan shaykhun and the whole province of Idlib, where the town is located, and in 2014 is controlled by “al-Qaeda” (the terrorist organization banned in Russia — approx. ed.) and related extremists.

The doctor in Khan Sheyhun, which appeared in the Western media as a witness after the attack on April 4, is a suspect in terrorism British citizen Shajul Islam (Shajul Islam). After a rocket attack USA shahul of Islam was among the disappointed that trump did not continue the attack.

If not the doctors that work under the auspices of the terrorists and are interested, that the United States bombed Syria, help the OPCW? Or organization has received these samples from Turkish authorities, the country is deeply involved in the process of regime change in Syria and directly put the blame on Assad?

Many countries have questioned the impartiality of the OPCW. April 20, Russia and Iran put forward a proposal to hold a new international investigation under the leadership of the OPCW.

In the opinion of Russia and Iran, the OPCW experts have to visit the place where, according to available information, there was a chemical attack, to find out what happened. These countries also believe that experts should visit the Syrian shayrat air base, where, according to, for example, USA, was used for the sarin attack.

The requirement that the investigators visited the above areas of crime, it seems reasonable. Given that Western-backed “White hats” freely carry out their activities in Khan Sheyhun, opportunities to visit the city should not be.

But the leadership of the international organization against chemical weapons, and primarily the representatives of the Western countries, refused to do so on the Russian-Iranian proposal.

The Syrian government also submitted to the UN request to Syria sent a delegation to examine the events in Khan Sheyhun. This query also did not get a positive response.

There is a risk that the investigation of the OPCW will be part of the work to support those seeking regime change in Damascus and opposes the decision of the conflict through negotiations between the Syrian government and the opposition.

About the suspected use of nerve gas we want to remind you that wrote Ahmet üzümcü in the “al-Jazeera” in February 2016.

“Persistent allegations that non-state actors to the conflict used chemical weapons in Syria and Northern Iraq, are of particular importance, as this increases the risk of the use of toxic chemicals in terrorist attacks. The production of nerve gas is a complex process, but the extremists can easily use toxic industrial chemicals such as chlorine — if they get their hands on. Attack with conventional weapons on the building, which contains chemicals, is another potentially devastating…”

In the first testimony of Khan shaykhun was said that residents have been exposed to chlorine.

True or not, we won’t know until after a serious investigation by those who would not draw conclusions about the guilty in advance.