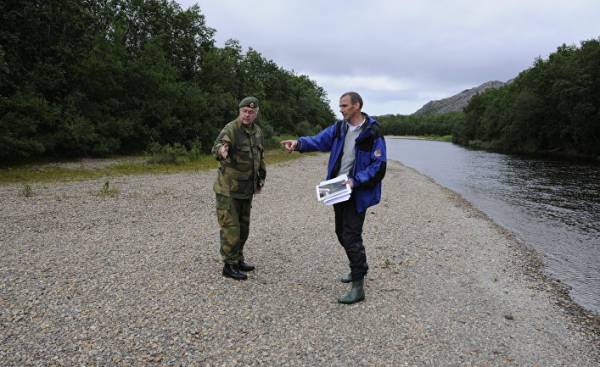 Relations between Norway and Russia has seen better days, but we’re trying to do something specific to improve relations between neighbors, said Igor Chernyshenko, a politician from the Federation Council of the Russian Parliament.

Friday Chernyshenko, arrived in Kirkenes, where together with a group of other MPs from the upper house of the Russian Parliament laid a wreath at the monument to Soviet soldiers, erected in memory of the liberation by the red Army in Eastern Finnmark in the autumn 1944.

At a meeting in ward

Historically, Northern Norway and Russia have many in common.

Chernyshenko and the rest of the members of the Russian delegation this weekend will go in the Pomeranian town of vardø (Vardø) in order to take part in political meetings with their Norwegian counterparts from the Storting and Sametime.

The participants will discuss in particular the possibility of introducing a visa-free entry for up to 72 hours in Finnmark and the Murmansk region is the further development of an existing Agreement about local near-border movement from 2012.

Chernyshenko confirmed that such visa-free zone of interest, from the Russian point of view, but that’s a question that affects not only bilateral Norwegian-Russian relations, Norway will clarify the possibility of such a step with its European partners in Brussels.

For a given a direct question about what he represented relations between Norway and Russia, Chernyshenko says: “Relations are good, but could be much better.”

Positive signals from Moscow and Oslo

• Russian Federation Council, or upper house of the Russian Parliament has a long tradition of cooperation with the Norwegian Storting.

• But because of the worsening political relations between Russia and Europe after the annexation of Crimea in spring 2014 in the last two years, meetings were not held, according to Chernyshenko.

What is now the meeting place of the elected Eastern Finnmark, is not accidental.

“I believe that the current international situation is due to pressure from countries that have extremely negative attitude to Russia. But we are trying to do something specific to improve relations between the two countries, and we do not look around in search of how it’s done in other countries. Russia and Norway may continue to maintain their good relations, we have common interests in the Arctic, the visa-free zone and together we manage fish resources,” says Chernyshenko.

He stressed that such meetings get the support of the political leadership in both countries.

“Murmansk and Finnmark are closely cooperating with each other, and like Oslo and Moscow make it clear that continued cooperation is important and of interest,” says Chernyshenko.

This visit is another confirmation of the fact that relations between Norway and Russia on the path to normalization, says Lars Rowe (Lars Rowe), an expert on Russia and researcher at the Fridtjof Nansen Institute.

“A year ago such a meeting would be a sensation, but not now. This suggests that the Russian regions are interested in further developing cooperation within the Barents region, and that Russia is seeking to break the political isolation that she had to endure,” — said Rowe.

Both Norway and Russia are very interested in the fact that the level of conflict in the North remained low, says Rowe.

“Strengthening the regulatory functions of the law of the sea in the Arctic development in the interests of both countries. Maritime law is a kind of superstructure on top of all that will occur in this region,” says Rowe.

Welcomes the abolition of visas

Rowe describes the desire to create a 72-hour visa-free area between Finnmark and Murmansk as a difficult task, but believes, nevertheless, that its creation is possible.

“We have between Norway and Russia already has visa-free zone, and it really works. Such a visa-free regime will lead to an increase in the number of people freedom of movement which will increase, especially for the Russian side,” says Rowe, and recalls that in the Murmansk region is home to about 800 thousand people.

The identity of the residents of the border areas

• Agreement on local border movement between Russia and Norway entered into force in may 2012.

• Certificate of the border resident entitles to cross the border without a visa and many times, the total number of stay in the neighbouring country should not exceed 15 days.

• The border area is considered part of the Sør-Varanger at a distance of 30 km from the border, as well as those portions of Nickel and Pechenga which lie within a 30-kilometer zone from the border, and areas of polar and Korzunovo.

• The identity of the residents of the border areas is issued for three years. The existence of such certificates does not in itself give the right to work in the border area of another state.

• All persons residing in the border area in more than three years, regardless of nationality, have the right to obtain the identity of the border resident.

• As of may 2017, the identity of the residents of the border areas have received 6 387 Norwegians.