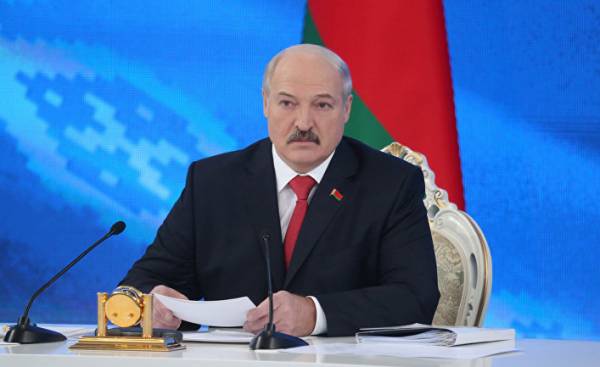 On 21 April Alexander Lukashenko delivered his annual message to Belarusian people and Parliament. Hopes for Western credits have not yet been realized, the Eurasian economic community is also not happy, but to change the device model of the Belarusian head of state is not going to.

Alexander Lukashenko began his speech, which lasted two and a half hours, with the international situation. Almost not affected Russia — most talked about cooperation with China, sharply criticized Europe with which the last two years seems to be as close to Belarus. The Belarusian head of state complained about trade barriers from the EU and pointed to the double standards of Europe, which blames the police for brutal suppression of winter-spring protests, and she their demonstrators “water and pours poison gas”.

Lukashenko demanded from Europe to move away “from those principles in our relationship as it was before” “stop us urge”. He stated that he does not want Belarus took place the Ukrainian scenario, “I don’t want to shoot, beat his men. I made the decision not to allow collisions”. Lukashenka also called on Europeans to “look at their leaders who have something missing in the lower part of the body,” “it is intolerable that beat, break, crush trucks. (…) You going that soon these powers that you fear, will have power. Then you realize that you have lost.”

Instead of criticism, according to Alexander Lukashenko, the West would estimate, given the complex international situation, the relevance of the former Belarusian initiatives to establish new large-scale dialogue between East and West “similar to the Helsinki process.” “I confirm once again: if need be, and the world is interested in it, Minsk is ready at any moment to become a place for dialogue aimed at understanding the new rules of world order”, he said.

“Europe has disappointed, Alexander Lukashenko,” — said in an interview with RFI, the coordinator of the analytical project Belarus Security Blog Andrei Porotnikov.

Andrei Porotnikov: Obviously, the hopes that were pinned on Europe did not materialise. First, it could be due to the access to the European market and receive some financial support from the West. Sound that is not allowed Belarusian goods to their markets and do not give money, although I own a lot of the money and could give. Plus traditionally, interestingly, he is again trying to go back to the situation 2014 to bargain regional security, has become a famous phrase that we are ready to ensure your safety cheaply, and at first, even for free. So in fact, no new agenda, there is confusion and lack of understanding of what to do. Speaking generally about the entire message, not just the foreign parts, then neither one of the critical issues facing the country, no response was received.

Andrei Porotnikov lists the main challenges for the existence of the Belarusian system, the neutralization of which the people and Parliament, in fact, heard nothing.

Andrei Porotnikov: Lukashenko himself is at a loss, or prostration. The development of bilateral Belarusian-Russian relations, taking into account the role played by Russia, remains a priority of Belarusian foreign policy. Nothing sounded, except for the disappointment and the fact that the EurAsEC (Eurasian economic community) does not work. The second issue relates to the prospect of further development of relations with the West. It is obvious that the agenda that interested in Minsk, the West is absolutely insufficient. The third point is related to the internal socio-economic situation: unemployment, mass impoverishment of the population, the degradation of industry in the regions — there are no answers to this, too, was not heard. Question the quality of decisions in public administration: again, talking about what we need to change something, but how do you change and who change is unclear.

According to the economist, the head of the Association of small and medium enterprises Sergei Balykin, the message designed for different addressees — to calm the Belarusian voters and persuading international financial institutions, tightening with the issuance of the loan to Minsk. “Therefore, the speech turned out not too convincing,” — said Sergei Balykin.

Sergei Balykin: the President’s Message to the people and Parliament is somewhat contradictory feelings. This is a highly eclectic document that Mr. President was trying to cross a snake and a hedgehog, trying to combine market rhetoric, with its openly socialist or even Communist beliefs. States that to reform we have no money. Clearly, there is no money for reform — there is no market economy, no effective economy, no money, no money — no possibility to reform. A vicious circle.

But, according to the expert, this year the message is still different from the previous: “Lukashenka finally links the issues of economy and security of the country”.

Sergei Balykin: Obviously, for Lukashenko it becomes clear that the problems for the existence of the Belarusian state, for his personal profile is generated not by some external threats and conspiracies, internal economic problems, which he doesn’t know how to deal.

Sergei Balykin also draws attention to the fact that the head of state spoke about the vital importance of foreign direct investment in the country’s economy. But here has its own special understanding of the problem.

Sergei Balykin: the fact that Lukashenko did not understand the main thing: it seems that he continues to confuse investors with sponsors who just invest money in our country and solve our socio-economic problems. But for the investor interest is very simple — earn interest, get some benefit. I think the message that shows on the one hand, that the situation in the economy deteriorates. With the same evidence and it shows that the prospects of our country is not, in any case, under the current regime. Because the government is not ready to go on a civilized footing, not willing to work according to generally accepted principles and wishes to maintain for themselves the lifestyle that has emerged in our country over 25 years of Lukashenka’s rule and 70 years of Soviet rule before that.

As for the notorious decree No. 3, which involves the payment of taxes unemployed Belarusians and caused a massive wave of protests across the country in February and March of this year, then, according to Lukashenko, in modified form, it will benefit the Belarusian economy. Just need “the new concept is to get everybody to work.” “These are the people who need to get to work, — said Alexander Lukashenko. And we have this experience — the experience of the Soviet times. I saw how this was done. Yeah, maybe not the same methods, and may be the same.”