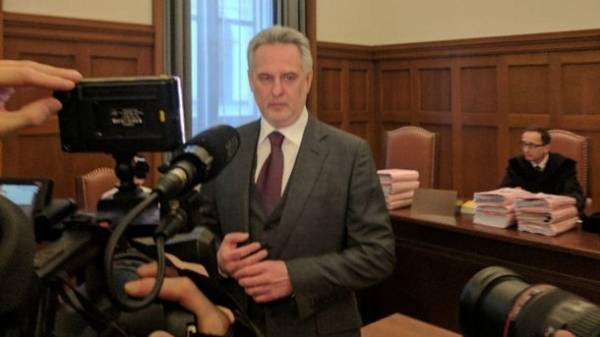 The case against Ukrainian businessman Dmitry Firtash is completely political, and contrary to the Prosecutor’s office. About this at the meeting of the court in Vienna, Austria, said the lawyer of the businessman Christian Hausmaninger.

“Firtash is a large figure for the policy of Ukraine, Europe, USA, Russia. And his case is purely political,” – said the lawyer.

According to him, the statements of the prosecution that the case is not political and is associated supposedly with the Russian mafia, is unfounded speculation.

Another lawyer Rudiger Sender recalled that the court of first instance on 30 April 2015, acknowledged that the request of the U.S. justice Department for the extradition of Dmitry Firtash was politically motivated.

In addition, as stated by the defender of the entrepreneur, net policy in this case is seen in Ukraine.

“Dmitry Firtash trying to prevent to return to the country, the interior Minister puts soldiers at Boryspil airport trying to make his return dangerous,” he said.

The lawyer quoted a whole heap of newspaper headlines of Western papers, in which Firtash presented in a negative light. The representative of protection connects this action with the purposeful mission of the United States to exclude the Ukrainian businessman from the game.

The sender also noted that America does not execute the clauses of the extradition Treaty. According to him, Washington, in particular, has not provided enough evidence.

The Pentagon has criticized Turkey’s plans to buy the s-400: we want investment in NATO