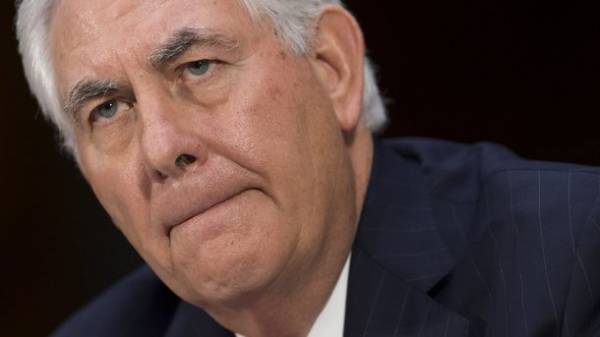 Washington is interested in improving relations with Moscow, however, believes that Russia’s actions in Eastern Ukraine to prevent it. This was stated by U.S. Secretary of state Rex Tillerson, the US state Department in a telephone conversation with President of Ukraine Petro Poroshenko, which took place on 23 April at the initiative of the American side.

“The Secretary of state Tillerson called the President of Ukraine Petro Poroshenko to discuss his recent trip to Moscow and a message to the Russian leadership that, though the U.S. is interested in improving relations with Russia, Russia’s actions in Eastern Ukraine to prevent it”, − noted in the state Department.

During the conversation, U.S. Secretary of state assured Poroshenko that the US is “firmly committed to the sovereignty and territorial integrity of Ukraine” and reaffirmed that the United States will not withdraw from Russia sanctions as long as “Russia will not return full control over the Crimean Peninsula of Ukraine and will not execute fully the Minsk agreement.”

In addition, Tillerson accepted the condolences of Poroshenko in connection with the death of a citizen of the United States, members of the special monitoring mission of the OSCE.

The Secretary of state also stressed the importance of “Ukraine continued to make progress on reforms and the fight against corruption”.