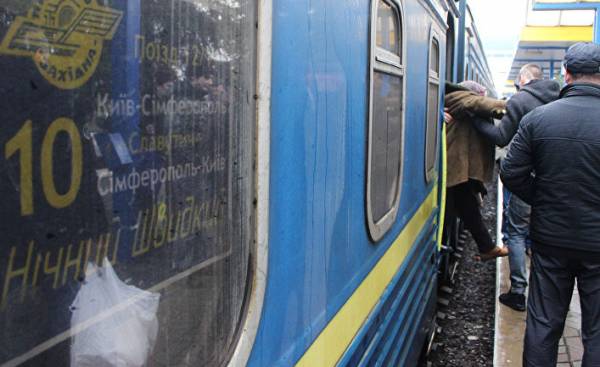 Illegal trip to the Crimea backfired the Russian singer lolita, Ukrainian border guards taken off the train. The singer for three years denied entry to Ukraine. And all because of the fact that in 2015 she appeared in Kerch. About his adventures on the border of Lolita told in social networks. The singer claims that went to Kyiv to visit a sick daughter. The train took it at 4 am in Konotop. The nocturnal adventures of Lolita became an occasion for jokes and sarcastic quips to the singer by the users sotsseti.

The reaction of users of social networks:

Vadim Kharchenko: did the Right thing. It was necessary to think earlier about the consequences of their actions, and one law for all. How could she leave her child in a country ruled by the bloody junta? Ay-ay-ay.

Anatoliy Loyko: When Russia began this shameful and criminal war with Ukraine that has already killed 10 tsyach, wounded tens of thousands, of refugees, half a million, what did you do? Protested, staged a demonstration? No you go to Kerch, thus supporting the annexation of Crimea and the war. Now, making a surprised and pained face? Are you not ashamed? Certainly not a shame, such shame.

Martin Nebo: Musicians with the Director, you were carrying to a sick daughter to play gigs? Why this cheap provocation in the style of — what the Nazis, mother to daughter not allowed! You went to Ukraine to earn money. Cynical. Vrusha.

Rossing Alexander: And You didn’t realize that supporting the annexation of Crimea, as You close its way to Ukraine? 2×2=4.

Oleg Chernyak: what are you waiting for? You are breaking the law of Ukraine, and for that you need the strengthened food stamps issue?

Valery Partisans: it is a Pity that us law is not on the level. Normal should not just train to shoot, and still give 15 days with a broom to wave. At the same station.

Vyacheslav Martynov: to Celebrate the seizure and occupation of the territory of Ukraine, and then cry that you were not allowed. Top blasphemy, cynicism and arrogance bordering on stupidity.

Alexandr Tverskoy: g-G-g-lolita was taken off the train, wanted to get to Ukraine. They all think that the war and annexation — is jokes, well, well. As there was Kuprina: “Lieutenant, now the same gait at gauptvahta, mA-Arsh!”

Anton Gerashchenko: good job guards and the security service of Ukraine! The lolita banned entry to Ukraine for repeated violation of the border, illegal entry to a tour in the Crimea, which was recorded and published by the volunteers of the project “the Peacemaker.”

Yevhen Leshan: Lolita, light of my life, fire of my loins. My sin, my soul. Lo-Lee-TA: the tip of the tongue taking a trip of four steps up the sky to the fourth gently exhale: Mi. Law. Ska. Ya Then another three steps, the last stolknuvshis in the teeth: To.But.Top. And then another five priplyasyvaniya language in oral cavity. Fig. Ez. Dit. Cerci.

Alexey: if you were in Kerch? Was — so shut up!

Hans Meyer Art Zed: If he was in the Crimea, no)

Irina Ochkovska, Removed from trains, cars and canoe… but what misery and Woe such!

Yoko yokozuna has had to punish illegal border crossing. To let in Konotop and never come out. Never.

Yuri Yankovski: Konotop has all chances to become the leading stage for Russian singers. Came, sang on the platform went back.

Sasha: the Russian guards under the guise of also need to keep lolita.

Anton Hoja: lolita was taken off the train and sent to the ghetto.

Menand: lolita was taken off the train, filled with foam and in the National guard.

Arkady Babchenko: Ukrainian border guards have denied entry to the lolita and removed her from the train to Konotop. Here’s what I could never understand… That you climb up, bend, smile, tease, eat competitors, are already very nasty, in the end we come out, get all the fame, money, esters on the Ground, access at the top of the Beau Monde, the photos on the covers of glossy magazines, huge fees to do what? To drive in Konotop by train.

Anastasia Romanova: That’s fine. Now, when sober, by the date the passport will always know when the period of non-admission in Ukraine it will be.. Probably will celebrate in the future this event is not worse than his birthday.

Saleh Mussa: a grandmother, after a fair dose of alcohol….

Nicolay Prudkiy: I like Lolita, brave woman, you’re lying about it!