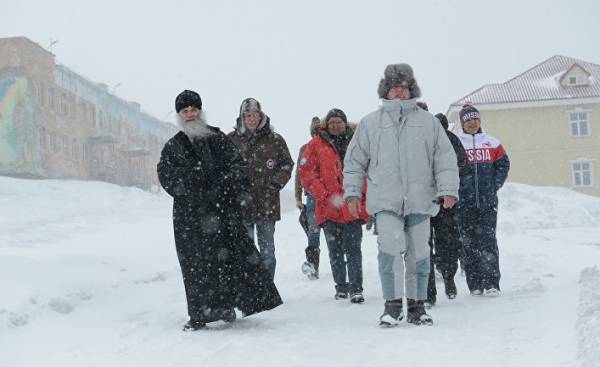 When in may, about 100 politicians and experts will gather at Spitsbergen, the main topic of the agenda will be climate change and new opportunities for economic cooperation in the North.

But immediately after reports that NATO for the first time will hold a major seminar on Svalbard, it became clear that the desire of a defence Alliance to focus attention on what is happening far beyond the Arctic circle, has a political rationale.

Security challenges in the region will also be one of the topics of this meeting. Norway has long wanted to attract the attention of NATO and the United States to this strategically important area.

This, of course, you know, and the Russian authorities, who on 19 April made a statement that this archipelago is not suitable for holding such meetings.

This is contrary to the spirit of the Svalbard Treaty?

In a statement, the Russian authorities stated that, when there is a conflict between NATO and Russia and when NATO builds up forces near the border with Russia, “attempts to pull Svalbard “under the wing of the military-political bloc” and the holding of events under its auspices does not meet the spirit of the Treaty, 1920″.

The statement, designed in unusually harsh terms, meeting on Svalbard called provocative action that could increase tensions between Russia and Norway in the North.

NATO parliamentarians visited Svalbard. He was there in 2004.

But there is no doubt that the situation has changed completely, while Russia and other Arctic countries repeatedly state that this region should be an example of peaceful coexistence and cooperation.

Russian President Vladimir Putin said at a major Arctic conference in Arkhangelsk in late March that Norway and Russia have agreed on the delimitation in the Barents sea should be an example for almost all unresolved disputes in the Arctic.

But at the same time Putin has arrived to Arkhangelsk after visiting Nagurskoye a new Russian base on the island of Alexandra to the West of Franz Joseph Land. Here Russia for two years has modernized the old Soviet base that is now able to make modern fighters.

“Get ready to defend Russia’s interests”, — Putin said at a meeting with officers and soldiers at the base before heading to Arkhangelsk.

The provocative visit of Rogozin

Thus, there is no doubt that the Arctic is building up forces, although relatively limited.

Russia declared Franz Josef Land its territory in 1926, despite the protests of Norway, who believed that the first in this archipelago was a Norwegian fishers.

But while the Norwegian authorities were probably very pleased with is the fact that in 1920 received recognition of its sovereignty over Svalbard under the Treaty, which stated that this area should not be used for military purposes.

Russia acceded to the Treaty on paper in 1924, but only in 1935 became a formal party to the Treaty after the United States also recognized the Soviet Union.

At that time the Soviet Union has for several years led the work in the mines of Svalbard, and this work continues at present. Since then, the cooperation between Norway and Russia in this area went relatively well.

During periods when there were conflicts in the relations between East and West, contacts between Russians and Norwegians in Svalbard helped to reduce tensions.

But after in 2014 Russia annexed the Ukrainian Peninsula of Crimea and started supporting Pro-Russian separatists in Eastern Ukraine, tension in Europe has increased dramatically. Now we see that she moves and to the North.

Russian authorities believe that Norway is organizing what they call a NATO meeting in Svalbard, enhances tension. But Russia has little to say about what Russia has built a military base just a few hundred kilometers to the East of Spitsbergen.

The Arctic is a new area of confrontation?

The famous Russian commentator Alexander Khrolenko, which specializiruetsya in the North theme and the situation in the Arctic, writes in a commentary issued by state-controlled Russian news Agency “RIA Novosti” that the cold of the Svalbard archipelago may become a “hot spot” of international politics.

Khrolenko highlights what happened when the Russian Deputy Prime Minister Dmitry Rogozin visited Svalbard in 2016, despite the fact that it was included in the list of persons whose stay in the country was undesirable, since they supported the annexation of the Ukrainian Peninsula of Crimea.

Khrolenko believes that Rogozin has always advocated a peaceful Arctic, and stresses that he arrived at Spitsbergen civil flight and not a combat ship of the Northern fleet.

This is despite the fact that Rogozin has aggravated the situation in conjunction with its intermediate landing, making the message that in a mocking tone, said that Norwegian authorities failed to detain him, and he quietly went back to Russia.

Became a sensation and the fact that the Chechen special forces, flying, however, also civil flight made an intermediate landing in Longyearbyen in April 2016, heading for military exercises on the ice in the North pole.

The Russian government decided to make a press statement in which they protested against the fact that civilian NATO parliamentarians gather in Svalbard. A more formal protest in the form of notes or anything like that — has not yet been reported to the Norwegian authorities.

If Russia continues at the same time in the same area the buildup of forces, then it would probably be more correct for her to be quiet.

The question is whether now is someone to sit down at the negotiating table and stop the fact that the Arctic becomes the —what many fear — a new region of tension and conflict.

Maybe you ought to debate about how to prevent it, became the main item at the next meeting of the Arctic Council, to be held in Fairbanks, Alaska, USA, may 11. That is, the next day after the NATO parliamentarians will visit Svalbard.

And then you could ask: is the holding of a meeting of NATO in Svalbard before the meeting of the Arctic Council in Alaska tactically a brilliant move by the Norwegian authorities?