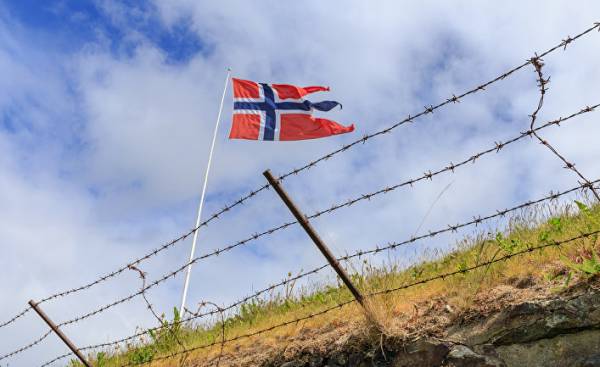 On Wednesday, the Norwegian Minister for the first time in three years, walked through red square. The Minister of fisheries and trade Meland Monica (Monica Mæland) and a large Norwegian delegation participated in the first after the June 2013 meeting of the Norwegian-Russian economic Commission.

The Norwegian government has decided that the relationship between Russia and Norway should be improved.

Meland also touched upon the question of what Russia bans Norwegian planes to use Russian airspace for flights to Asia.

In addition, it reminded the Russian of the deal, the Norwegian businessman Atle Berg (Atle Berge), which denied a visa after he built a large factory for the production of concrete in Murmansk.

The Russians, for their part, put a few questions relative to Svalbard and encouraged Norway to allow Gazprom to operate on the Norwegian continental shelf.

“The potential for cooperation between Norway and Russia on gas and oil is huge,” said the Minister of natural resources and environment Sergey Donskoy.

“We are good neighbors and cooperate in many important areas,” — said Meland.

Aftenposten: If it’s that important, maybe You ought to come to Moscow before?

Meland: Other countries have already started a dialogue at the political level. Now, therefore, Norway considers it appropriate.

Norwegian-Russian meeting was held in a closed and well-guarded the President hotel in Central Moscow. This is the place where the Chechen killers, who killed Russian opposition leader Boris Nemtsov in February 2015.

There are few places where the investment of the Oil Fund would have been as great as in Russia last year.

The stock price increased by 53% to 23 billion, divided between 51 company.

The cost of all the Russian portfolio of the Oil Fund currently amounts to 42 billion kroons.

The value of shares in major Russian Sberbank grew by 2016 from 1.8 billion to 3.9 billion.

Sberbank fell under the anti-Russian sanctions, but the Oil Fund bought these shares before the introduction of sanctions for Russia’s annexation of Crimea in 2014.

“The growth is due to market development. The salaries of the Oil Fund in shares and securities increased,” — writes in an email to Thomas Sewang (Thomas Sevang), head of Department on public relations investment management Bank of Norway (NBIM).

Meanwhile, you will need a lot of time to the Oil Fund has reimbursed all lost after the Russian economy was in “good storm” of 2014:

The strong fall in oil prices, the falling value of the ruble by 50% and sanctions over Ukraine have led to the fact that during 2014 Oil Fund lost 16 billion crowns.

Norwegian-Russian trade ties pushed back to 25 years ago

This is due mainly to the Russian “counter-sanctions” in response to Western sanctions, which led to the fact that a large Russian market was closed to Norwegian seafood.

“The current level approximately corresponds to what was after the collapse of the Soviet Union in the early nineties. Now everything can only go up,” says Director of the Norwegian-Russian chamber of Commerce Jarle Forbord (Jarle Forbord).

Complete cessation of the export of fish has led to the fact that Norway was among the countries most affected by the Russian “counter-sanctions”.

Russian exports to Norway increased during the same period.

“The decline was significant,” says Meland and stresses that the decline is associated not only with sanctions but also with the global economic situation.

“We believe that development activities have the potential, and this will benefit both parties.”

For Statoil, Aker, Kværner and other companies seeking to get their share of the Russian market, the good news is that Norwegian Ministers are once again beginning to pay visits of courtesy to Moscow.

On Wednesday, Liv Monica Stubholt (Liv Monica Stubholt), former head of the companies Aker and Kværner, and politician of the centre Party, expressed his opinion about the sanctions in comments published in Aftenposten:

“Market position is lost. China seizes positions in the oil and gas of Russia”, — wrote Stubholt. She compared it with “traffic and braking at the same time”.

“Now absolutely nothing to do with the sanctions,” — said Meland.