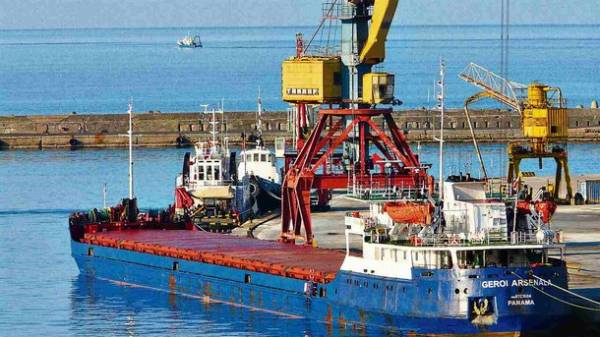 Yesterday at 4:00 in the Kerch Strait, which raged 7-point storm, sank loaded with grain former Ukrainian, and now the Turkish cargo ship “Heroes of Arsenal.” This was announced by the Ministry of emergency situations of Russia. Among the 12 crew members was 9 Ukrainians, one Georgian and two Russians. At the time of writing was saved only Ukrainian-minder Konstantin Chernenko, two died, the rest were considered missing. The most likely cause of the disaster — deterioration of the vessel, which is more than 35 years.

DISASTER. The accident occurred in 27 km South of the port of Taman. Before the crash, “Heroes of Arsenal” managed to submit the distress signal SOS. According to the testimony of crew members of the tanker “Armada Navigator”, who was walking nearby, “Heroes” broke in half by a giant wave, reaching 5 meters in height. Some time the ship drifted, which allowed part of the crew to put on life jackets and to leave the Board. Yesterday they were looking for.

The operation held by the Federation. At the crash site were about 140 people, 17 units of equipment, including the Mi-8 helicopter and a remotely operated underwater vehicle “Falcon-300”. It is designed to perform search operations in coastal waters, equipped with color cameras, can work at depths up to 300 m. the Sea is heavily polluted by leaking overboard with diesel fuel, which were on Board about 30 tons, so was prepared to put up barriers to prevent its spread.

Nothing was life threatening only-minder Ukrainian Konstantin Chernenko. It was miraculously lifted on Board the “Armada Navigator”. 35-year-old sailor was supercooled from staying in cold water (8 degrees), its status heavy, but danger to life. “Helicopter see another four in life jackets, but two no signs of life. Due to the strong excitement to pick them up until you can” — told us yesterday afternoon, the operations duty officer EMERCOM in Krasnodar, Russian Federation. To the evening that raised on Board the rescue ship the bodies of the two (according to others three) sailors (their names were not disclosed). Unfound crew members declared missing. Also found a lifeboat without people.

The CREW. “Today,” found the names of the members of the crew. It is the citizens of the Russian Federation A. Vedernikov and D. Pateev, a citizen of Georgia L. kajaia, the citizens of Ukraine Igor Glazko (captain), Alexander Bucura, Marina Svechkar, N. Hanczewski, A. Goncharenko, Sergei Mesnyankin, A. Pantiukhov, D. Sinuk. The only one among the crew the woman is a native of the Odessa region Marina Svechkar, cargo ship she worked as a cook.

“About captain Igor Glazko we know that he is a native of the Donetsk region”, — told us the Russian rescuers. As we found on the ship were sailors, a native of Kherson region. In Kherson we tracked down relatives of one of the missing sailors — Alexander Bacuri. His mother Galina alarmed voice told us that, as of last night, none of them diplomats were not informed about the fate of his son. In Donbass, we tracked down the wife of Sergey Mesnyankina Julia Samodanova. According to her, also, none of the officials about anything she was not notified, so she anxiously awaits news of her husband.

Doctors believe that to save someone else a little chance. “At the temperature of +8 people can stay in water up to 20 minutes, then hypothermia stops the heart. Standard vest does not protect from the cold,” explained the doctor-therapist of the highest category Eduard Mikhailov.

WENT TWO TERMS. In a press-service of EMERCOM in Krasnodar region we were informed that the cargo ship “Heroes of the Arsenal” was built in 1980 in Slovenia for a typical project. Its length is 114 m, width 13 m. the Last Ukrainian port Kherson, where in 2013 the ship was sold to the Turkish company. From 2015 it went under the flag of Panama. “Heroes of Arsenal” walked the route Hereke (Turkey) — Azov (Russian Federation) — Rostov-on-don (Russia) — Poti (Georgia) — the basics.

As told to us by a specialist in shipbuilding Victor Lissitzky, the ship is considered small, so a 7-point storm (waves 3-5 meters) is dangerous for him, even if the Board properly. Possible causes of the disaster, in his opinion, two or depreciation of the vessel and the cargo shift to one side because of pitching. “The service life of these ships for 15 years, that is, it came out 2.5 time — said El Lissitzky. — And given the information, RSMCs that the case broke down, he was clearly rusty. This could happen from shock waves when “Heroes Arsenal” launched by the wind to wave Board, as the ship became unmanageable due to stalled engines”.

Responded to the tragedy in the company-operator of the vessel. “The main thing now is to save people, to finish the rescue operation. According to preliminary data, this could happen due to bad weather conditions. Any vessel can sink under certain conditions, not always it depends on his condition. The ship was in good condition and insured,” — said journalists the lawyer of the Turkish Gunes shipping Selcuk Eseryel.