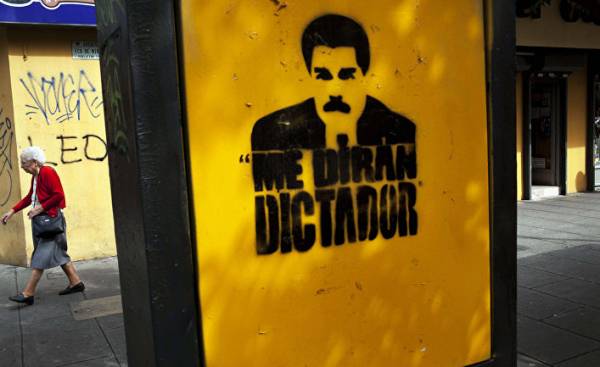 In recent days the impression that Latin America was hit by the tsunami news.

In Venezuela, the Parliament was deprived of legislative powers, which, however, he was soon returned. In Paraguay, demonstrators set fire to the Congress building, expressing dissatisfaction with the decision of the senators to approve the amendment allowing re-election of the President.

In Argentina the crowd, a huge amount of which did not expect even the President, Mauricio Macri, came out on the streets to support the leader of the country and to oppose strikes, pickets and noise, which raise the so-called “destabilizing forces” — peronista new formation.

Are there among these facts some kind of connection?

Yes and no. Yes, because Latin America is involved in the process of cultural and political transformation, which is the entire planet. No, because in each country, changes occur in specific, distinct from other context.

Events such as the election of Donald trump in the US, the decision of the British to leave the European Union, the revival of Russia with totalitarian ambitions, share a common binding thread.

In all cases, noticeable fatigue a significant part of the population from the political course, pursued since the democratic consensus that was established after the fall of the Berlin wall (1989).

This stratum of the population relying on social networks, are also extremely emotional and reacts violently to the transformation that accompanied this social contract. The vast recognition of the social, sexual, racial, and religious differences were never fully internalized it.

What happened in these instances was a response to the achievements made under the banner of liberalism and politically correct left.

However, it should be noted that this reaction is not typical of most. It occurs rather as a factor of social division, be it on social networks, in real life or in the election.

How this process manifests itself in Latin America?

In many ways very similar way. In countries where in recent days we received as much news as ever there are also acute social differences and maintained with increasingly fierce political debate.

In Argentina, after several weeks of anti-government rallies on the streets convened through social networks, the crowd, dressed in blue and white, to Express support for Greece.

The President of Argentina won the election in 2015 with a separation amounting to a total of 600 thousand votes, and now enjoys the endorsement of 53% of the population — an enviable figure for Latin America, which, however, tells us about 47% dissatisfied.

In Paraguay, the entrepreneurial style of policy Cartes benefited the macroeconomic indicators of the country, which is growing at a vigorous pace, and attracts foreign investment. But while tobacco tycoon leans to the sector from the times of the Stroessner dictatorship (1954-1989) was close to power, he, on the other hand, lacks the political skill to win the hearts of voters.

The lack of attention from the President to the less prosperous segments of the population and disregard for dialogue with Congress turned against a significant part of the country.

If he continues to enjoy the support of only one of the elite and businessmen associated with the Colorado party, it will lose the street, young people and voters of the middle and lower class. That’s why his attempt to change the Constitution to stay in power, failed.

Paraguay also enough differences, and angry disputes about the election of 2018 has already begun.

In Ecuador, this split is reflected within just a few blocks in Quito, where the Avenida de Los Shyris the crowd celebrated the victory of ruling party candidate Lenin Moreno, meanwhile, in front of the National electoral Council (CNE) supporters Guillermo Lasso protested over alleged rigging of the vote, in which Moreno scored 51.1% of the vote against 48.8 per cent of the Lasso.

Venezuela, an extreme case due to the fact that the current government has gone beyond all possible limits in their disrespect for the institutions and mismanagement of the economy, also fits into this process.

Except for recent years when the situation has deteriorated significantly, in the era of Chavez protests on both sides were not so rare.

Earlier, a heated debate flared up in the presidential election in Peru and the referendum on peace in Colombia.

I do not agree with the interpretations of analysts, who argue that Latin America makes a right turn. I do not think that in the last decade, Hispanics adhered to so leftist, now turned into reactionaries.

This explanation seems simplistic and not based on facts. The figures show that in none of the countries in one model has not been entirely replaced by another, which the voters gave their preference.

But they show that gone are the days when Latin American politicians have won a convincing election victory. The current era — a time of sharp political division between those who favor a more progressive model concerned with the question of social justice and those who prefer a more pragmatic and liberal model that promotes economic openness.

These two forces collided in the elections and took to the streets under its banner.

The role of the government becomes more conciliatory, less personalistic and populist. For lack of broad support for the government will be forced to coexist with the more militant opposition and to respect the institutions to ensure good governance and the rights of those who think differently. Otherwise, followed by new episodes of violence.

If we have the impression that in a matter of days in Latin America there have been many events, it is because at the same time on the surface was evidence of the new regional context. Perhaps now this will be normal state of Affairs in the region.