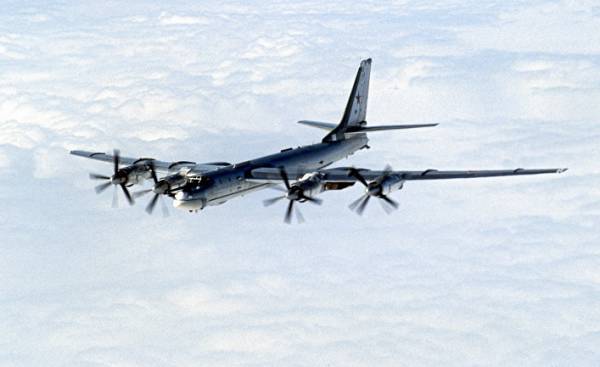 The American military establishment said that the flights of Russian bombers off the coast of Alaska, “nothing unusual.” In itself, this indicates that both countries are following the line that can be called something of a cross between the usual display of military might and strengthening of provocations.

On Monday, the U.S. F-22 fighter jets intercepted two Russian bombers in international airspace 100 miles off the island of Kodiak in the Alaska area. The representative of the U.S. defense Department called the actions of the parties “safe and professional”.

In less than a day an American reconnaissance plane spotted in the same area another two Russian bombers, which this time flew by removal 41 miles from Alaska.

Russian planes did not break air space of the United States, and representatives of the U.S. Department of defense said that the Russian action was not unusual and provocative. The United States and themselves perform such flights along the coast of China and Russia.

Moscow for its part said that “regularly carries out air patrols over neutral waters of Arctic, Atlantic, Pacific oceans and the Black sea”.

“All these flights are operated in strict accordance with international rules and respect national borders,” said in a written statement of the Russian Ministry of defense.

The events of this week clearly fall within the common aspirations of Russian President Vladimir Putin to prove that “Russia is back in the game,” says a former state Department official Howard Stoffer (Howard Stoffer).

“This kind of game of cat-and-mouse game continued for quite a long time, said Stoffer CNN. — Putin is trying to warn US about that Russian everywhere that they are again pushing the boundaries of their actions and increasing military power”.

“It’s one thing when you’re flying defiantly in order to get noticed, he said. — When the Russian fly at low level flight over the American ships, that’s unprofessional actions, since they interfere with work and dangerous for all parties… this is the hell of what is permitted”.

In February, U.S. officials confirmed the point of view of Stoffer, when the destroyer “porter” three times met with Russian planes, while in the Black sea. The flights of Russian aircraft were regarded as unsafe and unprofessional, because they flew dangerously close to an American ship. Moscow said that there was no danger in the actions of its aviation was not.

The last time Russian planes and noticed near the banks of us allies such as Japan. According to the statement of the Japanese Ministry of foreign Affairs, this month, the air force four times raised their fighters in the sky on alert in response to Russian action.

In addition, in recent months, the Russian reconnaissance ship “Victor Leonov” was twice spotted off the American coast.

Increased tension between Russia and the United States is not what optimistic said during his election campaign, President Donald trump, expressing hope for improving relations and cooperation. This month, he said that relations between the two former adversaries in the cold war “fell to a record low”.

This month, the two countries entered into serious conflict existing between them is deep strategic differences. The attack on the civilian population with chemical weapons, conducted on April 4, presumably the forces of Syrian President Bashar al-Assad, has infuriated trump. In response, he was ordered to strike with Tomahawk missiles at the Syrian airport, and changed his attitude to Russia, which supports Assad from the very beginning of a bloody civil war.

Russian foreign Minister Sergei Lavrov said the U.S. missile attack on the airfield in Syria is a failed attempt to derail the peace process in the country and change the regime. Russia condemned the strike, along with longtime U.S. enemy Iran.

“These attempts will not succeed, this will not happen, Lavrov said at a joint press conference with the foreign Ministers of Iran and Syria in Moscow. — We insist that the US and its allies respect the sovereignty of Syria and not allow any action fraught with serious consequences not only for regional but also for global security.”

The opposite point of view on the Ukrainian conflict have also become a “hot” topic for the Kremlin and the new us administration.

In February, the Russian foreign Ministry pointed out that Russia does not intend to return Crimea to Ukraine, as it believes it is part of Russia. The administration, trump said that he opposes such a position. Press Secretary of the White house Sean Spicer has previously said that trump holds a hard line against Russia and expects that Moscow will withdraw from the Crimea, occupied in 2014.

Meanwhile, the United States placed troops and military equipment across Europe in an attempt to reassure its European NATO allies after Russia’s actions in Ukraine. Last weekend, the U.S. air force sent the latest fighter stealth in the UK to demonstrate its military power.

Air operations for this week can be the usual military bravado, but because the two countries have been close in difficult military situations in some regions of the world, this increases the risk of escalation.

The us military has so far refrained from countering Russian aviation, which makes dangerous maneuvers of the type flown over the US Navy ships. However, Stoffer said that in the future possible responses.

According to him, the United States is unlikely to go to extreme measures and will not open fire on Russian ships or to shoot down the plane, committing dangerous maneuvers. However, he believes that any American commander could give the order to some other actions, say, to create intentional interference with radar or onboard electronics, causing the plane to crash.

If a slight provocation would escalate and create a situation close to a large-scale war, Moscow will be at a disadvantage, said the General, a retired air force Michael Hayden (Michael Hayden). “Nobody wants to fight with the Russian, but let me focus on another issue. Russians also do not want to fight with us,” the General said in an interview with CNN.

“They are much weaker,” added Hayden.