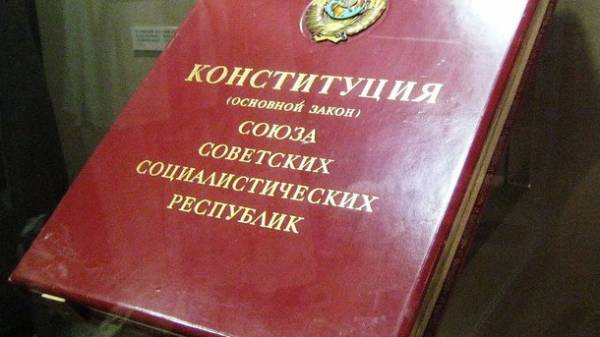 Ukraine is gradually saying goodbye to the legal inheritance of the USSR. The Cabinet approved the abolition of the mass of laws and regulations adopted during the Soviet era, except for international treaties. The last word for the Parliament. Just the scrap can go more than 5 thousand standards. “Today,” found the risks of this initiative and remember which rules the “scoop” can leave in the past.

TO CANCEL FOR THREE YEARS. The initiative to repeal all Soviet laws, in addition to international acts and two documents on which Ukraine became an independent state, was expressed by the Minister of justice Pavel Petrenko at the government meeting. While he said that in General, the entire process may take about three years. The first repealed all by-laws adopted by the ministries, departments, commissions and bureaux adopted before Ukraine gained independence. The head of the Ministry of justice predicts that it can happen after 6 months once the Parliament enacts the necessary legislation. Petrenko expects it will happen in the next month (the next time BP will meet may 16).

“During the year since the entry into force of this act, terminate all of the laws of the USSR and the Soviet Union are now operating in the territory of Ukraine. During the three years expire all codes that are working today,” he said. The Minister also added that only last year the government removed more than 360 acts adopted during the Union, and this year — already 100. Note that only similar documents in the database BP was about 5700! There is, for example, the decree on compulsory treatment and labor re-education of chronic alcoholics, idlers and drug addicts, published in 1960. In addition, one of the laws it is forbidden to sow in Ukraine Chui and Indian hemp. Finally, a still valid Decree of the Council of Ministers of the USSR on improving the study of the Russian language in Ukraine, according to which every year on these purposes from the budget to provide the money.

“YOU NEED CAREFULLY.” The lawyer of the Ukrainian Institute of national memory Sergey Ryabenko notes that we are talking about the abolition of the three codes adopted prior to 1991, Housing, Code of laws on labour and Economic procedure. “There is need to allocate Housing code, the preamble of which there are elements of Soviet and totalitarian propaganda. We may recall the law on rehabilitation of victims of political repression. There is of course no open propaganda of the Soviet Union, but today it is already obsolete. He also seems to contradict some other laws adopted later, including the package of laws on de-communization,” — said Ryabenko.

In turn, the political analyst Volodymyr Fesenko notes that such initiatives need to be careful: “for Example, is the highest attestation Commission, and what about the diplomas that were issued in Soviet period? We need to change outdated regulations, but cancel them all in a row, without considering the consequences, is extremely dangerous. And BP can support this rule, but it all depends on the readiness of the document.”

Risks: legal collapse, and the Crimea

In turn politekspert Ruslan Bortnik says about the risks of such initiatives. “If you undo all of that in one fell swoop, ill-conceived, it can cause serious damage to the legal system of the Ukrainian state and, moreover, create serious legal problems. I do not exclude even legal collapse. The fact that the Soviet authorities adopted many decisions, which relate to the Soviet state. For example, a decree on the establishment of the Kiev city court, was published in 1975 and is still in effect — its abolition will create problems for the people of Kiev. The same applies to laws on adoption in the Ukraine the Western part of the country — Zakarpattya, Bukovyna is all the decisions of the Supreme Council and the Presidium of the Ukrainian SSR. Again, the question of the transfer to us of the Crimea, — he said. — Therefore everything should be done gradually, considering all the legal nuances.” However, Ryabenko notes that questions the integrity of the Ukrainian state and the affiliation of those or other regions spelled out in the Constitution of Ukraine and does not rely on the Soviet legislation.