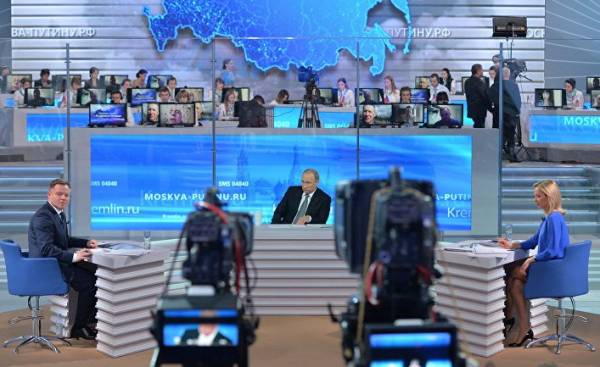 “Everything that comes from Russia is aggression, war, violence and lies,” wrote Miroslav Vaclavik in the discussion on the article on the iDnes portal “Russian threat to Europe is appalling. In Finland, the centre opens to combat misinformation.” Quote: “In recent months, Finland’s talking primarily about the Russian influence on the information. Neutral and the state has repeatedly expressed its concern about “the growing propaganda campaign” waged by the Kremlin due to the strengthening of cooperation with NATO”.

I don’t understand how our developed Western democracy might fear some kind of propaganda, if she is showing the world how they need to manage. What of the fact that it costs hundreds of thousands of lives, millions of refugees and a completely destroyed States mired in civil wars?

The most important thing that we have the only correct world democracy, so don’t criticize Saudi Arabia for what for homosexuality there are executed, and, conversely, don’t praise North Korea for the fact that there is homosexuality legal. Still ruled by the criminal regime in North Korea, not the country of our ally, Saudi Arabia.

If it turned out that no weapons of mass destruction were not found, and our “democracy” is still attacked by military means to this country, killed its President, absolutely destroyed Iraq and plunged it into a civil war that gave rise to “Islamic States” (banned in Russia as a terrorist organization — approx. ed.), so what? It just so happened.

When in Kiev mysterious snipers shot at the demonstrators and police, we overthrew the democratically elected President Yanukovych has laid on him the blame for the shooting and brought to power the new oligarchs. If the citizens of Crimea decided in free referendum to join Russia, and the population of Donbass refused to recognize the authority of the new oligarchs, then, of course, Putin’s fault that these Ukrainian citizens believe him and not the new Ukrainian rulers. We have ranked all the terrorists, who refused to listen to those approved by the West’s oligarchs, and thus blessed these oligarchs to murder a disgruntled Ukrainian citizens of Russian nationality in the Donbas. And who is to blame?

Of course, not our democracy, and Russian President Vladimir Putin because he did not consider the residents of Donbass, who did not want to become slaves of the new oligarchs, terrorists, and saw in them and helped them.

The rules in Syria is very stable as long as the West has not supported the color revolutions in the Arab world, where, among other things, “democratic” attacked and destroyed Libya, as well as allow her to kill President Gaddafi. Assad in Syria has failed to topple the West, but after the assistance provided to Assad by Putin, we should, as Democrats, to overthrow this evil. Therefore, we are ready to unite with anyone who is fighting with Assad, not excluding the “Islamic state”.

After all, all good. And when Assad and Putin began to win, and there was a threat that “Islamic state” in Syria will be defeated, we had to do something to prevent this victory. After all, the “Islamic state” is a lesser evil than Assad and Putin. So, as soon as there was footage of people affected by some toxic substance, we without any investigation “hung up” is a crime in Assad and Putin. And of course, we do not cease to bombard the position of Assad in order to simplify the war to ISIS and its militants.

I think I’ve said enough about how Western “democratic” media are informed about what is happening. In conclusion, just note that recently on the same resource, published an article about how the Finns found the recipe from the Russian propaganda called “the Finns got the recipe from propaganda. They are betting on education, not on the refutation of the lie”. How to understand our readers? Just a month ago, the Finns have found a recipe for how to overcome Pro-Russian propaganda, and now again worried?

So, dear Western politicians, political scientists, University teachers, employees of the Western and, of course, our media, don’t be surprised that fewer Europeans believes you. With lies you can’t overdo it. To believe a lie, you need to act cleverly and sometimes “pop” the truth. And the truth is in our and Western media I did not find the afternoon with fire…