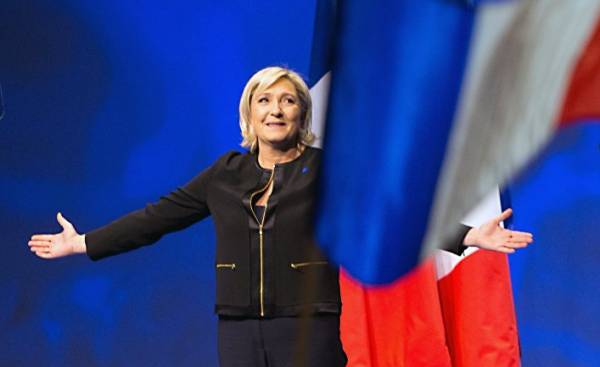 Le Figaro: do You offer an exit from the Eurozone. The majority of the French are against it, including pensioners, are ready to support NF, which nevertheless are afraid of hitting their savings. What will you tell them?

Marine Le Pen: First of all, I will say that I was the only candidate who offers them to Express their opinion about the European Union in a referendum. After the election I will negotiate and will require the Assembly of heads of States, without the European courts. Many European countries, South and East, waiting to get big and strong France took the lead and forced the EU to sit at the negotiating table. In addition, I’ll tell the French that leaving the Euro will not affect their savings. It is just the opposite. The greatest threat to them is the current situation pegged to the Euro banking Union which requires to withdraw savings in case of financial crisis. The majority of the French believe that the Euro is a burden. Return to adapted to the realities of the national currency will create millions of jobs and return us to freedom.

— If you are elected, interest rates will go up from 8 may…

— No! No panic will not. Now we see interest rate minimal movement, which also was artificially organized to influence elections.

— However, markets may calculate that the risk for France is more important…

— You can always come up with thousands of hypotheses. But most of them are false. We’ve seen it with PACSICOM: designed to intimidate voters apocalyptic predictions were refuted by facts.

— The French do not be tempted to place money abroad, like in 1981?

— I don’t believe it for a moment. The French know that I will ask their opinion. Today will be more profitable to invest in France.

— In case of failure in the referendum will you go?

— I do not think the policy of the Rodeo, which will do anything to stay in the saddle.

You propose to retire at age 60 with 40 years of contributions. We are talking about a very costly measure, accounting for changes in demographics.

— I do not agree to the French under any circumstances demanded sacrifices, not reducing pre-malware state expenses: net losses transfers of the EU, tax evasion and social security contributions, nonsense decentralization, expenditure in connection with legal and illegal migration. My project involves the creation of three years, 1.7 million jobs that will give 25 billion euros of additional revenue for the social security system. Pension at age 60 will cost 17 billion euros.

— What is your economic program differs from the program of Jean-Luc Mélenchon?

— Jean-Luc mélenchon wants to impose additional taxes on $ 100 billion! He was in favour of mass immigration, which leads to a decrease in salaries. Take the Directive on the splitting of the workers. The result is from 300 to 500 thousand people came for financial reasons. All of this is a kind of internal delocalization. I note that his opposition to this Directive is very recent… He was always an ardent supporter of immigration.

— François Fillon with a rigid safety program and immigration. How does it differ from yours?

— In everything. Personally, I have seen the Fillon in power. I do not judge him by the promises he had made them ten years ago. I judge him by his actions: staff reductions of 54 thousand soldiers and 12 thousand 500 police officers, the disruption of intelligence, unwillingness to return to national borders, the opening of the largest mosque in Europe, the influence of the Union of Islamic organizations of France, support for the war in Libya… Why Fillon changed my mind about SIOP? I have always adhered to the same position. Islamic fundamentalism has spread throughout our society, with the connivance and treachery of the political authorities, both at national and local level.

— How to fight this fundamentalism?

— There are some steps that must be taken immediately. This expulsion of aliens posing a threat to the security of the country, the revocation of a Waltz on the registration of illegal immigrants, a moratorium on the issuance of certain documents, freezing of loans and the state of medical care submitted the application for asylum migrants….After September I want to hold a referendum on revising the Constitution to restore the rule of the new law over the past European treaties. We need to put the levers in their hands.

Are you afraid to provoke the hostility of the French Muslims?

— Not at all. French Muslims are waiting for only one thing: release from the everyday pressure from Islamist fundamentalists.

— Part of an undemocratic-minded ultra aggressive disagreeing to obey the will of the people. And if one or two of the diplomat do not want to work, good riddance.

— The state of Israel does not apply to ultralevel, however, condemned your statements about flying in the velodrome…

— The state of Israel was misled by so-called representative associations, which, I think, made a vile and baseless statement. I stuck on this issue Gaullist position.

— You consider, what used in France was better?

France will be better in the future, if elected. The current presidential elections were almost a referendum for or against wild globalization. Our values, customs, morals and way of life collapse. If a country loses its identity and idea of what it is, what is the path and what is its true wealth, it is falling apart. I want to prescribe in the Constitution the protection and promotion of historical and cultural heritage of France, to return to our country the status of a political power. This pad is our new conquest of the world! Because I want to go to the conquest of the world. I want to resume relations with Africa, to defend the Francophonie.

— So you have a globalized view of France.

— You are mistaken. Globalism is the elimination of restrictions in all areas. This abolition of borders, the disappearance of roots… I am the candidate boundaries and be the President of the borders. We need to return to them in order to protect the French people. They need the school to restore the authority of justice, against wild globalization, against unfair international competition, against abuses of tax evasion. Freedom is not without borders.

— To carry out the proposed reforms is needed most. How to get it?

French — serial and logical people. When they elect someone head of state, then give him the controls. I don’t see anything that could go against this rule.

— Some components of your program go far left, others far to the right. As to “stabilize” it most?

I don’t believe in the section on the right and the left. He pegged those who want to stay in power. The real split is between patriots and globalists. On my side, the side of the French nation, there are policies that I would really like to see in our ranks, before the election, during the break between the two rounds or after them. I extend my hand to all who are committed to the sovereignty and identity of our people. I tell them: “Come, participate, form the presidential majority!” Nation is love. Together we will rebuild a nation that loves himself.

— If you come to power, will not undermine your legitimacy of the proceedings?

— These proceedings, as you say, does not affect my honesty and are all plastic. In addition, there is the presidential immunity, the institutions of the fifth Republic. The main goal is stability.

— Which candidate would you prefer to meet in the second round?

— Macron — uninhibited globalist, and Fillon — bashful globalist. I would prefer to compete with a relaxed globalist. At least in this case, all will be clear. According to surveys, my results are higher than those of Fillon against the Makron. So to support me — a more useful solution than to vote for Fillon.

— Republican front may interfere with your victory.

— If we see a coalition of “Republicans” and the socialist party in the second round, the result will be one big globalist party. The main issue of this election — civilization. The French feel it. And if Fillon will call to vote for the Macron, I’m not sure most of his constituents agree with that.

— What do you think about narrowing gaps in the polls?

— Closing the gap — the classic phenomenon of a so-called “minor candidates.”

— What is your mood before the first round?

— I am calm and confident. I am confident in my team and the French. They will allow me to realize. I’ll go all in the first round. And I am convinced.