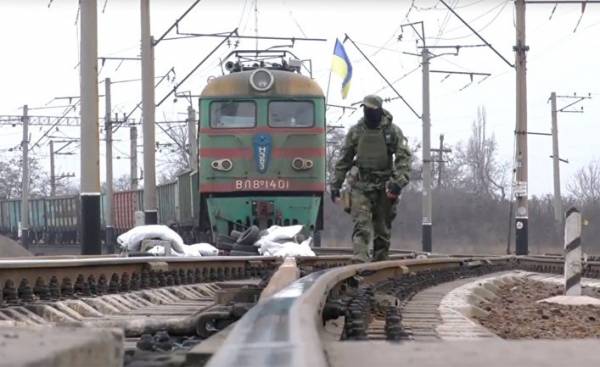 The theme of Georgians in Ukraine was mostly in the context of reformers led by Mikheil Saakashvili, who appeared in Kiev in 2014. Those Georgians, who from the beginning of the war in Donbass fighting on the side of Ukrainians, mentioned less.

We leave the car on the outskirts of the village in the Luhansk region, on the road to salute their commander the soldiers ran out. On your form, in addition to Ukrainian insignia, they wear the stripes of the Georgian national Legion. 38-year-old Mamuka Mamulashvili, officer and diplomat, recently returned to the front from the US, where he held a number of meetings, talking about the war in Ukraine.

Next are the positions with trenches and about 800 metres are Pro-Russian militants. After sunset here is restless. Mamulashvili is a living legend. He became a hero at age 14. His father, a Georgian General, he commanded a division during the war in Abkhazia in the early 1990-ies. “He took me with him to the war. For Georgians, this is normal. A whole year I took part in the fighting, and then we together with his father was captured, we were kept Russian secret services” — says Mamulashvili. Three months later they were exchanged for captured Abkhazians. Mamulashvili speaks several languages, he studied in Tbilisi and Paris, where he received a diplomatic education. He remained faithful to the family tradition: he served in the army and fought in the informal armed groups. “I several times fought with Russia. Georgia did not recognize it openly, but we helped the Chechens,” — says Mamulashvili. His father is also fighting in the Donbass, he is now in the Kiev base of the Legion.

Georgians are the largest group of foreigners since the war started howling on the side of Ukraine. “We were in Donbass in April 2014. First there were six of us. I created a Legion a month before the conflict began, when it became clear that Ukraine expects a war. Slowly our ranks filled, now it is the company,” — said Mamulashvili. They fought on different fronts, often acting as a sabotage group. In February 2016 the Legion, which had about 100 fighters, included in the 25th battalion “Kievan Rus”.

Began to fight in childhood is not just the commander. “I’ve been fighting with for 15 years: Ossetia, Abkhazia, Nagorno-Karabakh, Georgia in 2008. This is my fifth war. I’m not afraid, fear is a stranger to me. I died four times already. In Abkhazia in my car three times, got a shell,” says 42-year-old driver of the BMP Zviad Maisuradze.

28-year-old Dimitri Javakhishvili also feels no fear, at least in this war. Much harder was during a mission in Afghanistan where he spent six months.

“It was scary, they would act as suicide bombers. It was mined: the man, the machine, even lying on the road dead gobbler. Our base broke, a suicide bomber on the car, ten people from our battalion were killed and 45 were injured”, — says Javakhishvili. After returning from Afghanistan, he worked in the Georgian Ministry of defense, and when he ended there contract, went to Ukraine. In the Legion he is both a sniper and a doctor.

Random people in the Georgian subdivision no. It is composed of only professionals who fought on the territory of the former USSR or were involved in operations in Afghanistan and Iraq. Among them are officers, but the Ukrainian war, they fight like ordinary foot soldiers.

“Amateurs, we do not take. We take people past one or two wars. We have soldiers, who had been on international missions. This is a very valuable resource for the Ukrainian army, who have high morale and there may be great trainers for local military,” — emphasizes Mamulashvili.

The Georgians reigns discipline, in the service — no alcohol. The high level of preparation demonstrated by the fact that for eighteen years they have not lost a single fighter. In January, the Legion carried out a successful operation, capturing enemy positions in the area of Pervomaisk and Stakhanov in Luhansk region.

“We travelled two and a half or even three miles. There was previously occupied by militants and Russian forces, now are our soldiers. We have taken this plot without suffering losses,” — says the commander. The captured position was named in honor of Sukhumi the capital of Abkhazia.

“There is only one smell — the smell of gunpowder. Just kidding — laughs Javakhishvili. — Of course, if you know what a military adrenaline, you’re going to find him, but I was here not so” — with a serious face he adds.

In Ukraine were not adventurers. These people are United by a sense of community and a clear goal. “It’s not the shooting or the smell of gunpowder. I was born a free man. Look at these guys: here it is — the truth and honor. I know that they will not leave me, and I will not leave them, too,” explains Mamulashvili.

These people remember that during the war in Abkhazia, the Ukrainians came to their aid and fought on their side as volunteers. The enemy remains the same, therefore, the participation in the Ukrainian conflict seems to them quite natural.

“Then was the same Russian aggression, which we encountered in the Ukraine. Russia invaded a sovereign state. We fight side by side with the Ukrainians, because Georgia experienced the same war, and they were the only one who had helped her,” — said Mamulashvili.

Georgian soldiers became the first foreigners who had the opportunity to serve in the ranks of the Ukrainian army on legal grounds. The problem, of course, arise. Ukrainian border guards have discharged their fines for violation of visa-free stay, and to returnees in Georgia the soldiers were any questions from the local security services. Most of the fighters were associated with the previous leadership, however, Mamulashvili said that his unit does not support direct contacts with the people in Ukraine, Georgian politicians.

“It is bad that we associate with politicians. Legion since its creation no support, Saakashvili didn’t do it too. We are United by the struggle with Russia and the desire to help Ukraine. I don’t want some politicians used our name,” explains Mamulashvili.

Unlike many soldiers serving in other departments, no one here is counting the days before returning home. The Georgians say they will stay at the front for as long as need be. “We’re not going back until you win the war. Now we see how the modern world is opposed to the splinter of the Soviet Union. I don’t want to Ukraine was a mistake, which will lead to a new war,” — said Mamulashvili.

The commander of the Legion wants to turn his company in the battalion. He plans to take new volunteers (not only Georgian) and train them using methods, which developed from his unit.