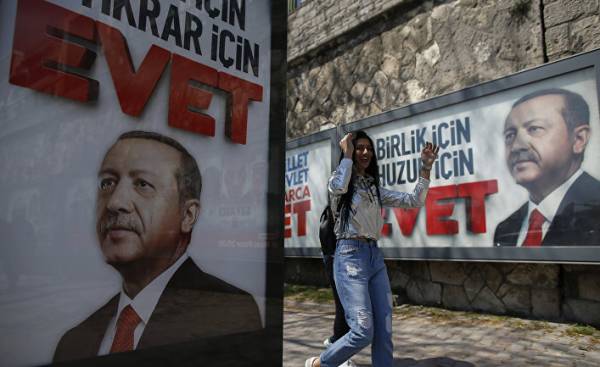 In those hours when I wrote this article, most of the ballot boxes was opened, but the results are still constantly changing.

At the beginning of the counting of votes in some areas and districts ahead with a noticeable margin was vote “Yes”, in others “no.”

Over time, this gap has narrowed, and when he opened 99.9% of the ballot boxes, “Yes” in the whole of Turkey said 51,35%, “no” — 48,65%. Listening to many who spoke on television, you would think that the referendum takes place between “the AKP / MHP and CHP (the Party of justice and development / the nationalist movement Party, the Republican people’s party)” or blocks “Erdogan for” and “against Erdogan”. Numbers, for example, disclosed in the form of: “voices recruited AKP” and “the voice, dialed the CHP”. This, in my opinion, was a grave mistake.

The referendum on amendments to the Constitution was something of a “competition between the parties.”

In the referendum the electorate of the CHP showed even greater activity than on the election, but the front “those who were opposed to” not represent any one party or single mass. And the results were so crisp, which was denied, for example, words about IPA, — “voted by party affiliation”.

All of the party…

Among those who were going to say “no,” was the CHP and its members, but, for example, it was clear that a significant part of the electorate of the MHP will not go behind Bahceli (Bahçeli, the MHP leader — approx. TRANS.). Democratic party (HDP), felicity Party, the liberal democratic party and a party that have not been restrictive barrier, as well as those who do not approve of the changes to be undertaken, and does not support a particular party, was also among the supporters vote “no.”

It is noteworthy that in such large regions as Ankara, Istanbul, Izmir, Adana, Antalya, vote “no” was ahead, although from time to time, the situation has changed…

Another fact that draws attention to itself: although it was said that in the Kurdish areas dominated by the “no” vote, it was not quite right.

Despite the fact that some politicians were arrested DPN, and DPN are not tired to repeat the intention to vote “no” in all districts of the South-East of the country, it had the same effect. In speeches on television during the preparations for the referendum often heard accents like “despite the unequal campaign, major rallies, despite the fact that “Yes” was mobilized all the capabilities of the state.”

The result by a small margin!

The results of the referendum no one will be considered a victory because the votes are evenly distributed, but primarily for Bahceli’s defeat.

Because the electorate of the MHP is leaning towards “no”, regardless of which side is Bahceli. This result will launch in the ranks of the IPA movement, which can reach up to the emergence of even more persistent demands to convene an extraordinary Congress of the party and even care Bahceli as leader.

In my opinion, the outcome of the referendum not only reflect the extreme polarization of Turkish society, but also show that the electorate of each party asks: “What this change will bring the country and what to deny?”. A small difference in two percent (about 51% in favor of “Yes” and about 49% in favor of “no”) does not mean defeat, but also hard to say that “the people sincerely wished for these changes and willingly supported them.” Let’s hope that in the coming period, this fact does not entail a new wave of anxiety, instability, a new debate on the elections and will be useful for the country.