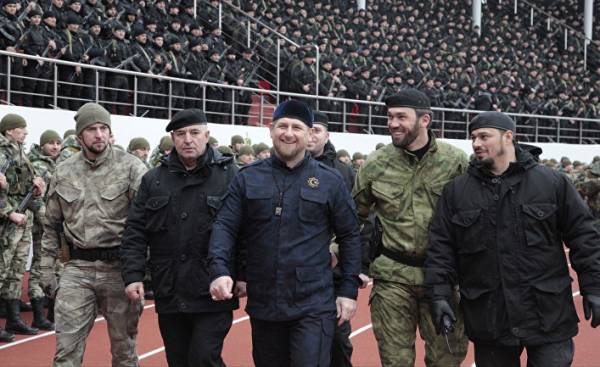 When Denmark and other States condemn torture, to which homosexuals are subjected to in Chechnya, it has no effect.

This is the assessment of Helen Krag (Helen Krag), which as a researcher of minority issues and works at the University of Copenhagen, for many years engaged in the study of the Russian Autonomous republics in the Caucasus.

“If the political leadership of Chechnya doesn’t want to have no homosexuals, then so be it, regardless of what others think,” she says.

“Chechnya — this is a very sad problem”

In early April, Chechnya has opened a real hunt for homosexuals, it is argued that over the past two weeks about 100 Chechens were arrested and subjected to bullying, at least three were killed, according to reports in the international media and LGBT organizations.

This provoked condemnation from political leaders from Canada, the UK and the EU, in particular, and here in Denmark, LGBT Danmark has sent a letter today Anders Samuelsen in which the organization urged the Minister of foreign Affairs to join its protest and Supplement your tweet about the situation in Chechnya an official condemnation on behalf of the Danish state.

“It is necessary that the governments of the world more strongly condemned what is happening and take action”.

Thus, LGBT Danmark is joining the chorus of organizations and human rights activists who want the international community intervened and put an end to the persecution of homosexuals in Chechnya.

Despite great intentions, official condemnation from political leaders and the attention of the international media, neither Chechnya nor Russia, most likely your course will not change, says Helen Krag.

She explains that Chechnya can be regarded as a totalitarian dictatorship, supported by Russia, and therefore, the eccentric leader of the Autonomous Republic Ramzan Kadyrov does not care how it relates to the rest of the world.

“You can say to Putin that “we don’t like it”, but I don’t think it will help. Homosexuals in Russia live a difficult life, and Putin took the situation in Chechnya.”

“To exert pressure on Chechnya there is absolutely no way,” emphasizes Helen Krag.

Dmitry Peskov, press Secretary of Russian President Vladimir Putin today told AP news Agency that “Russia does not have reliable information about the problems in the region”, and earlier this week, press Secretary of Chechen leader Ramzan Kadyrov said that “it is impossible to hold and prosecute people who are in the country just no.”

Press Secretary of the Chechen leadership also said yesterday on state television that there were plans “to respond to the fictions of” the journalists of the independent Russian newspaper “Novaya Gazeta”, when “New” was the first media who wrote about the persecution of homosexuals in Chechnya. Hence the story subsequently spread around the world.

Stability in exchange for freedom to reign

The explanation why Russia turns a blind eye to the dictatorial regime of Kadyrov in Chechnya, it is possible to find, a little digging into the history, says Helena Krag.

After the collapse of the Soviet Union, Chechnya has been the scene of fierce battles in the 1990s and in 2000-e years. Chechen activists almost succeeded to secede from Russia and to declare a Republic as an independent state.

The Russian leadership put an end to this plan by using brutal military operation, and then the government in the Kremlin has appointed Ramzan Kadyrov as the political leader of Chechnya.

Helen Krag says that the Russians Ramzan Kadyrov is the guarantor of stability in Chechnya and that the inhabitants of the Republic will not carry out attacks in Russia.

As a “fee” for the stability of Ramzan Kadyrov received the freedom of action in the country, the ability to edit as he wants, besides Moscow supports Chechnya economically. After Ramzan Kadyrov took office, he introduced Islamic rule, which, in particular, expressed in the formal requirement that the women went with their heads covered.

About the conditions in which they live in Chechnya, people, Helena Krag, in particular, learned a few years ago when I met a few Chechens at the conference in Georgia.

“They told me that actually not supposed to talk to me, because if you do, it will affect the career of their children. By doing this, they risked their lives,” she says.

In the light of history and of relations with Russia, according to the researcher of minority issues, so it is highly unlikely that Putin is an example of a measure against the persecution of homosexuals in Chechnya, despite all the pressure from the international community.

“Kadyrov is very young, to die is not going to. So he will reign for a long time”, says Helen Krag.